Cats and dogs and other beasts

Marmalade infuses the latest generation of male cats living off Katherina, us and the Leftheris. When I'm not taking them for granted, it will amaze me that humans can have creatures of such lively beauty living among them, along with the undemanding butterflies, the itinerant swallows that glue their nests to our eaves and help control the mosquitoes that leave us itching in the morning, the wasps and hornets which - getting too near - we drown in plastic traps of honied wine, the ants that annoy, the trampy dogs of no fixed abode, the lizards and geckos fixed to stones that catch our eye when they dart and, drawing our gaze with their cries, the eagles circling over the crags above the village.
* * *
Reading on through Calligas' thesis, I’m learning how the personality of different High Commissioners flavoured, what she calls, the Ionian politeia from 1815 to 1864. I need to be aware of the significance of events in the other islands within the British Protectorate – Santa Maura (now Levkas), Ithaca, Paxos, even distant Kithera beyond mainland Pylos, used as a place of exile for radicals, but especially Zakinthos and Cephalonia. I need to be aware of the deeply resented economic rule of the landowning signorini who as part of the office holding Camarilla, clung to offices held long before the British Protectorate, ever opposing liberal reforms introduced by successive commissioners to mend the harm done by Sir Thomas Maitland’s belief in the civilizing potential of authoritarianism when dealing with those he saw as culturally inferior. I need to be aware of different commissioner’s attempts to create a voting system across the Septinsula that, at least later, was meant to set the conditions for evolving autonomny – policies overseen by Colonial Ministers of varying political flavours in London, whose messages took 12 days to get to the islands – an interval that could separate a Commissioner from the rhythm of local events. I need to understand different commissioners’ reactions to the rebellions in Leucas and especially Cephalonia - notorious for Sir Henry’s Ward’s lethal over-reaction to the second peasant revolt there, with executions and unrecorded floggings, disproportionate - in numbers judicially killed - to the murders of landlords and their servants. I need to be aware of the tide of revolutionary thinking coming from Ionians educated in Italy and France and spread through local printing presses, private clubs, songs and celebrations in Cephalonia and Zakinthos, and of course the infusion of Hellenic nationalism from the mainland, with constant taunting of the British by the Rizospastai - Girolamo Pretenderi, from Cephalonia, ‘insolently’ naming his dog ‘Douglas’ after Lord High Commissioner Sir Hugh Douglas (Calligas p.89).
Calligas takes me through the short sojourn of the first High Commissioner, Sir James Cambell, who took over from the military governorship of Major Oswald in 1813, the rule of Maitland (1816-23) and his notoriously monarchical constitution – Ionians dubbed him ‘King Tom’ - giving him veto over the Senate and its Assembly, followed by Sir Frederick Adam (23-32), George Grenville, Lord Nugent (32-35), Sir Howard Douglas (35-40), James Alexander Stewart-Mackenzie (41-43), John Colborn, Lord Seaton (43-49), Sir Henry Ward (49-55), Sir John Young (55-59), the Extraordinary Commissionership over 12 weeks of William Ewart Gladstone (Nov 58-Feb 59), Sir Henry Storks (59-64) who at the end of the Protectorate on 21 May 1864 handed the office to the President of the Ionian Parliament, Count Dimitrios Nikolaou Karousos. This period is now generations past, in our timing ‘long long ago’ – yet history made in that period is engraved in Ionian architecture, and the more I learn of it, the more distinctly I taste its flavours in the present politeia of Corfu.
** ** **
Met another bright person, married to someone who’d lost his job – seven years before being eligible for a pension who said – with swift apologies in case we were affected – this thing’s good if it weans us off credit. The same as Kim and others have said even as they experience – on spouse, children, colleagues and friends the ill-effects of depression. Fran says it’s after the Greek General Election on 4th October “Things will start to hurt here.” Richard P told us of builders without work on land Britons were going to have homes. They’ve no longer the cash in £s against a € worth half as much again as when came. We see more houses semi-completed; lots for sale since we came here three years ago – leaf strewn with sun-dried notices, and homes bought to live in, being rented. 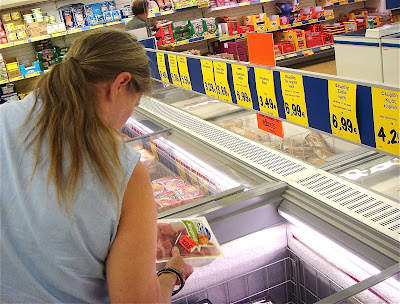 In Lidl we mutter, put things back, look for cheaper. More almost certainly are working in nero. In the stats unemployment levels are in single fingers until you go to women and the young:

Yet for some the year’s been OK. People who charter boats continue to, and have booked for 2010. The ingenious switch their pitch, relying on the cushioned, drawing on reserves. Meantime less concrete is laid, less land cleared, fewer trees chopped, but a rush to get footings laid against the bite of development control legislation and the Hellenic Cadastre
Posted by sibadd