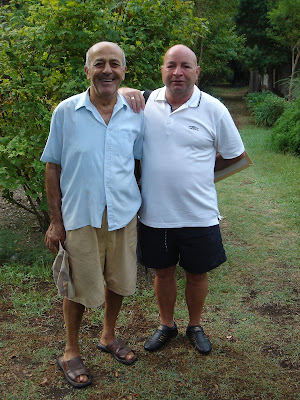 George, Caretaker and Frank, Remembrancer - 20 September 2009
I'd heard of George Psailas from Frank Carrick in 2007. He'd posted an account on the web about the Corfu Channel Incident that had led to the deaths of 44 British sailors when their ships – HMS Volage and HMS Saumarez - struck Albanian laid mines on 22 October 1946. Those whose bodies were recovered were buried by George, who inherited custodianship of the British Cemetery in Corfu from his father, having been born there in 1929, living the last 80 years just inside its gates. 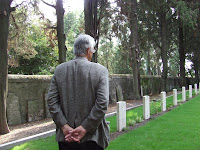 In 1946 he must have been about the same age as many of those he laid to rest. Frank, like me, is a remembrancer, though he states the purpose more clearly “As I see it, Simon, you’re not dead until you’re forgotten.”
He and his wife Fiona live in a town west of Glasgow. As well as a few exchanges on the web, our paths had crossed in that city, unknown to me, arriving at Glasgow Queen Street at the end of July, he’d seen dog Oscar, his lead attached to my luggage, as I strolled the concourse waiting for a train to Inverness.
This time I collected Frank in Dassia at 9.30 Sunday morning. We drove to town, entering San Rocco Square from Polichroni Konstanda, which follows from the road by the General Hospital; then straight out of the square on Dimoulitsa bearing left after a 100 metres on Kolokotroni which, just after the main entrance to the cemetery, brought us to a postern gate in Corfiot green that rang a small bell opening to a whiff of jasmine and the effusions of a cottage garden – tended but unmarshalled – that gave way to walks lined with trees and shrubs, dotted with the promise of flowers, offering various routes to separate spaces with seats and places to stand and gaze.(Frank's photos of our visit) 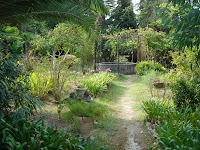 George, who’d come at the bell to welcome us, left us to stroll, but seemed to appear at the end of different aisles, tending, answering questions, pointing to particular graves – in many cases of men who’d not grown old, not all killed in action, but like Rupert Brooke and Byron, died by accident or disease while intending to. Frank has been here several times before; collecting knowledge especially about our long naval links with Corfu; studied the accounts of what happened in 1946; left poppies and a wreath. I was as entranced with the place as he, unused to the ambiance of so solicitous a stewardship, apprehensive for its continuity. The impulse to lay concrete has spread even here. The Commonwealth War Graves Commission, no doubt with responsible intent - to preserve, avoid litigation, or meet military specification - has encased the footings of newer memorials in rectangular slabs of smooth cement six inches above the surrounding ground, distancing those remembered, including those British, Greek and Germans (from a better era) who did grow old recording their love for one another and the place (‘Resting in Corfu a place so loved’ ‘Goodnight my love I will be up later’ ‘True Corfiote she loved England and was dearly loved by her many English friends’), from the piney soil, moss and flowers, the stumbling passage of tortoises and the companionable diversity of neighbouring graves inside the leafy walls and beneath the trees that absorb the noise of the city’s bustling traffic. Is it that the world seems too chaotic that they must cast part of it in the amalgam of the day, opposing the sanctuary’s gentle entropy? If a wooden cross in memory of 20 year-old Stoker John Jackson of HMS Forte can survive with a few repairs, a little cracked and tilted since 1897, can’t the Commission let those in their care lie as close as he to the same rich earth? "I have a photo of those stokers. There were seven of them" said George "and they must have made up that cross for John Jackson between them." 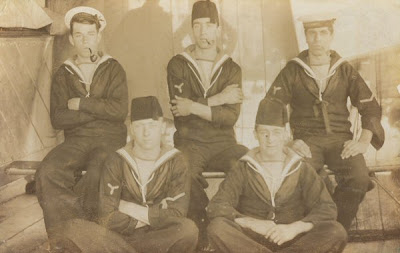 Some of HMS Forte's stokers
I dropped him off near the Liston to take a pre-war black and white photo of a taverna there, showing ratings from HMS Hood, then our greatest battleship, posing cheerfully in their best whites. 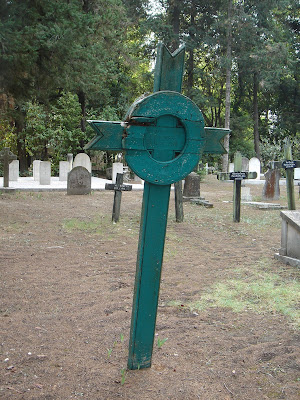 I noted the plaque for Pippa Hughes who in 1992 died of cancer, so George told us, in post as Corfu's British Consul – only 45

‘…Nay I could all but understand wherefore through heaven the white moon ranges and just when, out of her soft fifty changes no unfamiliar face might overlook me, God suddenly took me…’

I’m almost certain she asked for those lines from Browning's naughty poem. 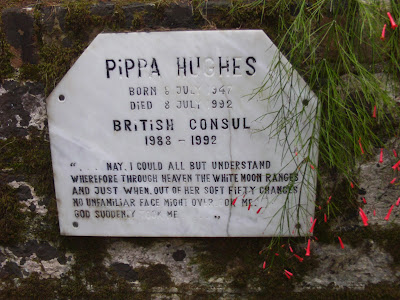 * * *
Ian came round on Saturday to look at our stove pipe and other things. Nick and Nancy, whose house in Skripero he’s helping restore, had told us that Ian “likes fixing other people’s mistakes”. Our chimney won’t draw, leaving smoke in the house and internal joints more prone to drip goo. We need a longer pipe outside, a supporting bracket to cope with gales, and a twirler at the top that, unlike ours that won’t turn at all, revolves in the slightest breeze. “It’s tricky to get at,” said Lin, “we really need it working by winter.” Ian peered out of our back bedroom window, ducked back at wasps swirling from the eaves. “I have to watch out for them. One sting and …” he signed the effect. “It can be done when they’re gone?” “No problem” We’d leave the details, a key, and the new parts with Sally on whose house near ours he’s also working. Then we discussed replacing the external steps to a balcony and door on our upper floor, incomprehensibly removed by the previous owners’ builder. He’d get an estimate and we’d plan that for next year.
** ** **
Was this because we tried to kill the wasps in the roof last night? Am I watching too many films? Eating too much cheese? Reason asleep, I woke from a loathsome dream in which some militia man was teaching us recruits his “interesting” discovery – handcuff two captives sat back to back and … “Watch this.” He shoots one in the head. He slumps; switched off. The other looks outward, the backsplat of blood freckling her cheeks, smiling bravely at us, so it seemed to me. “No” he says flicking his fingers at her unblinking eyes; the grin rictus. “She’s oblivious.”

After getting myself a drink of water I recovered by the windows looking out over the island, hours before sunrise. I could see the mainland lights of Sayaida – not white lights from small streets but the high arc of public lighting on the harbour and the roads – yellow turned orange by thirteen nautical miles of sea strewn with the blaze of ships, some anchored off, others slowly moving; on land below the house, the familiar constellations of street lighting below the village and miles southward, darkened land suffused with the doppler of engines. A few cocks crow in memory of the withering spirit of place; the exhaustion of the gift suggested by Lawrence Durrell, about the time I was born, that ‘Greece offers you … the discovery of yourself.’ I enjoyed and evaded that when, in youth, I scrambled down scrubby hills below Delphi, seeking a glimpse of sheep attached to distant bells – and on countless other occasions that I had Greece to myself on land and sea. Durrell’s use of the word ‘offer’ implies just that possibility – to uncover and reject a personal paradise, forced out by sword, or more likely, through volition, with the dawn of common day. Innocence lasts with children who die or unformed minds fixed in infancy. With age - mine and this cementing land's - and tho' nothing's more important, Greece no longer makes me that offer.
* * *
Talking to mum on the phone the chance she can come here next Easter increases, especially with Mark's assurance of making a small ramp to get her wheelchair down our steps when she comes to us, perhaps booked in to a suitable hotel. "One way or another I'm determined to do it. I'll bring my walker, if you find a wheelchair there." One of the places we'd definitely go was where we picnic'd yesterday with Honey and Alan, by the shore below Mon Repos - a lovely Sunday afternoon ending at Alan's house with scones, jam, clotted cream and real lemonade made by Honey. 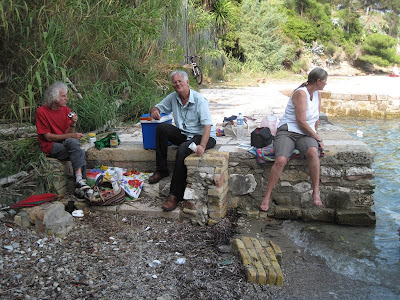