Work and play - learning about the Rizospastai

Keith Kelly, Research and Publications, Yoko Miyamoto, Assistant Director and Noboro Fujishima, Director of the Japan Local Government Centre in London at the Bullring. They came as our guests to Birmingham, to get a glimpse of our city's regeneration from Jon Bloomfield, Head of European Policy at Advantage West Midlands, 10 years Head of Re

gional, European and International Division at Birmingham City Council.
After two hours walking and talking round the centre, we had lunch at Bank Restaurant, then taxi'd to Edgbaston campus so they could see where we run their October programme for young local government managers from Japan - an event I've run for over a decade.
The recession is eating into the momentum of regeneration. Not dramatically, not obviously. The effect is in the small indicators. Decreasing business start-ups, abandoned leases of commercial premises, to let and for sale signs, construction work slowed or stopped, fewer and fewer tenancies of city centre residences being taken up and others abandoned. It's too quiet.
* * * 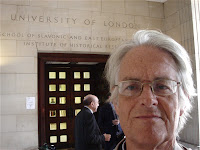 On Wednesday I was in Cumbria - there and back overnight - to animate a session on new ways of doing scrutiny. Then on Thursday I started to meet the Ionians involved in opposing the British presence in the islands through finally starting to read Eleni Calligas' dissertation The `Rizospastai': politics and nationalism in the British Protectorate of the Ionian Islands 1815-1864. After the British Library told me they had no idea when the thesis would be on-line, Calligas' doctoral supervisor pointed me to the Institute for Historical Research. "There may be a copy there." It's right below the tall Senate House of London University and I was there by 9.30. The librarian bought me the dissertation. I started reading. I ran through references, scanned the chapter list, began to get a feel for how the thesis had been put together. 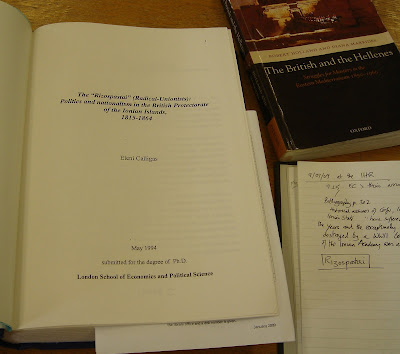 So far I've been studying this story from the British perspective. Now I discover figures - vital to the radical movements that developed and diverged in the Ionian islands in the years leading up to the end of the British Protectorate - roughly 1840s to 1860s. Up until now the Rizospastai* have been a clamour in the wings of an English theatre. Now, thanks to Calligas, another dimension of Ionian history begins to emerge - especially the important part played by political activity on the other Ionian Islands; Zakinthos [Ζάκυνθος, Zante] and Cephalonia [Kefallonia, Κεφαλλονιά, Kefalonia, Cephalonia, Kefallinia] in particular.
Calligas' thesis is that Zervos, from Cephalonia, was a radical who wanted to end the Protectorate so that the Ionian Islands - Ιονίων Νησιών - could become an independent self-governing republic. After British reforms and imprisonment and exile had temporarily silenced Zervos and his companions, another radical - Constantinos Lombardos [Κωνσταντίνος Λομβάρδος] - from a different Ionian island, Zante, emerged. Lombardos campaigned vigorously for the end of Protectorate in the name of union with the Greek Kingdom.

As enosis approached, Zervos and his fellow radicals, free again, found themselves in the anomalous position of appearing to oppose it, when in fact what they wanted was to ensure that the terms of the union would affirm their radical principals. What they feared was that the British would cede the Ionian islands to the Greek Kingdom without setting conditions for the realisation of those principals. Lombardos was more pragmatic, less of an intellectual. For him and his followers enosis was an end in itself. Lombardos and Zervos were both radicals but they were very different personalities. 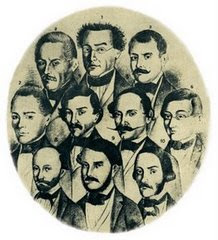 *disambiguation: Rizopastis - Ριζοσπάστης - is the name given to the official newspaper, started in 1916, of today's Greek Communist Party
*** ***
I was pondering recent remarks made by a celebrity arguing that, unlike democracies, dictators "get things done!" Hm? I suppose dictators are more efficient at ensuring, through fear and enchantment, that their subjectivity is accepted as objective - a phenomenon captured long ago by Hans Anderson's tale of shared delusion, The Emperor's New Clothes. So called 'strong leaders' can reduce a messy plurality of opinion to a party line. They're efficiency is in suppressing evidence of inefficiency. In a democracy you can try and find your way to something approximating truth via many lies, spins and half-truths, in a dictatorship there is one truth, and that is not a truthful way to understand the world. How can you debate the difference between democracy and fascism? A paragraph from the first page of 'The Conflict of Fascist and Democratic Ideals' by Melvin Rader in The Antioch Review, Vol. 3, No. 2, 1943, p. 246: I suspect it's an impossible argument. If Hitler had been efficient he wouldn't have forced the inventor of atomic power to join the other side.
** ** **
The TV has been showing the procession of hearses bearing the flag draped coffins of young British soldiers coming home to Brize Norton from Afghanistan. The country appears to be divided on whether or not we should be fighting this war in Afghanistan. I feel that Bush and Blair weakened our moral standing as well as time and lives with their ill-planned duplicitously justified invasion of Iraq, when we should have been putting all our energies into fighting a war in Afghanistan.
Anyone doubting the international connection might watch this video about the refugees camped in Patras or read the story in Kathimerini 14th July '09 by Pantelis Boukalas: In a book called Musaferat, or The Thousand and One Nights of a Refugee Camp. Patra-based lawyer and author Vassilis Ladas comments that:

a city needs to have its rubbish swept away, not fellow human beings...the camp in Patra in which our fellow humans reside is inhuman and its brutal "cleanup" cannot mask the huge responsibility that the government and local authorities shoulder to serve humanity and the basic responsibilities that are binding on them by virtue of European and international agreements....'

These passages from Ladas' book were featured in newspapers in Patra on January 31, 2008; signed by seven writers who live in the city who sensed the onset of events...
Posted by sibadd