Amy’s been on a cordon round the Bullring Shopping Centre, closed for two days by toxic fumes still to be identified. Just across Hamstead Road Welford Primary School was closed on Friday; a child with swine flu. We’ve been gardening; time now to be more like the irksome celebrities who work with everything to hand, fast-forwarding to show off their talent. 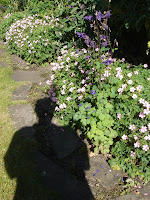 Yesterday, having skyped Corfu, I walked round the garden with my laptop to give Honey and Alan, in Agios Markos, a webcam tour. Honey couldn't stop laughing. Their picture of us was so distorted, they couldn't distinguish between the earthworms working our compost (grass cuttings, organic kitchen waste, twigs and leaves) from the flowers thriving in our borders.

Later I went down to Church Vale for milk, past the young men hanging out at the off licence, our local. I passed on news about the plots coming up on the Victoria Jubilee, and cycled on to Handsworth Park, through the Hamstead Road gate, past Cllr Palmer's fountain, west along the lake towards the railway bridge.
People enjoying Sunday in the sun, sat in families, groups of friends on the grass beneath the trees, playing games, chatting in pairs, strolling alone, the boathouse café open again and boats on the pond next week. Keith, in his Ranger van, stopped to chat.

“There’s too many people” he grinned.
"Any problems?"
"No. One fellow...had a little too much...wanted to swim in the lake."
"People are good. It's a lovely day." 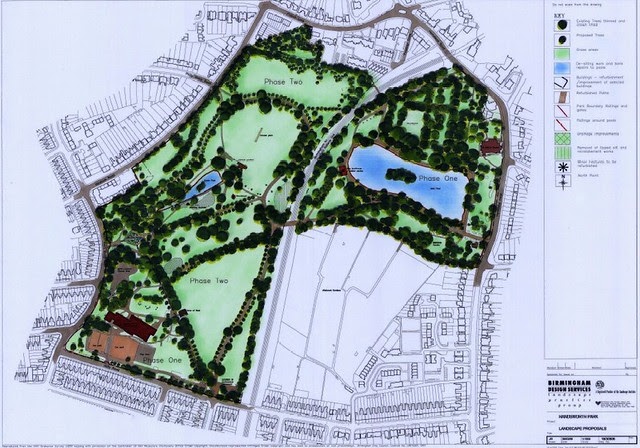 We both know how impossible this would have seemed just a few years ago, when our park, since restored to pleasant liveliness, felt unwelcome. Today the mall is cordoned, curbing consumption; our lovely park welcomes citizens of every age, every colour.

The challenge of a public park like Handsworth Park is that, as Lord Dartmouth, declared at its opening over a century ago - 30 March 1898 - is that it's "open to the people for ever." We have some sublime green spaces in Birmingham like the Winterbourne and the Botanic Gardens but they have an entry or subscription to cover their costs, rationing access. The idea of parks as a public good goes to the heart of urban economics. I use this question when giving talks about our park. "If you had a pound to give to education, housing, health or public parks how would you choose to spend it?" (make one pound a million or more if you like). Parks invariably come at the bottom of people's lists. This means that anyone arguing for the taxes needed to restore and maintain a place like Handsworth Park must constantly demonstrate its contribution to education, housing and health, and any other public good competing for resented taxes. I've long been refining this argument, as indeed have many many others, but it took a long time to bring public parks back from the blight they suffered from the 1970s on. What's so good is that there seems to be a global grasp of this, with similar recovery of parks in the America's, the Antipodes and many other places.

Coming home I called at several doors, walked up to people in the street to tell more people about the VJA in August “Pass it round”

Phone or e-mail Adrian Stagg on the Allotments Team 0121 303 3038 allotments@birmingham.gov.uk or go to the City Council website, search ‘allotments’; complete the application form to be short-listed for a plot on the 'Victoria Jubilee'.

Hot here in Corfy just now but still very green. Hope you are both well. Mark

* * *
Saturday evening, thanks to Lin, who doesn't watch much tele', we put on a programme to watch a tubby spinster in her late 40s "from a collection of villages" in West Lothian take four seconds to raise a lump in my throat [1.16-1.20 on YouTube]. Susan Boyle appeared on our screens in April when we were in Corfu where we have no TV or in-home WiFi. Amy told her mum to "have a look" at Britain's Got Talent. The YouTube clip - near 60 million hits in a month - depicts, within a screen minute, assumptions in judges and audience (including us, except by then we knew) based on age, appearance and aspiration ("...to be like Elaine Page!" cutaway to widespread smirks) this will be wannabe evisceration. Then she sings.
* * *
Ever since I came across his thoughts on intermediary Greeks, I've followed journalist, academic, photographer, Iason Athanasiades. Two pieces of his in The Washington Times, 25 May 09, comment on events in Athens.

1. Anarchy made a spectacular return to Greece this month as explosions struck banks and private businesses and a riot rocked downtown Athens...
2. Far-right-wing vigilantes burned a makeshift mosque in Athens over the weekend after Muslim immigrants in Athens attacked police with rocks and bottles...Although Greece has a history of political violence from radical leftists and anarchists, sectarian bloodletting represents an entirely modern phenomenon...