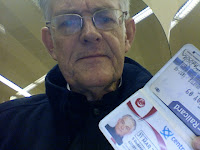 I've struggled to get into my head that as our governments have backed off regulation, UK rail fares have been increasingly subjected to 'sophisticated pricing strategies'. As I wipe egg flecks from my face this morning, a small satisfaction is that I have the flexibility - not being a bereaved relative needing to attend a funeral or travel across country to attend a sick parent - to ensure that team klugscheißer in charge of yield-management for CrossCountry Rail don't get their paws on my mulla, but at New Street at 0803 I had to send an e-mail to a friend's office in Winchester - thanks to WiFi in the station concourse:


Dear M. We're going to have to find some other way to meet up. I was vexed to find that X-Country are charging - even with my senior rail card - £69 return to Winchester; nearly £40 if I arrive after midday. The coach fare which I just checked is £26 but takes near 6 hours. I should have played the advance booking market months ago and probably got a better deal. I'm just learning to do this. It was I who sought this meeting so I'm especially sorry to be changing my plans so abruptly. Best, Simon

To quote from one of many bulletins I should have studied more - this one several years old:


HOW AIRLINE STYLE PRICING CAN BE APPLIED IN THE RAIL SECTOR. Changes in the regulation of rail fares open the way for train operating companies to further develop the kind of sophisticated pricing strategies used to maximise profitability in air transport. Success with such strategies depends on detailed analysis of customer preferences and demand patterns. This bulletin explores the economic principles that underpin 'airline-style pricing' and the ways in which they could be applied to passenger rail services in the UK.

Meantime a text message from my friend:


Simon. no problem. We can set up a meeting in May or June in London. Thanks. M

* * * How does a small island dispose of the rubbish we humans create? It's a most intractable problem. A group in Temploni are campaigning against the way waste is being dumped, untreated and uncompacted, on a permanent site at Temploni in Corfu. This is a podcast that attempts, respectfully, politely and responsibly, to counter claims that there's no problem here: One of Corfu's MPs, Ms. Angela Gerekou, (she's an architect - see also NISEA piece) supports Temploni residents' campaign and the Mayor of Corfu, Sotirios Micallef, has, according to this podcast, said he'll not order MAT against local protests at Temploni as has happened at Lefkimmi. This second video from AFTONMOSTV, producer of increasingly competent narrowcasts, shows a shrewdly arranged encounter with Danuta Hübner, an EU Commissioner who seems to have 'dropped in' to the island during an official visit to the regions of Ipeiros and Ionia Nisia between 25-28 February '09. * * * Many years ago my stepfather, in a provocative moment, remarked that watching football, as opposed to playing it, was "about the same league as glue-sniffing." Note at 1.09, on this YouTube clip about a disrupted 2nd division soccer match in Corfu between PAS Giannina (notorious for its fans 'fervour') and AO Kerkyra, the youth delivering the most insulting of Hellenic gestures (μούντζα) with the evident approval of a parent, and here's the wonderful Rena Vlachopoulo, from Ano Korakiana, delivering a swift double moutza to a driver in London for an Aegean Airlines commercial. When signalling 'thanks' or the number five, I try to remember to take care to hold my palm towards me to avoid being misunderstood.
* * *
Try Organoponicons! Cuba, forced by US blockade and the end of the Soviet Union, to abandon monocropping and pursue agricultural self-sufficiency is turning out to be a model for how, under - for the moment - less urgent conditions, we might change our ways of farming for food, especially in cities (BBCi Player programme about Cuban farming this Sunday afternoon - doesn't play outside UK tho'). See submission to Birmingham's Big City Plan (BIG) on urban agriculture
* * *
Teacherdude, my favourite citizen journalist, English but firmly embedded in Thessaloniki has been attending the Documentary Festival there and is again critical of mainstream media in Hellas, myopic about 'alternative forms of information and Democracy':


...Most blogs are less than two years old and thousands discovered them just months ago. On the other hand there were bloggers and other contributors who went out into the streets in December, talked to those taking part in the protests and disturbances at a time when most mainstream coverage consisted of long distance pictures and analysis by those who were even further from the scene. The media formed a closed system, almost entirely self-referential...In a sense they reminded me of Hitler and his high command locked away in their bunker...cut off from the madness flowing around them giving orders to armies that no longer existed. A fantasy of war and of command. Similarly, the media talked and analysed the riots and protests that swept Greece last December using fragments of evidence, endless discussions based on a single act or image but with no background, nobody thought to go out and ask the most obvious question...

I guess this is why though I wasn't in Greece I had a Greek student friend in Birmingham who was following events and I made contact with and stayed in touch with a number of people on the ground, conversed with them on the net, followed their blogs and studied their images, which was how I came across Teacherdude's close observations and first got my head round the concept of the citizen journalist, now exemplified in the AFTONMOSTV clips from Corfu. * * * 25 March 2009 in the capital 'People of Athens fight for green space':


ATHENS (AFP) — It is one of the most built up cities in Europe. Now fed-up residents of Athens -- enraged by the pro-development attitude of their politicians and emboldened by recent anti-government riots -- are taking matters into their own hands. Residents of the bohemian district of Exarcheia have scored a rare victory by turning a carpark into a small but much-needed park almost overnight.

The stories of environmental action in the Hellenic Republic are coming in fast nowadays. When I started this blog in 2007 Greek environmental politics was near invisible on the internet, with such sites as could be identified often moribund. No longer.
Posted by sibadd