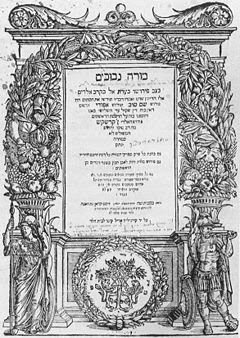 The Guide for the Perplexed (Hebrew:מורה נבוכים, translit. Moreh Nevuchim, Arabic: dalālat alḥā’irīn דלאל̈ה אלחאירין دلالة الحائرين) is one of the major works of Rabbi Moshe ben Maimon, better known as Maimonides or "the Rambam". It was written in the 12th Century.

The letter cost. I woke feeling loss, my conscience uneasy as in the aftermath of betrayal, then (how do these things happen to the faithless?) a small voice, one of utmost tact and gentleness, seemed to say "The things you love and respect and - yes - greatly need in Judaism aren't going away, you silly." Here I paused, unknotting grief and remorse. The voice became even sweeter, yet imperative. "You will never have to makes some hypocritical conditional caution about what you do and don't feel on that score. Jerusalem stands. Maimonides lives, as do his predecessors and a million successors to teach, to hint, to listen and guide your learning. These terrible things are done by men, not Jews. That was always true. You've always known it of your birth religion; assumed it in your growing understanding of Islam. You did not make a mistake in thinking too highly of the religion and philosophy that preceded them, but you made a category error that silenced you on matters about which you should strive to speak."
* * *
I hadn't heard about Standard and Poor's or Fitch Ratings until I read the news that Greece's credit rating - actually it's called Sovereign Credit Rating - had just been downgraded. I pulled this from Reuters dated 16 December 08:


The unrest, which has caused more than €200 million worth of damage, has fed on anger over political scandals, high youth unemployment and low wages, and the impact of a global recession on Greece. In bond markets, the spread between Greek debt and German benchmark bonds -- a measure of perceived investment risk -- reached its widest point in nearly a decade on Monday, at more than two per cent. Analysts said the political crisis had compounded concerns due to the global economic downturn. IMF managing director Dominique Strauss-Kahn warned there was a risk of social unrest spreading unless the global financial sector shared wealth more evenly. Copy-cat demonstrations have taken place in many European countries...Greek Prime Minister Costas Karamanlis's ruling New Democracy party has denounced the riots as the work of a small group of hardcore anarchists, but at their peak early last week thousands of youths ran riot through 10 cities, wrecking hundreds of cars, banks and businesses, spooking investors. "Even if you don't believe that Greece could end up exiting the euro, you will not want to take on risk," said Peter Mueller, interest rate strategist at Comerzbank in Frankfurt. Chris Pryce, sovereign analyst for Greece at Fitch Ratings, played down the political risk to the government. He told Reuters Television he had no plans to alter Greece's A rating. "It will stay stable I would have thought: single A -- the lowest in the euro zone -- for some time to come," he said.

I don't talk this language. I may glance at it. I don't study it. On January 13 the Financial Times Tony Barber wrote of Europe 'weighing the risks of debt against the misery of recession':


Credit ratings agencies are in the doghouse in Brussels, both for their supposed role in making the financial market crisis worse than it need have been, and for their alleged failure thereafter to put their houses quickly enough in order. But that isn’t deterring the agencies from taking a hard look at the way Europe’s recession is straining the public finances of certain governments in and out of the euro area. Last week, Standard & Poor’s, one of the world’s three main agencies, warned that it might cut the sovereign debt ratings of Greece and Ireland.

Then on 14 January 2009 Agence-France Presse reported: 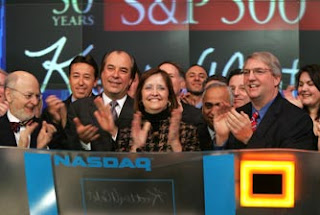 Standard & Poor's cut its credit rating on Greece's sovereign debt on Wednesday due to a rising public deficit and deteriorating economic outlook, stoking fears of downgrades to euro zone states as the global crisis bites. The news sent Greek bond (SB memo: scandal about these in May 2007 involving North Asset Management, Hypo Vereinsbank, Akropolis and JPMorgan reported to the FSA by the Greek civil service union ADEDY) spreads sharply wider and helped drive the euro to below $1.31 versus the dollar, amid concern S&P downgrades to euro zone economies like Spain could follow. S&P cut Greece's sovereign rating, already the lowest in the 16-nation euro zone, to A-/A-2 with a stable outlook from A-/A-1, citing the government's repeated failure to pare back its fiscal deficit despite years of solid economic growth.


And Margaret Pagano in Sunday's Independent:


If (Euro) notes carry the Y, or S for Italy, or V for Spain – (German) savers are asking for them to be exchanged for X-rated euros printed by the Bundesdruckerei in Berlin. Under European Central Bank (ECB) rules, each country prints its own notes based on its economic credit worthiness and weight. So theoretically, all the notes printed – whether by the Bundesdruckerei or the Istituto Poligrafico e Zecca dello Stato in Rome – are equal and interchangeable. So are the Germans being driven by a bout of Teutonic angst over the future of the Teuro – as they call their notes – or a much deeper fear that the eurozone is in danger of cracking up under the pressure of this recession? Greece looks, at the moment, like the one most likely to make the split. Its current account deficit is above the 14% of GDP set by the ECB while its public debt will rise to more than 100% of GDP by 2011 without big spending cuts. So Greece has three options: it quits the euro and devalues; assets prices deflate hugely to reflect the higher cost of capital or there is an EU bailout. With Greece's pivotal geo-political role in the region vis-à-vis Cyprus and Turkey, it's unlikely it would be allowed to exit the euro. This leaves some sort of combination of a bail-out by Y of the richer countries – X and U (France) – plus a tough few years of deflation.

These events help explain why the concrete caissons that were supposed to be sunk in the sea to form the jetties of a new marina in Corfu's old port have been left blighting a panoramic view towards Pantokrator, Vido island and the great mainland mountains of Epirus and Albania. John's Corfu World blog shows pictures and after I made enquiries I learned that the contractors, owed a great deal of money by government, have stopped work and left the caissons in the most prominent place.