"Have you visited other places in Greece?" 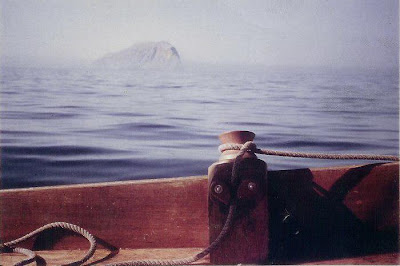 Danica becalmed near Antikithera on her voyage back to England in 1962
From a fleeting acquaintance on Facebook - an e-mail:


Kerkyra is like London (!) rain all the time (August- June) never snow. But is sooo beautiful, reminds me of Venice. Have you visited any other places in Greece?

I first saw Greece as I crossed the border near Thessaloniki on a train from Venice in 1957. A noisy wedding party woke me at Larissa, around one in the morning. Grumpy, I asked them to let me sleep and they asked me to cheer up. That's the English-Greek thing! At my Greek yiayia's flat in Koloniki I went to the loo and glimpsed the Parthenon for the first time through its small window. I walked with the crowds with my candle at Easter and marked a cross on the lintle of the door of my step-aunt's flat with its flame. I sailed from England to Greece in 1962, passing between Zakinthos and Kefalonia, through the Gulf of Patras to the Aegean via the Corinth Canal. I've rounded the three southern capes Maleas, Matapan and Akritas, gazed south from Cape Sounion, driven over the Taigetus and the other great ranges of the Peloponnese from Athens to Methoni with my family and been alone at Delphi (centre of the world) - such silence I could hear the blood running in my ears. My ancestor, Henry Maine, wrote long ago in an essay on Popular Government (1885) 'Except the blind forces of Nature, nothing moves in this world which is not Greek in its origin.' This is your burden in modern Greece - to be the source of Western civilisation. Such expectations! The irony, as reading Thucydides shows, is that Greece's perfections and flaws are in the Western grain. Do you understand this possessive love of Greece in foreigners - especially the English - far deeper than sunny beaches and giros, rooted in the blind attachments of educated passion? 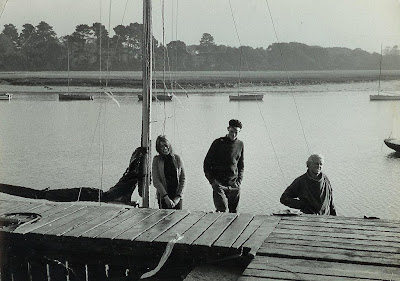 Elizabeth Jameson, me and her brother Chris (skipper) at Lymington after Danica's voyage from Athens ~ Oct 1962
George Seferis who said of the blighting of democracy on 28 March 1969 "This anomaly must end. Now I return to my silence and I hope there will be no need to speak again" wrote far far more than I ever could. From the ship Aulis in 1936:

On Pelion among the chestnut trees the Centaur's shirt slipped through the leaves to fold around my body as I climbed the slope and the sea came after me climbing too like mercury in a thermometer till we found the mountain waters. On Santorini touching islands that were sinking hearing a pipe play somewhere on the pumice-stone my hand was nailed to the gunwale by an arrow shot suddenly from the confines of a vanished youth. At Mycenae I raised the great stones and the treasures of the house of Atreus and slept with them at the hotel `Belle Helene de Menelas'; they disappeared only at dawn when Cassandra crowed, a cock hanging from her black throat. On Spetses, Poros and Mykonos the barcaroles sickened me. What do they want, all those who believe they're in Athens or Piraeus? Someone comes from Salamis and asks someone else whether he `issues forth from Omonia Square'. `No I issue forth from Syntagma,' replies the other, pleased; `I met Yianni and he treated me to an ice cream.' In the meantime Greece is travelling and we don't know anything, we don't know we're all sailors out of work, we don't know how bitter the port becomes when all the ships have gone; we mock those who do know. Strange people! They say they're in Attica but they're really nowhere; they buy sugared almonds to get married they carry hair tonic, have their photographs taken the man I saw today sitting against a background of pigeons and flowers let the hands of the old photographer smooth away the wrinkles left on his face by all the birds in the sky. Meanwhile Greece goes on travelling, always travelling and if we see `the Aegean flower with corpses' it will be with those who tried to catch the big ship by swimming after it those who got tired of waiting for the ships that cannot move the ELSI, the SAMOTHRAKI, the AMVRAKIKOS. The ships hoot now that dusk falls on Piraeus, hoot and hoot, but no capstan moves, no chain gleams wet in the vanishing light, the captain stands like a stone in white and gold. 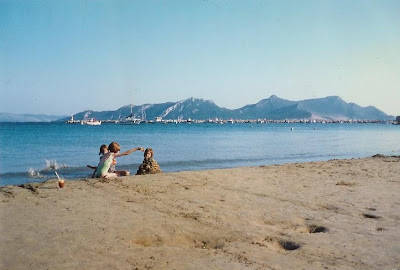 Amy and her cousins Anna and Natasha ~ August 1996

Wherever I travel Greece wounds me,
Opou kai na pao i Ellada me pligoni
curtains of mountains, archipelagos, naked granite. They call the one ship that sails AG ONIA 937.

I envy you that you can read this in Greek. I have the sea. 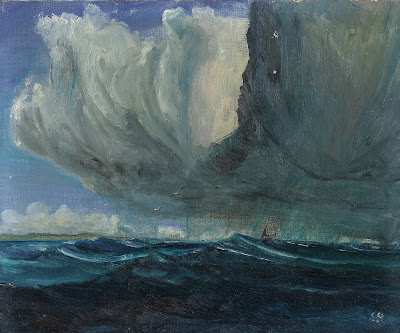 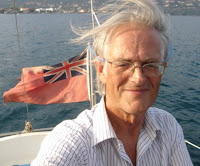 Summer Song off Corfu ~ Sept 2008
* * * *
It's chilly on the road but not icy and I can get in and out of town faster by bicycle than bus. I do love cycling and it does - now and then - give me little bursts of energising optimism amid the doleful smell of burning fuel. At my really useful one-to-one at Apple today, with Karl helped by Ash, I was shown how to solve a problem of down-loading a mélange of film files in my archive of political-management conversations. "Convert them with Streamclip into DV. It's the best for editing." We tried it with a fractious file which, even if it would download, had been losing its soundtrack on being converted from MPG into AVI or MOV. As a DV file it loaded with sound into iMovie for editing. "Hurray! Now how do I download stuff from my VHS tapes?". "Try a DVC? We've got it in stock" This was a digital video converter. I bought one to mine the hours of film I made in VHS.
* * * *
I got an e-mail from Kim saying that showing these videos on 'Democracy Street' needs more interpretation. 'Information is not knowledge':


Dear K. I really need your thinking on this. I've ploughed an isolated furrow with the films I make with the help of many practitioners for which I'm immeasurably grateful. I've been trying to make it easier for those interested (and some who start off uninterested in what they expect will be a dry subject) to learn from the films - hence the extracts plus limited interpretation and transcripts on my blog and thence to the web - a pilot in making the material more accessible. You suggest the clips need more interpretation. 'Information is not knowledge'. I have a dilemma. I prefer to avoid interpreting. I know for some this may be frustrating, but the idea is to encourage observation by showing people things they might not otherwise have a chance to see. I provide the means of watching practitioners at work and learning from that, with others. I do explain the difference between political and managerial processes; about the resultant role tensions between politicians and administrators; and the idea of overlapping zones - political, managerial and professional; about the way individuals through their integrity - their personality - can resist the centrifugal forces that can result from tensions between different ways of understanding direction and purpose in government. It's as thought I might describe the nature of sibling rivalry, or the tension between mothers and daughters-in-law where social convention in a patriarchy means they live under the same roof after a man (son and spouse) has married. I point the camera and replay the films, encouraging people to think, and share their thinking, about what they're seeing and hearing - helped by comparison, playback, stop frame and selection, with and without sound - among clips of successive conversations. The explanatory notes are here (pause the film to read the longer slides). Do you think I should put five or six lines of extra explanation beside each clip? I feel a bit like the curator at an exhibition of abstract art. I want people to look at the paintings, but I know from my own experience that a label - even if it doesn't explain - can be somehow reassuring - a way of having one's thoughts guided from words and explanation to images and the possibility of understanding. Best, Simon