I was at St Silas' Church in Lozell's Road for our ward committee meeting last night. I raised the matter of the Victoria Jubilee Allotments S106A. 'We all know what this is about. So when?" The best I could get was an assurance that the Constituency Planning Officer would report to the next meeting on 21 January. I'm thinking. This evening, after I'd sent an e-mail to Kay Alexander about 'the flytipping menace', Ashley Blake of Midlands Today came round to do a one minute live slot (on YouTube) about the photos I've attracted to Flickr. On the OB camera was Ellen who remembered me from editing the film Nick Booth conceived and directed in 2000 on The Victoria Jubilee Allotments - Losing the Plot. She was interested in the waiting land. Adrian Goldberg has done a piece in The Stirrer and promises to stay on the case. Cllr Kim Brom (link no longer active) said after the meeting she'd press Alan Orr for news about the S106A over the next few days. Note: Alan Orr's letter of 30 April '08 :


The Agreement relates to the Heads of Terms as approved by the Development Control Committee on 13th May 2004 re application: N/01514/03/FUL . The main Heads were:
a). Provision of 80 allotments on site and their transfer to the City Council. b). Provision of a tertiary (toddlers) play area and associated open space (on site), and the payment of £25,000 in lieu of the provision of a secondary ( for older children) play area. c). A financial contribution of £150,800 towards open space improvements off-site. d). The provision of two playing pitches and a cricket square, a pavilion changing room facility and car parking, and their transfer to the City Council. e). The provision of 24 affordable housing units on site. The S106 Agreement was completed on 23rd August, 2004, executing the above Heads of Terms. To date, no changes to the Agreement have been made. In respect of its implementation, in terms of the affordable housing units, to my knowledge these have been provided. Indeed, I understand that as the developer (initially Westbury Homes, and now Charles Church) entered into a partnership with more than one Registered Social Landlord, the provision of affordable housing on the site is in excess of that required under the S106 Agreement which will have been to the benefit of meeting local need for such housing. In respect of the other provisions of the Agreement, as is the common practice their delivery is related to a number of 'triggers' depending on the stage of the overall development or the housing element of the development. Thus, the provision of the allotments and the sports pitches is related to the occupation of 40 open market dwellings on the new housing development (the 40 dwellings does not include the 24 affordable housing units). Currently, the sports pitches have been laid out but their transfer to the City awaits the completion of the changing room pavilion and associated car park.

* * * * Had my third lesson at Apple in the Bullring this morning with a different Ash. This time I was introduced to MPEG Streamclip, free software to convert a variety of video files and learn about the H264 codec. My grasp with these ways of making films is steadily increasing. We even discussed the idea of a website with text and streamed videos to help explore dynamic at the political-management interface. I haven't got a graphics chip on my MacBook so I need to do film processing - except for tiny clips on the big computer at home. * * * * 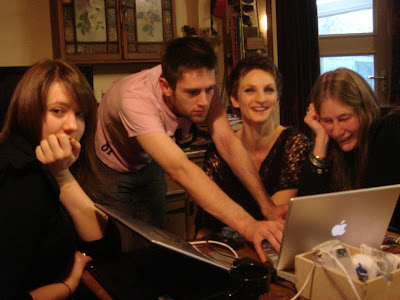 Karen Van Hoff and her daughters came for the weekend and we talked, looked over Richard's website (see also) for her, played karaoke via the laptop, sang along with Leonard Cohen, especially Democracy, over and over went in and out of town and laughed a lot and got the good news that my brother George's first pub stand-up routine in London had gone really well and he'll send me a film of the evening. 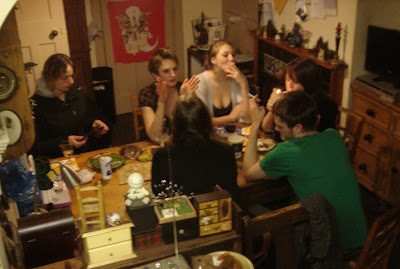 We rechecked it with the Pensions Service - phone answered quickly and explanations given clearly. Yes, that advice is incorrect. Sighs of relief, but Lin took the extra trouble of phoning Saga. They too were good on phone answering and I thought the flowers, a few days later, a really nice gesture for Lin taking the trouble to suggest others might be confused - especially as Lewis is so good on money advice - self described as a capitalist-socialist. * * * * Watching the 44th creating his government is just fascinating - for an academic to watch the process of government formation in a democracy; for any citizens anywhere, including me, to learn what follows the vote, especially with this US transition phenomenon of two months between election and inauguration. Who will be Obama's Treasury Secretary? Who determines the terms of any GM bail-out - the incumbent or the elect? Has it ever been possible for so many outside the Beltway to watch this process in a time so freighted with portents and omens. * * * * The news from north Corfu involving famous names is eclipsing a more significant and dramatic sequence of events further south in Corfu's village of Lefkimi - a series of escalating confrontations between riot police and villagers protesting against a large landfill site of dubious legality. Today's Kathimerini reports a repeat - yesterday morning - of protests at Lefkimi against the landfill being built there. Police and locals fought earlier in the year; in January, May (see also) and June. This week a police car was burned and village protestors injured in dawn encounters with the police. There were barricades, fireworks and stones and over forty arrested. News is sporadic. This is Brabant for the BBC in October 08. This is an angry Brit in June 08 on a Greek blog continuing to the present and this is from Earth First - an international environmental group supporting direct actions. 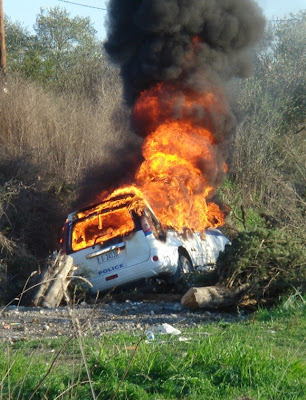 In Prosecutor, led the noon march in which 46 people were arrested in yesterday's incidents in Lefkimmi. Among the categories are facing serious injury when police, insulting and threatening a continuation. Trial date was set for Monday but is expected to set new trial date because of the planned mobilization of lawyers and occupy the courts. The incidents yesterday in Lefkimmi resulted in burning of a patrol car, and rolled, but many arrest and outbursts are the result of tension once again created yesterday outside the site of the landfill. About 150 residents of the area react to the creation of the landfill, by decision of the Steering Committee set up yesterday morning proceeded to capture the road leading to the creation of installation. The tension culminated on 3 after noon when, during the shift change of SWAT men to supervise the area since early last summer, created incidents which culminated when some of pooled burned down the police jeep. A few minutes later, the arrested 46 were brought in. Safety for participating in the episodes, episodes from the slightly injured one of the demonstrators, who moved to the Center for Health Lefkimi to him first aid. The seizure of the road ended late last night.

* * * At Frederick Adam's beautifully restored neo-classical house at Kanoni (the one with the silly name 'Mon Repos') there's an exhibition of old black and white photos of Corfu by John Davenport Shakespear, an army officer, living with his family before its union with Greece in 1862. Wounded in the Crimean War, he returned to England, married Louisa Caroline Sayer, They moved to Corfu where their daughter was born and met Edward Lear, from whom Shakespear bought the photographic equipment he used to make this permanent exhibition.
Posted by sibadd