Starting to learn the map of Eastern Europe 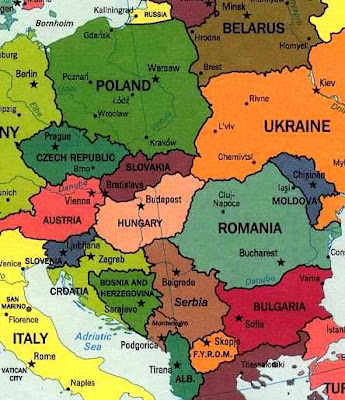 The map in my head of Eastern Europe is vague. A large area east of old West Germany and Italy which now includes parts of what was once the Soviet Union and, of course, the Balkans through which we will make our next journey to Corfu in January 09. Cities - Vilnius, Minsk, Leipzig, Dresden, Warsaw, Krakow, Graz, Budapest, Belgrade, Bucharest, Zagreb, Sarajevo - resound in significance, but their location in relation to each other eludes me, like those towns in western Europe to which American's affix the country; 'London-England', 'Paris-France'.


[16/10/08 Back to the future: Eastern Europe's experience of recession] [15/11/08 Balkanology: Architecture & urban phenomena in SE Europe: 'Since the collapse of the socialist economic system in ex-Yugoslavia and Albania and the war that lead to the split of Yugoslavia, a new form of urbanisation typified by extensive informal building activity has appeared on the territory. Taking advantage of sketchy legal frameworks and governments initially too weak to enforce rules and regulations, inhabitants have taken the issue of housing shortage in their own hands, they started building new dwellings from scratch and adapting existing edifice for their own purposes.']

As we waited in the ferry terminal at Igoumenitsa on Tuesday evening I looked at maps. Here was one of Epirus - the mainland province of Greece we see from Ano Korakiana. To my delight a rail route diverts from the mainline between Thessaloniki and Athens to Makrynitsa, then west to Kardetsa before turning north to Kalambaka from where, after visiting the monasteries at Meteora, we can take a bus via Trykala to the coast at Igoumenitsa. On the ferry to Ancona there was a wall map of Europe. I checked distances between Athens and other eastern capitals - beginning to make sense of the line Warsaw-Poland, Prague-Czech Republic, Bratislava-Slovakia, Budapest-Hungary, Bucharest-Rumania, Ljubljana-Slovenia, Zagreb-Croatia, Sarajevo in Bosnia-Herzegovina, Belgrade in Serbia, Tirana in Albania, Skopje in FYROM, The Republic of Macedonia - the country with the contested name that borders the Greek province of Macedonia [25/11/08 e.g. Μακεδονία] - then Sofia in Bulgaria. 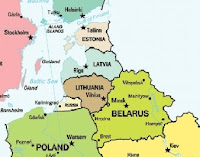 Then east of this line, running north-south from the Baltic are the smaller countries of Estonia (Talin), Latvia (Riga) and Lithuania (Vilnius), with the exclave of Russia (Kalingrad), whose existence was unknown to me, squeezed between Lithuania and Poland, followed southwards by Belarus (Minsk), Ukraine (Kiev) on the Black Sea and another small landlocked state squeezed between Rumania and Ukraine - Moldova (Chişinău), and marching on Moldova's eastern border with Ukraine, the frozen conflict zone of Transnistria (Tiraspol). I'd not heard about this place until today and the ominous phrase 'frozen conflict' wasn't in my lexicon. It's an obvious offspring of 'cold war'. Where 'thaw' implied conciliation, here it means conflict breaking out. We'd had the idea of flying to one of the cities of Poland or a country further south, then going on via rail and bus to Greece. Back in Birmingham we studied the cheapest flights to Eastern Europe with rail connections southward and came up with Sofia, from where trains go to Thessaloniki south to Athens. I began when looking for these to find out the unreliability of the web, so convenient for arranging rail travel in Western Europe. Linda booked us two return air fares from Luton to Sophia by Wizz Air Hungary - one we hope survives until next year. Our flight gets in around 0050 and the first bus into town and the mainrail station - number 84 - runs at 0500 [information at Sofia Airport site in English]. We'll need to bivvy down until the first bus to town. That was straightforward but it took a while to find the Sophia-Thessaloniki timetable via a link on Bulgarian Railways' website. From Thessaloniki we catch one of two daily Athens trains south via Larissa, ours leaving at 0700. OSE Hellenic Railways website was unhelpful, so I'm unsure when we get to Larissa.

For Larissa to Kalambaka, I found, from another site that athough there is a rail route, the bus is probably simpler for this part of our journey to Corfu:


Larissa to Kalambaka: The bus will take you to Trikkala in one hour, price: €4, first at 0630, they run almost hourly until 1930. Then it is 30-min and €1.8 to Kalambaka; buses leave every 30-min. (ask at info booth in Larissa for direct bus to Kalambaka...there are some...then you do not have to change at Trikkala). Buses leave the main station in Larissa, 150 mtrs north of Pl.Laou at Olympou & Georgiadou.

We will find a place to stay at Kalambaka so we can visit Meteora before going on to Igoumenitsa. The same site helped us on this:


Kalampaka to Igoumenitsa ... There are 2 buses you can take: 0850 and 1520 from Kalambaka to Ioannina (3 hrs) €10.50. If you take the 1520] to Ioannina you should still be in time to catch the 2000 bus to Igoumenitsa. Believe the cost is about €8 additional. 2hr trip. If you are looking to leave Igoumenitsa for Corfu the night you arrive... you better hurry, the last ferry of the night leaves for Corfu around 2200 ... It will likely wait for late arrivals off that last bus, but it won't wait too long and it won't wait IF it is filled. Hopefully you will be taking the morning bus out of Kalambaka and not worry about it. Good luck. Calh taxidi. Denny

It disappointed me is that the celebrated Man in Seat 61 hyperlinks to Greece and Bulgaria, though directing me to these country's rail services, said nothing about the inadequacy of their websites. A helpful man at the Greek National Tourist Office in London apologised for the OSE website while assuring me of my itinerary to Corfu this way. The Rail Europe office who have been helpful in the past could not help with rail travel in Eastern Europe, nor could International Rail to whom Rail Europe referred me. * * * An e-mail to All Experts:


Dear Denny. Your other answers on getting to Kalambaka and on to Igoumenitsa have been very helpful, but the OSE website is not so helpful. Can you tell me when the early afternoon train from Thessaloniki arrives in Larissa, for us to connect with a bus to Kalambaka on 21 Jan 09? Also when does it stop, morning and afternoon, in Larissa on the way back to Thessaloniki? Best wishes, Simon & Linda


Yiasou Simon, thanks for the question. I am not quite sure why you want to do that ... Why not just take the bus from Thessaloniki to Trikala (3hrs. 6 per day. 0800-2100 daily. €15), then take the bus to Kalambaka from Trikala. Every 40 min. 30 min ride. Under €2. Taking the train from Thessaloniki into Larisa to catch the connecting bus to Trikala/Kalambaka will require you get to Thessaloniki train station by 1000 to catch the 1030 to Larisa. It is a 2-hour train ride (€5). Gets you into the Larisa station at the 5-way intersection on Panagoula about 1230 in the afternoon. Then from the 5-way intersection, walk about 600m to the gas station bus stop on the left, still on Panagoula. The 1-hour trip by bus to Trikala makes at least 3 runs between 1300 and 1930. Price €4. (So you will save money this way, as about €11 is the cost of the train/bus combination vs. about €17 going bus all the way from Thessalonika. So it will be cheaper but not as convenient. good luck Simon. Calh taxiedi Denny

* * * I enjoyed the opportunity on flickr to describe why I own five Brompton folding bicycles. 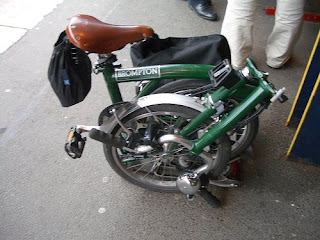 * * *
I was scanning the excellent blog - An American in Athens. Engaged to a Greek citizen (I think) Kat quotes national comments, and telling stats, on corruption in Hellas, quoting Transparency International's Corruption Perceptions Index (CPI). Greece scores - ever so slightly - better on corruption measures than some of the enlargement EU countries of Eastern Europe. In my old age I should be in a better position to be widely understanding of human weaknesses, but how I detest public corruption, especially as practised among the prosperous, wont to whinge priggishly about danger in the streets and squares of the world while gutting the commons; snatching from the public purse; sharing smug self-justification to excuse their criminality - and 'oh so sorry' - shrewdly commodified repentance - on the few occasions they do get their just desserts. 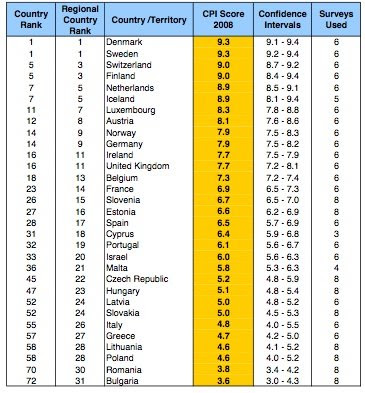 Phone chat with my mother in Scotland. She told me that at the start of September four friends of one of her best friends, related to each other, went walking in the woods. They collected and ate some cortinarius speciosissimus, (two pictures on the right) possibly mistaking the fungi for chanterelles (two pix on the left) which are delicious. I pick them when I'm in Strathnairn.

chanterelles. Fungi are seldom like the neat pictures in guide books. I suppose CS could be mistaken for chanterelles. Trouble is, where the false chanterelle is merely tasteless and tough, CS can be fatal or make you very ill.