I've just had another go at drawing attention to dangers on Edgbaston Park Road - a busy route into Birmingham University campus for students living at the Vale about half a mile away, and indeed one of my ways into work once I've left the Birmingham-Worcester canal towpath at its exit by the bridge on Somerset Road. I made this film in October 2004. I passed the DVD out to various people who I thought might be able to do something about what looks like an accident waiting to happen - and therefore not an accident. This morning, on impulse, I posted it on YouTube and sent it to some friends and people who might bring pressure to bear to arrive at a more satisfactory arrangement - for instance an attractive and safe walkway between the Vale and main campus just over half a mile away. Plenty of people know and agree this road is hazardous, but because Edgbaston Park Road is a major route for motorised traffic onto campus including the Queen Elizabeth Hospital and surrounding offices and a feeder to the Bristol Road which takes traffic into and out of Birmingham, it's difficult to introduce significant traffic calming. For the time being the investment needed to lay out an alternative walking route is not forthcoming. There have, as far as I know, been no deaths on the road. My student was injured near where the figure stands at the end of the film. That was over twenty years ago. He walked too far from the side of the road that has no pavement and was hit by a car, suffering a compound fracture of his arm, from which, thank goodness, he made a good recovery. I show this film to new students. It's hardly 3 minutes and makes its point cogently. I was delighted that the red Royal Mail van weaves in and out of sight on the film establishing that I was filming in real time and not selectively. How I delight in Blondie's line "...walking on imported air"! Thanks for being allowed to use this song to back the film.
* * *
Meanwhile, more fires on the outskirts of Athens. 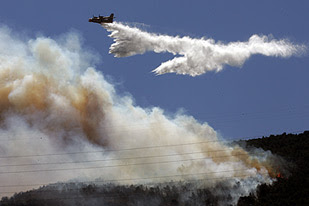