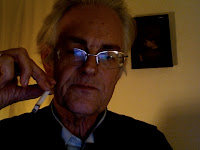 In cities, where more and more of us live, plots are elusive. Moments that might, in a village, have started a story, get washed away in the urban flux. “We ran to an incident yesterday” said Amy on the phone from Birmingham. “And?” I said “It was two gangs fighting. They’d run off by the time we got there – me, a car and a police cyclist.” “Go on” “Well there was this was dopey girl who said she’d only give us a statement if we let her ride a police bicycle”. “And?” “Oh, I had to check on that man you know in town who plays the saxophone. He lost his accommodation. He’s been sectioned a few times.” “Andre? And what happened?” “I just had to check on him.” “And?” “Nothing really. We see him around but he doesn’t listen to us. Just talks about other things.” 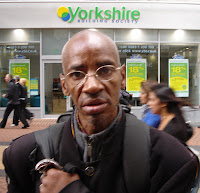 Coronation Street and Eastenders, represent Britain as a horio, creating narratives that seem, ingeniously, to simulate the shared concerns of a teeming transient over-populated terrain of 60 million people. Their scripts are written by metropolitan talents mining ore from the glop of contemporary confusion and fashioning it into soap. On Corfu the ore lies closer to the ground.

We were in J’s place on Saturday night with a cast of most of those we'd got to know from arriving here in September 2006. Lin was getting a laugh from my latest mishap. I’d tried to enter the local supermarket via its automatic doors and walked into the glass. I told how last December I was cycling down the long hill from Spartillas and I'd been bitten – well, nipped - by a dog. “I know that one!" said D “Big black and white mix. Has a go at everyone passing.” “And I thought it was only me” I complained. In walked X, the man who’d not done a very good job on our roof last year; the reason I’m bagging his discarded mortar and broken tiles as our roof is redone. He greeted us cheerfully. I smiled and shook hands. Later I muttered to D “it galled me to do that” “Why?” “Because I looked as glad as when I greet you”.
This was a moment amid the conviviality for D to tell me some things. I was telling him about the filioque clause. Knowing D's aversion to any talk of religion I said “You won’t be interested in this. Did you know that the Latin and Orthodox Christian Churches have been split for over 1300 years over whether the son – Jesus – is ‘of’ or ‘from’ the Holy Ghost?" I couldn’t even get that right but he took my point.
“This is a small island. People know what happens. You’ve got someone else to do your roof. You told me that. I can handle that. I’m … (what was the word he used?) … I’m broad shouldered (it was better than that)… but (he mentioned Y who’d also been on our roof) thought we had an agreement with you, which we did and now you’ve got someone else. He’s not well pleased, in fact if you were younger, he’d have done what that door did and more.’ I could not speak. ‘You're surprised at two churches splitting straws for a thousand years. Things like that start with a word - one gesture, one action in a small world. Take your decision about your roof. It’s not a problem for me, but for Y it’s different. Now if you’d refused to shake X’s hand that could have caused the same problem.’ I kept silent, chastened. Our exchange was over swiftly, but its import wasn't diluted by another hour of friendly conversation. It ached as I went to my warm bed and was reading Kevin Andrews on the Greek Civil War while Lin went on varnishing our stairs.

'When the wood faileth, the fire shall go out: and when the talebearer is taken away, contentions shall cease. As coals are to burning coals, and wood to fire, so an angry man stirreth up strife.' Proverbs 26:20-21

'Even so the tongue is a little member, and boasteth great things. Behold, how great a matter a little fire kindleth!' James 3:5-6

* * *
Kevin Andrews' conversation with a Cretan gendarme in Molái, in the Peloponnese, in a coffee-shop full of war weary men:

‘What solution is there?' he's asked towards the end of an evening 'What way do you propose for us?"
He replies ‘There’s only one way for a civil war to be won.’
‘What way?’
‘The hardest of all.’
‘What way?’
‘Moderation.’
He (the gendarme) nearly screamed. ‘Can you speak such a word – and to us!’
‘I said it’s the hardest of all.’
‘Do you say that for comfort? Is that another one of your labels?’
Then he calmed down rather suddenly and said, “In this age there’s only one thing for men of moderation to do, and a lot of them have done it already.’
‘The only thing they can possibly do,’ I said, ‘which is to work at –’
‘No, no. Not work at anything. Just kill themselves.’
The Flight of Ikaros Ch.4 p.78 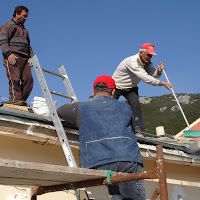 On Sunday afternoon Lambros and his mates finished the roof. On Monday we got the money from the bank in town. Aln was up again with H in the afternoon to collect this, start work on our upstairs electrics and prepare for the installation of our wood stove. But they arrived to a stench. I’d put my overcoat on the back of a chair in our dining room and turned on the laptop to hear music. In doing that I’d overlooked the halogen heater on the same extension cord. While chatting to Lin in the garden I got a whiff of burning. My coat made of some synthetic fabric was smouldering. ‘Shit” With smelly smoke spreading through the house I dragged it outside and doused it. Ruined. “You idiot!” said Lin. 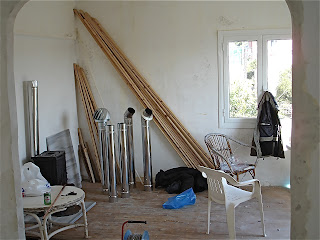 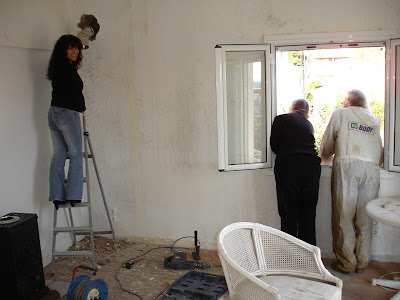 Upstairs we started offering up the pipe to the stove. The installation was complicated by the roof overhang, the exact positioning of a supporting bracket, the angle of the flue-pipe, a piece of metal reinforcement embedded at just the wrong place in our wall...
Posted by sibadd