On the basis of the e-mail received this afternoon it's pretty clear I should be off to The National Archives at Kew:

Thank you for your email - I finally did get it, although I am no longer at the British School at Athens. It is indeed a very interesting quest you are on, with that petition!
For some background, I think it is fair to say that opposition to the union of the Ionians to Greece as it was proposed in the 1860s and eventually carried out, came from the two ends of the political spectrum. On the one side was the old guard of the Radicals, who were against it on the grounds that, by ceding the islands as a gift, Britain retained and indeed expanded her influence over Greece (rather than being forced to abandon them on the basis of national self-determination, which was what the Radicals were clamouring for). On the other side were the genuine supporters of the Protectorate, and they tended to be concentrated in Corfu because, as the capital, it had benefited more than the other islands. Most of these pro-protectionists were concerned that, with the demise of the political status quo, their own privileged positions would be threatened. In an effort to influence the issue of the future of the islands (which was debated and very much in the air since Gladstone's 1858 mission, and even more so during Henry Stork's tenure as High Commissioner) a number of petitions were addressed to the British throne (my italics SB) (it being a constitutional right of the Ionians to petition their protecting sovereign) asking that the Protection be retained.
I do not know particular details but a good source for the period is the History of the Ionians by Chiotes (only, I'm afraid, in elegant but rather old fashioned Greek) - he was a witness to the events and narrates the very upsetting last episode of the blowing up of the Venetian fortifications by the departing British, which was bitterly resented by the Corfiots.
Now, regarding the particular document you are looking for, I would suggest that the best place to look is the High Commissioner's Correspondence at the Colonial Office archive of the Protection, housed in the Public Record Office, now re-named National Archives but still held at the Kew. I would look at the last couple of years, from 1862 onwards - probably starting from CO136/177 to /184. If such a petition does exist and is signed by inhabitants of the village, it would be interesting to identify the local figure of importance, as the initiative probably emanated from there.
I hope this is of some use and not off-putting in its detail - I do get a bit carried away as I am still very interested in the subject. It was a pleasure to see the website you mentioned which is very well constructed and informative - it shows great 'meraki'! I have not yet looked at your blog because I have an antiquated internet connection which does not lend itself to surfing - but hope to be able to update soon. Since part of your family is Greek and you live here occasionally, you will be familiar with the vagaries of OTE!
Please let me know how the quest progresses and if I can be of any help in the future.
With my best wishes for the new year, E**** C******* 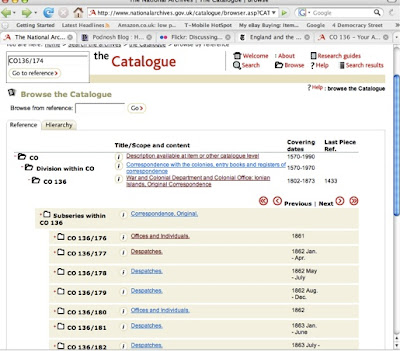 'His petitioners still long for "the purple seas"' 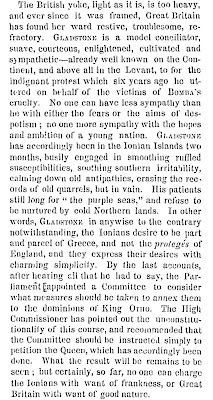 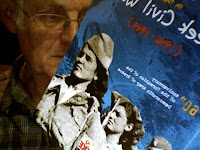 I enquired over the internet about a leaflet published by the Communist Party of Greece. Back from their Central Committee's address in Athens, in just three days, in an envelope with postage stamps bearing the words ΕΛΛΗΝΙΚΗ ΔΗΜΟΚΡΑΤΙΑ beside rich colours like the ones Dad used in 1949, when he wrote to me at school, has come 'Notes on the Greek Civil War (1946-1949) 60th Anniversary of the formation of the Democratic Army of Greece', with the logo of a red hammer and sickle and a greeting card with a striking painting by Maria Pesmatzoglou 'Best wishes for the new year. 90 years since the foundation of KKE. Central Committee, Communist Party of Greece.' [On this see my friend Lindsay's opinion of 'liberal history']
Posted by sibadd