A year ago next month 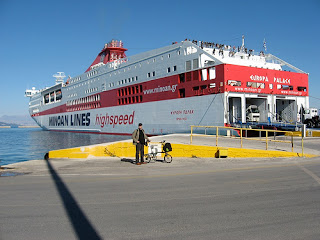 This time last year we were getting ready to finish buying our house in Ano Korakiana. Linda, who'd organised cash via a funds transfer company (phone and internet), gave me Power of Attorney through a Handsworth Solicitor (face-to-face). The legal form needed an apostille stamp at the Foreign and Commonwealth Office, near Admiralty Arch, to make it lawful in Greece (wait at a counter). I met my friend, John Richfield, at Waterloo. Planned with the help of The Man in Seat 61, we took Eurostar to Paris, Trenitalia overnight to Venice and Minoan Lines ferry to Corfu - my preferred way of arriving in Greece. From the Port, where formalities involved a swift glance at our passports, we cycled to Ipsos harbour to stay on 'Summer Song'. The next morning we cycled in pouring rain to Corfu Town - about 9 miles - and, after removing dripping rainwear, climbed upstairs to Corfu Property Agency's office in Kapo 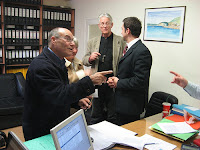 distriou Street behind the Liston, where our solicitor, the vendors - Jan and Ray - and their solicitor, had assembled. 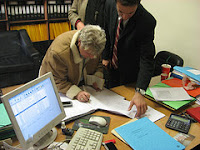 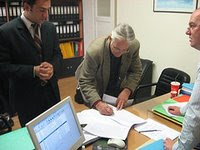 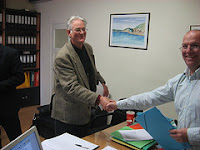 We strolled, this time under umbrellas, through wet puddled streets to the Notary Public - Philemon Paipetis - off San Rocco Square, where the deeds of the property, in Greek, were read out, discussed and explained to me in English over coffee. Then with pleasant formality came the signing of documents and the shaking of hands. Copies of the relevant papers were handed me. John took photos, after which he and I went to a taverna and enjoyed a leisurely lunch before taking a bus to Ano Korakiana to enter the deserted property, heat up the water and enjoy hot showers not available on the boat.
* * * *
Sunday morning and I woke with a bad chest and a cough. Went downstairs. Let out Oscar and Flea, poured boiling water into a bowl of vapour rub and, with a towel over my head, inhaled the same pepperminty eucalyptus vapour that has worked since I was a child and took snaps with my laptop's camera. 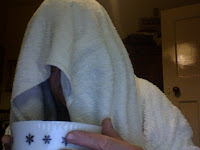 Curiosity leads me to the Common Cold Centre at Cardiff from whose website I read that I share the public belief that the medical establishment lacks remedies for the common cold - though ready to sell me solutions. The CCC mentions traditional remedies including - for a cough - a hot drink 'containing slightly bitter flavours such as lemon and citric acid ....' 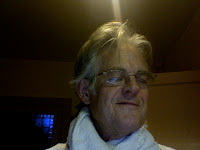 * * * On this day in 2001 C.M. Woodhouse died in Oxford aged 83. He is someone who's writing and thinking I have yet to enjoy though during my exploring of Modern Greek history he's been a regular presence. Andrew Leech finished an account of a meeting with the elder Woodhouse as follows:

'My final question covered any criticisms he might have of Greece. "The worst trait I can think of is that many Greeks in the political world have been unable to distinguish a real gift horse from the Trojan variety and have missed out on many valuable opportunities. They are just too busy counting the teeth to look at the legs, which saddens me." When one considers that not only was CW imbued with a love for Greece from an early age, but that he then volunteered to return, at 24, to fight alongside Greek resistance fighters; and later devoted his life to Greek Studies and championing Greek rights in politics, this must certainly put him among the cream of Philhellenes. My final thought, on leaving, were the the words of the philosopher Isocrates (4th Cent. BC): “And if a man should partake of our culture, let him be called Hellene!”'