.
This twig has an acorn like an English sessile oak, but its leaves are prickly like a holly's. I picked it the other day, from undergrowth next to the track that serves the masts between the twisting roads to Sokraki and Spartillas on the steep southern slope of Pantokrator. I've brought the acorn to England to try and grow it here. My kitchen table reference library led me to a blog called Blue-Grey by a zoologist - Black Rabbit - on fortnight holiday in Zakinthos last August. He described going from the floods of England to the fires of Greece. His blog contains finely captured images and detailed observations of local flora and fauna:

We thought these little trees (or shrubs really) were miniature Holly bushes. Wrong! This is the Kermes Oak (Quercus coccifera), a small, Mediterranean, evergreen shrub, the leaves of which do resemble tiny Holly leaves, but it also has acorns. The Kermes Oak is common in the region, and is host to the 'Kermes insect' which was used extensively for the production of cochineal in ancient times. In actual fact, our word 'crimson' is derived from the ancient word 'Kermes'.

Me to Black Rabbit:

I'm grateful my curiosity about the Kermes led me to your superlative blog, from which, incidentally, I've lifted your air photo of the August fires. Is that OK?

Fine by me. NASA might not take that view though?! Ho Hum. Good to meet someone as curious about the world around them as I try to be. Nice flickr photographs by the way...

Thanks for your remark about my proliferating images - by no means all mine. It's as disorganised as me. The web is now repository for the same mélange of pictures as mine and my parent's chest of drawers. I wonder at your camera, especially when you capture those exquisite close ups, but also that even the long shots of the wildlife I've seen have detail that most cameras can't give. That may be your talent as a taker of pictures - but I find long shots with the still shutter of my puny vidcam
(it fits in my pocket) affords only punctuation to mark the excitement of what I saw. I don't mind. My messy memory is a superlative camera ready for life's duration to transform images into words and ideas. Nonetheless your art with the lens is superlative especially when accompanied by your thoughts and the option of sublime music. Thank you Black Rabbit. You are Hardy's subject:

"If, when hearing that I have been stilled at last, they stand. at the door,
Watching the full-starred heavens that winter sees,
Will this thought rise on those who will meet my face no more,
'He was one who had an eye for such mysteries'?"

* * *
Put up a Christmas garland on the front door and twigs of mistletoe, from an old apple tree in our garden, over 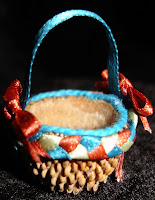 the porch. Our Advent calendar - a felt tree with 25 small pockets - hangs on the kitchen door. Each pocket contains a cloth toy with velcro on the back. Each day one is stuck on the on the tree above the pockets. Eight days to go before Christmas and every day is full with a day's work in Shropshire to come, then filming in Stockport and various meetings, and a supper to look forward to with the extended family at the weekend. Lin made a basket out of the Kermes Oak acorn cup.