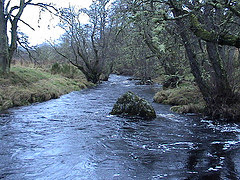 On Friday evening I realised that by moving to a smaller home three miles down the Strath - overlooking the River Farnack – my mother escapes the bilious loom of expanding Inverness. Last night, lower in the sky than in Greece, the three stars in the Belt of Orion stood out against the teeming suns of our galaxy while the rush of the river below her windows filled the night like waves on the mole at Ipsos.

In the morning frost had cleared the rain. After breakfast I cycled into Inverness via the road from Inverarnie across Drumossie Muir above Farr 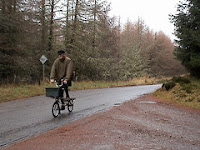 Woods. There’s a steady climb for the first mile, then two miles on the level. All along the verges here thrown in the gorse and broom lined grass verges were crisp packets, sweet wrapping, cans, glass and plastic bottles, cast heedlessly from passing cars, for few walk here. At a motorist’s pace this trail of fecklessness would be invisible, smudged into the landscape. Just before the exhilarating slope down into Inverness past Leys Castle and into the Culduthel Road I stopped - so easy when cycling - to gaze north beyond Dingwall towards Easter Ross where Ben Wyvis rises over and far beyond Inverness, so coated in snow it was difficult to separate contour from cloud. It seemed to assume the saddle form of Pantokrator. Near the foot of the hill came a new roundabout onto the 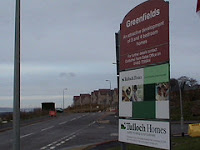 Southern Distributor Road, still raw, feeding into the largely unoccupied housing spreading south into Slackbuie, Leys and Inshes with space for golf and indoor bowling - settlements that seem anonymous, but with fine views and generous cycle lanes. These places will mature and take their character from the lives of those living here. The cloned dwelling units will be made different from each other becoming homes, gardens will grow, children and parents through local schools will create networks. Neighbourliness will surely evolve.

Before Castle Street Hill I wheeled right onto the Old Edinburgh Road, then left onto South Side Road, merging into Stephens Street and down the steep alley into East Gate and the city centre where I wheeled my bike through a pedestrian space teeming with shoppers. A man bearing a billboard saying ‘The End Will Come’ asked if I’d received the Lord Jesus and was forgiven as he was. I bantered. Surely we can never know? He said he did know. I became irritated at him for knowing. I fear people who know and almost shouted after him as he went on his way saying "God bless you!". Later he accosted me again in the crowd and said in jocular words "Jesus loves even cyclists, big man". "What!" I cried, poised for an argument "Isn't it motorists who need forgiveness?" But he was so gentle faced I apologised for my discourtesy and he asked me my name and I his. He had also acceded a point, agreeing we remain "sinners but forgiven". "Are you fearful of death?" I asked "A little disappointed if the doctor told me the news" he said “but I have my birthday and I have my deathday. I know I go to a good place and will have time to make my goodbyes" "Hm" I said "but didn't Christ despair? Didn't he cry 'Why hast thou forsaken me, father?'” He did not argue but we shook hands and went our ways after he'd handed me a small tract: "Oh that men would learn to live as those who will one day die". My lord plays such tricks on me! I could hardly stop smiling happily for the teasing of this, especially as on Thursday I spent all evening at Brin Croft in deep conversation with a local farmer who has been among those leading the campaign to get redress for organo-phosphate poisoning who'd been made sick from his sheep-dip. He had built at his expense, and a grant from Woodland Trust Scotland, a path along the Farnack, passing through his land, a pleasant stroll with several footbridges so that children and parents had a safe stroll to and from Farr school to the bus stop and homes at Inverarnie - a walk that anyone could enjoy. He was a Gideon and he and others – "many of us - place Bibles in hotels" - something I knew well enough. I mentioned my faithlessness without trying to proselytise, and he likewise. We discussed love and death. I said that later in the month when I was in a central London hotel for a Christmas supper with my Greek family I'd check the premises for Bibles. "Haven't you been told that you might offend other faiths?" I'd asked. “That's a worry among the politically correct. When we blitzed North London recently we came to hoteliers who were Muslim. They 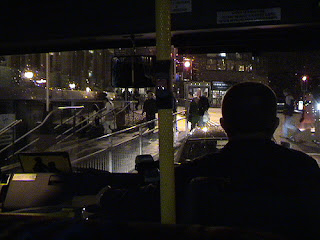 welcomed our work."
I returned from Inverness on the 1725 Whitebridge bus from Inverness Bus Station - fare £1.80 - which dropped me neatly at Inverarnie Stores. There were six silent passengers on board. We headed west on the Culduthel Road and up the hill and along the dark road across Drumossie Muir, then down to Inverarnie Stores where, as I stood, one of the silent passengers sprang up to help me get my bicycle down from the bus, which headed into the early night.

On Saturday morning our guest from Thursday evening dropped round with a pristine Gideon Bible for me, while was still in my nightgown. We'd had a most interesting argument that evening about his preferred translation. I spoke of my liking for the King James. He'd tried gently to change my mind, reminding me that James had commissioned writers who would aggrandise his crown. I learned more about the provenance of the King James and its parent, the Geneva Bible. 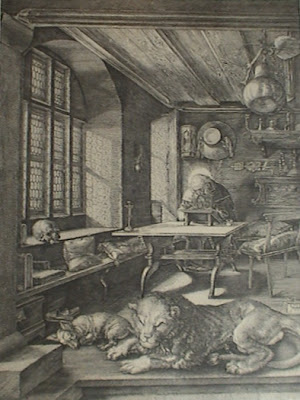 My mother's patron saint is Jerome. Her home feels like this delightfully furnished study of hermetic retreat from the troubles of the time as depicted by Durer. I've been playing a tennis court witness between John Mearsheimer’s and Stephen Walt's book The Israel Lobby and Alan Dershowitz's rebuttal Debunking the Newest – and Oldest – Jewish Conspiracy. All these authors have a case and so I am for the moment intellectually paralysed - my normal condition - except when humour enters, but this matter is remorselessly devoid of humour. So I've been reading P.G.Wodehouse but someone who used to have me in stitches now sends me to sleep. 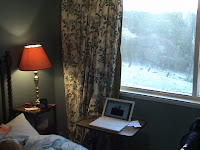 No doubt Jeeves could help. I've also been reading more of Veremis and Koliopoulos on Modern Greece in the knowledge that such liberal history is strongly contested (my Amazon US review of their book). The last few evenings Mum and me have rewatched Kenneth Clark’s 1960s TV series on Civilisation – now on four DVDs – a dazzling marriage of subject matter and the new medium of colour TV produced by a fledgling BBC2. Any new study of such a subject would need to be presented in narrowcast in ways I - schooled in broadcasting - cannot yet grasp. Perhaps we await the geniuses who will invent the grammar or perhaps I should follow silver and gold thread already woven into the coarse fabric of the internet. For the moment narrowcasting, from its early stages as cable TV, now leaving that parent far behind, is flush with technology enthusiasts - essential - but consumed by their fascination with the machinery, rather than the music it plays, the food it cooks, the prose it writes or the pictures it paints.

* * *
I've phoned Aln in Corfu and had the prognosis on our dodgy roof. He's made positive suggestions that Lin - when I spoke to her at home on the phone - felt gave us cause for optimism. We'll let the roof at 208 stay as it is until we get there in January. Aln also says he'll do our upstairs electrics and has found two Greek roofers who work for another friend of ours. The estimate for repairing the woodwork that M had felted over without telling us, for restoring the insulation, then putting on thicker roof felt and then the tiles under chicken wire to hold them steady - not ellenik - sounds fair.