Empty chair by a window

Eleni Karaindrou’s music for the film The Weeping Meadow - the seventy year old Theo Angelopoulos' lament for uprooted and mislaid communities of Greece. In 1919 it was from the beloved city of Odessa that families fled towards Thessaloniki. I'm starting to read about the catastrophe of 1922 when a million refugees entered a country of five million, when the Turks fighting back against advancing Greeks occupied Smyrna and burned it, killing 1000s, ending Anatolian Greece. [See Despina's Rug. The word 'catastrophe' - even though one might assume it could include 'murderous mayhem' - has become a diplomatic substitute for genocide, in the interests of maintaining present negotiations between Greece and Turkey.] 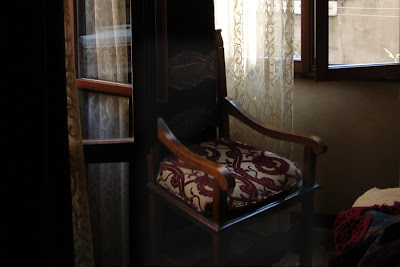 This photo, downloaded from Xipeteon's photostream on Flickr, makes me happy for its craft and sad for what I project upon it. It's unique, yet I can make of it what I will. I thought of the Song for the unification of Europe - sung in Greek [the words in Greek and English] by Zbigniew Preisner for Three Colours - Blue by the late film-maker, Krzysztof Kieślowski.
Ean tais glosais toon antropoon lalo, If with the tongues of men I speak, kai toon angeloon, and of angels, agapen de me echo, love I do not have, gegona chalcos echoon e kumbalon alaladzon. I have become a gong resounding or cymbal clanging. Kai ean echo profeteian, And if I have the gift of prophecy, kai eido ta mysteria panta, and know mysteries all, pistin ore metistanai, faith mountains move, agapen de me echo, outen eimi, outen eimi, outen emie Love I do not have, nothing I am, nothing I am, nothing I am. He agape makrotumai, chresteuetai Love is generous, virtuous, he agape ou dzelloi, erpereuetai, ou fysioutai. love does not envy, boast, not proud is. Panta stegei, panta pisteuei, panta elpizei, panta upomenei. All she protects, all she trusts, all she hopes, all she perseveres. He agape oudepotte piptei, Love never she fails. eite de profeteiai, katargetezontai, be it prophecies, they will cease, eite glosai, pausontai, be it tongues, they will be stilled, eite gnossis katargetesetai be it knowledge it will cease. Nuni de menei, pistis, elpis, agape, ta tria tauta, So remain, faith, hope and love, these three, meidzoon de toutoon, he agape, but the greatest of these is love. Instead of this phonetic transcript I'll try to write these beautiful words in Greek.


[The film is the first of three on the themes Liberty, Equality, Fraternity (the colours of the tricolour). Blue is about the journey of a young woman who loses her child and husband in a car crash. She and and the other main character orchestrate the composition her husband was working on. Part of this we hear in the finale which I've down-loaded from You Tube.] [See Diamanda Galas (see 02.42 on YouTube) Galas speaking and singing of her intense musical attention to the fate of the Pontic Greeks and the Armenian dead. A review on Amazon: 'She once said "My voice is an inspiration to my friends and an instrument of torture to my enemies", and this was no bragging at all. I saw her perform Defixiones live in an old castle in Belgium. She was there for a month, playing three evenings each week, all sold out. People came from Germany, France, England and the Netherlands to see her. As her music doesn't fit in any category (except maybe super avant garde), her audiance didn't eather. Classical music lovers, people from the Jazz-scene, punks, gothics, rich and poor, all kinds of people gathered there. And I swear to you, within half an hour 80% of them was crying because her litanies of pain and isolation are so powerful...'] [See too, this excerpt on the Pontos from Domina Graecia 'Ah, Patrida mou hamene, na’seha akoma agalia' (May 2009 - this link inactive ] [Back to the future: On YouTube there are rebetiko songs and some strong comments of conciliation between Greeks and Turks with animosity, were expressed in abuse, being eliminated by the thumbs down/thumbs up icon]

* * * In Corfu at the end of November I heard how things had gone when the defendant in the Corfu Frog Farm Crisis was brought before the Court. The Judge, hearing statements from our friend and the accused, seemed minded to believe our friend's account of what had happened. After a conversation with the lawyers and conferences between them and their clients he intimated, he was seeking to avoid a custodial sentence, lest it inflame the dispute into a feud - a serious matter. His hope was to approximate a conciliation.


Judge - The defendant is ready to apologise rather than face a prison sentence for his alleged crime Ach - I apologise Aln - What for? When for? Where for? I don't accept that apology Discussion in court Ach - I apologise for anything that may have caused you to be offended. Aln - 'Anything'? 'may'? I don't accept that apology either. I want an apology that includes an admission that Achilles lied about us in court and physically assaulted us in our house. Defendant is now faced with a requirement to make an apology in open court that entails an admission of guilt and of giving false evidence to the same court. More discussion. Defendant's lawyer is seen arguing with his client. Then: Ach - I apologise for having assaulting you and made false accusations against you. Judge - Do you accept Achilles' apology? Aln - I do Case over. All depart

Instead of using violence to defend himself despite great provocation, Aln had resorted to the law. As a foreigner in front of a Corfu court he had, by his comportment, proved a convincing witness. The Judge had wisely not pursued the full possibilities of the law, via a prison sentence for the assault or for the perjury that accompanied the defendant's final apology, though his words were now on the legal record. Aln thought that Achilles might have learned a lesson about him - that a failure to fight back physically was not a weakness. His neighbour, though a foreigner, was ready to seek redress by bearing witness in a Greek court and had, when a resolution was in sight, been able to insist upon an unambiguous public apology.