Today, after buying crusty bread in St.Pol, we visited a stony beach – Plage du Traon Erc’h – on the edge of a barely rippling sea. Arthur and Dot walked carefully and watched us as we went in search of interesting stones – ones that sandwich strata that cooled millions of years ago, with paperweight shapes, to put in the boot. Durrell quoted a Cypriot maxim - ‘A fool can throw a stone in the sea, a thousand wise men cannot get it out’. I can take a stone where its been for a billion years and put it in our garden in Birmingham. It’s nothing to what people do when they burn petrol – using in minutes what took a 100 million years to make.

We picnic’d above the quiet sea then, after the French came back from lunch, visited the Jardin Exotique just south of the ferry port at Roscoff. An effortless stimulating maze of touchable, smellable, eye-pleasing plants and trees is spread around hardly three hectares along a shore with granite eminences that seemed dry-stoned by giants – so neatly did the piled up boulders fit each other, providing home for sturdy succulents and semi-tropical plants like the slightly sticky Madeiran geranium that, unhoused, would probably struggle across the channel. Children across Europe were at their desks and people as noiseless as us and married as long wandered the paths, speaking, when they did, in undertones. I heard a train pass twice and on the way into town noticed a rusty one track line. Later I cycled to the SNCF Gare for St Pol de Leon and was reassured to read on a notice above an unweeded platform by a shuttered station that some 10 trains a day travel the short run between Roscoff and Morlaix, where faster bigger trains connect.

This evening M.Moal rang our bell and, smiling, handed us four enormous artichokes. I thanked him profusely and thought of melted butter.

After supper I cycled north and but for the 1:25k map I’d bought earlier would have been lost. The evening was windless and chilled; the damp land quiet and drear; the mist absorbing sound, muting light and removing the elongated contoured pattern of evening shadow. Narrow roads turned in directions that did not chime with my senses. On a cycle, as when walking, hearing is a means of orientation but without a breeze the sound map blurs, the leaves give no echo. I was reduced to ensuring the human signs at crossroads matched the human symbols on my map. Place was elusive like the start of a film that ends badly. I was crossing a terrain comprehensively transformed; nothing fallow, hardly a space not earning its living. The contours were the same but all humans not units of production or consumption had gone, leaving no evidence of society, no locals. Hedges are rimed with escaped yellow rape. At regular intervals were brand signs for gîtes rural and the decals of agribusiness to guide pan-European trucks to and from distribution points. I came across a vast site for round-the-clock agricultural collection and distribution – hangers surrounded by tarmac, humming hoppers and conveyor belts, flashing yellow lights on forklift trucks, a retail shop near the road – a centre not a place. Turning to a back road that would complete my circuit I crossed a bubbling stream that was rich brown, unnaturally opaque, and cycled a hundred yards by a walled estate marked on the map as a ‘château’, but looking through a gap in the trees like offices, before arriving back at Keronvel.

I went through a gap in shrubbery to look at a duckweed covered pond at the end of the drive. M.Moal strolled over. 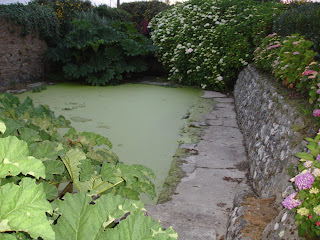 He told me this was where women came to do their washing. We smiled at this ancient practice, made gestures referring to biceps. I told him my belle-mère still washed by hand. He was appropriately surprised. I said I thought she was ‘the last’.
* * * * * *
The low now almost static over western Europe brings luminous evening skies. Lin took this from our front door after supper - about 10 o'clock. 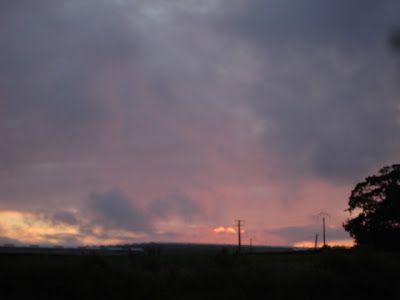