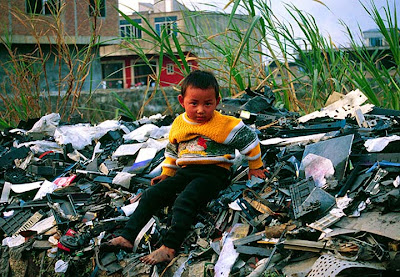 As soon as I'm home I'm back to being a busybody. I've started a Flickr Group called 'International Flytipping' having found the telling image of a Hunan child atop new tech waste - the stuff that drives my laptop. I thought 'why not post more images of flytipping?' and sent an email to Robin Kevan - Rob the Rubbish - who clears the stuff people leave on mountains, including Everest. My intention will be to encourage people to post images which they can – via the Group's URL

– email to agencies and individuals who through embarrassment, shame or through being informed may take actions that reduce a problem that blights so many places - especially here in Handsworth, but also in Corfu. Some officials committed to professional excellence in preventing flytipping welcome this publicity. It creates political pressure to direct greater resources to the problem. I'm asking people to 'film it, locate it, post it!' With digital cameras in mobiles linked to the internet it was never easier to pass on such images and it looks as if I've got four members since last night - though all but one of the 6 images so far posted are taken by Linda, some on the low road to Ano Korakiana this month.
Posted by sibadd