The realm of wonder 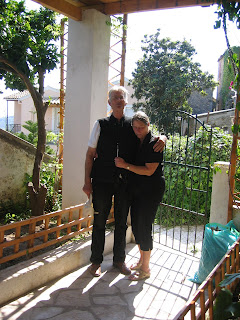 Thursday, April 12, 2007
Yesterday we started clearing the small garden, to see what lay beneath. I opened the gate onto the path to the lower road. Neighbours brought a house gift. Our builders arrived to measure up the roof for an estimate of complete repairs as well as removing the concrete rubble blocks that the previous owners had set up beside the house to stack rubble and which have brought damp into the lower rooms. A young woman from the house behind when asked said “It was very nice” leaving unfinished her view that improvements had been unsuccessful. We agreed. An outside staircase to a balcony had been removed. I cycled back to Ipsos and Lin came down in the car. Shared a lager and an altercation with itinerant topers whose game is to ask questions, top the answer until someone remonstrates and then say ‘sorry’. We were part rescued by a friend who’d winked across the space at the bar into which this couple had barged. 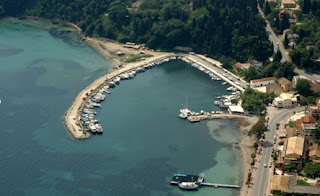 Summer Song lies near the end of the seaward arm. of Ipsos Harbour. The owner of the little yacht moored next to ‘Summer Song’ until February, sailed for Italy while we were away, but Magnus, her skipper, is now in hospital there after he became ill while crossing the Straits of Otranto. The Italian Coastguard came alongside his drifting boat but in trying to lift him from his boat he dropped into the sea from which they only finely rescued him after two hours in the water.

We went into town and drew money from our bank behind the Liston, bought bedding, shower curtain and paint in the Evraiki [Back to the future reference: Look out for a forthcoming book by Marcia Haddad to which I was referred on 27/7/07 by Stan Boardman-Jacobs' 'The Day My Heart Broke']
We drove to Democracy Street - the back way, turning off the Sidari Road along roads lined by the pink blossoms of Judas trees, to gaze from our balcony at the sea and the woods and the village above and below and discuss plans for the house. I checked the shop nearby could receive our mail. “Yes, two or three times a week it comes.” I said the bread was good there. The owner said he used to have a bakery there. The wood meant the bread lasted 5-6 days, “but I don’t want to talk about that.”

Monday, 9 April 2007 Ano Korakiana, Easter Monday
We visited 208 Democracy Street and met the builders. It may be necessary to redo the whole roof rather than just repair parts of it. Ano Korakiana’s Easter Monday procession gathered round the bend by Little Venice. We had a coffee – skirto and nescafe – at the kafenion and gingerly wandered up Democracy Street to the ravine bridge where we waited. The drums started. The procession moved off. A troop of cub scouts, cross bearers and then the Ano Korakiana band. Woodwind – clarinets and flutes – to spice the grander sound of the swaying trombones, trumpets and the drums. They were playing San Tomasso. Solemn but not sad. Then three ranks of dignified women in suits with purple ties – part of the choir. Then passed – St.Peter and St.Spiridon and St Michael on banners, then priests. One saw us and nodded and said “Christos Anesti, Where from?” “From England.” I should have replied "Anethos Anesti".

We waited a little and than strolled on, wary to follow, but not join the procession as it played down Democracy Street. We visited some friends at the bottom of the village. Later on the low road past olive trees, Lin stopped the car and we could hear bees not yet recruited to the killing labour of monocultivation, doing voluntary work among the wildflowers. 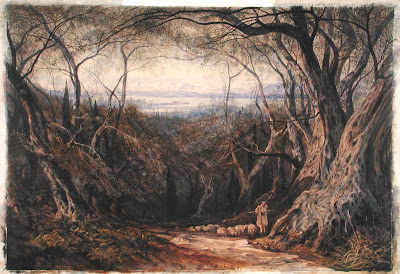 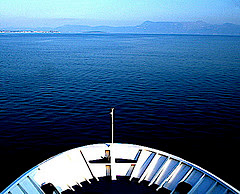 The big ferry from Bari sailed hardly a 100 metres by the corner of north east Corfu in the dark and on to Igoumenitsa where we landed and trollied our luggage a kilometre along the seafront to the Pantokrator. We remembered how when we'd come this way the previous November a south wind had blown with such strength off the shore our ship had been unable to dock for two hours - a wait that had given us a new friend in Hy from Ayios Markos who'd ridden home with us once we'd made it to Corfu. 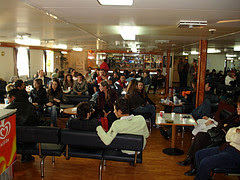 She was very full, convivial chat drowning the noise of unwatched TVs in the familiar saloon. One family, at least, had brought a whole lamb for Easter. It lay wrapped beside them but as the crowd increased was stowed below their seat. 'One vast realm of wonder' (Canto 88 Byron's 'Travels of Childe Harold') - words of a lover, blind to flytipped refuse, strip mall development, bleached menus selling 'pise and ships', UK redtops and eurotrash porn, dumb t-shirts, fuming traffic, wall-to-wall football on TV and shaven lads with rosy bellies. But Greece makes me blind. I get a lump in my throat as I see it twinklng below from a late night plane or rising from the sea from the deck of a ferry.

The air was crisp as the ship headed north west over a flat sea. At the Port of Corfu by mid-morning Kostas' boy met us with a car. We left it outside his office with our luggage and strolled towards the Liston until we were standing tightly surrounded by people of all ages below fine balconies packed with onlookers, some preparing to drop terracotta pots on the marble streets below. As even larger pots appeared in the windows above we "ooh'd" and "aah'd" in anticipation. At noon the cascade began. 'Crash" "huraaaaaa" "crash" "huraaaaa". The water in the pots, as well as holding the sins of the preceding year, ensures shards don't explode among the onlookers. The sun shone bright. the crowd was civil and happy. A few minutes later with bands playing we strolled through pottery strewn streets, eating roast lamb, onion and tomato on pita bread.

Friday, April 6, 2007
All seats to Bari from Rome were reserved. At Termini by 8.30am we walked through the bustle and boarded a Eurostar for Bari hoping for the best. Another passenger, a young teacher, Valerian, helped translate, asking the guard if sitting on our luggage would be OK. He nodded. A young woman ran to catch the train as it started and the guard opened the door so she could hop aboard with a broad and slightly out-of-breath smile of gratitude. In a spacious lobby at the end of the last carriage we could gaze through glass at the receding lines as our train sped south. 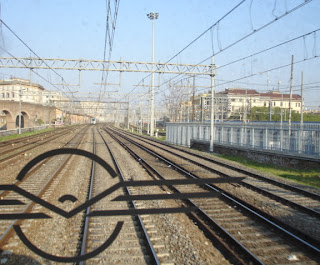 The snack trolly was a door away. We enjoyed hot chocolate and espresso. Later Lin made a picnic – bread and wine. Cassino, Caserta, Foggia and then some seats came free. We ate, chatted and read. The train was clean and roomy; the passengers civil without needing words. No-one sought our tickets or made announcements.
At Bari we left our luggage at the station and soon found ourselves in a Good Friday procession through the high sided streets following or being followed by a brass band in grieving sonour swaying amid a procession of saints carried on biers behind Jesus - ecce homo - bearing a cross to Golgotha by crowded pavements, shops (few shuttered) bars (none closed) a nunnery and commuters in their cars queueing to get out of town. 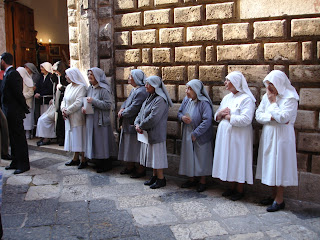