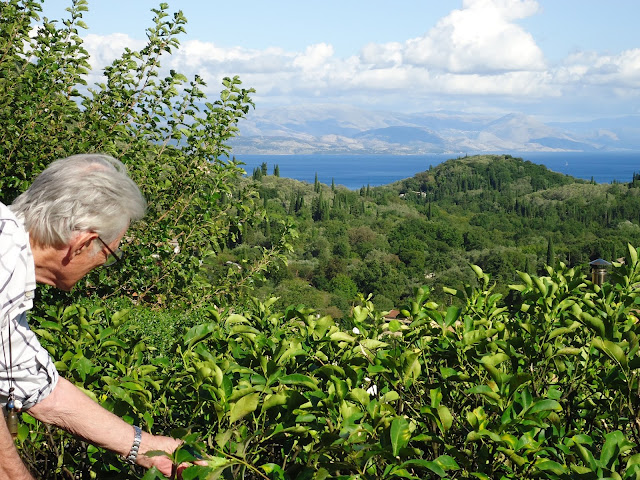 Early November 2021? Will it be much the same as early November 2020 when the Coronavirus pandemic persisted in being as unfamiliar to its millions of victims as myxomatosis was to rabbits when it first began to kill them, or as the citrus scale insects were to the lemon and orange trees of Corfu – now blighted, and even killed, from one end of the island to the other. We’ve sprayed our two lemons and orange with doses of olive oil soap dissolved in water mixed with cider vinergar – a cup to 10 litres of grey soapy water.

When we arrived 9 weeks ago, we found to our delight, at least one of our trees laden with lemons, now, in November, turning yellow. The orange is blackened by mould on its leaves, trunk and branches, lacking the new shoots and even blossom that we see on the lemon, whose top growth I can examine from our balcony. At the local garden shop Evangelina has recommended a spray – a mix of Sivanto (2.5 m/l to 5 litres water) and Electro pesticide (ditto mix) - to kill, and by resting on the leaves, break the life cycle of the ‘black spiny insects’ as she calls them.

“Yes! They are now all over Corfu since three years. We had a meeting of agronomists from here and from the mainland, where in many places citrus is a commercial crop. They said this infestation is confined to Corfu. 'We are not worried'. They are wrong. It will go there.” 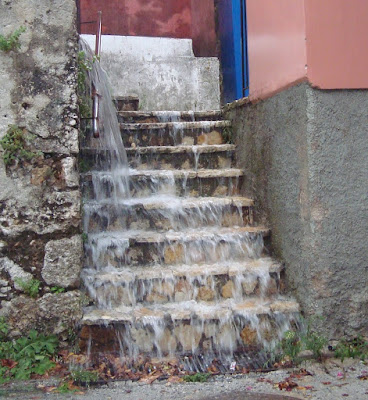 "I think you're mad"

Sunday had been sunny. Monday started overcast and by midday it was raining steadily - rain that sets in and does not let up, driven by a confident wind from the north east. I don’t drive much. I set off in our small hire car for Sidari about twenty kilometres north and had most of the roads to myself, turning west in Sidari and winding back a few miles down the north east coast to the small haven at San Stephano where I recorded a weblink displayed on the upperworks of a ferry moored in the deserted carpark, the Diapontian islands Erikoussa, Orthoni and Mathraki on the close horizon. A rock cluster like a sailing ship driving towards the closest of the islands.  The rain had cleared. On Corfu - just 40 miles north-south - there can be several kinds of weather at the same time.
Driving south towards Avliotes and Arrilas, I stopped for a coffee and butter croissant at Melisito bakery, where the warm wind, turned even further east, made the plastic screens, between me and the rainswept Trompetta panorama, rattle like a road drill. I'd returned to the rain zone. The peaks of Albania lay across the horizon under the overcast. 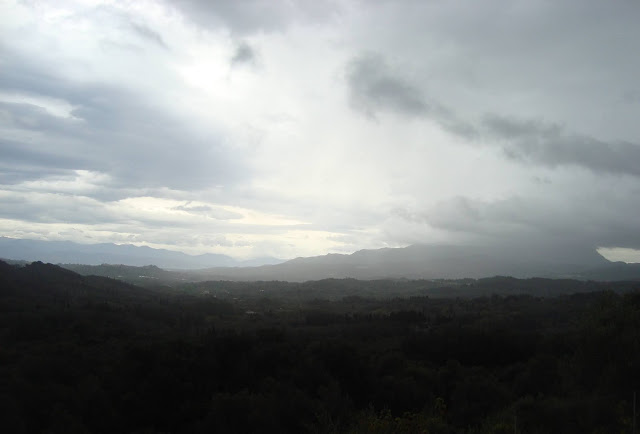 Instead of taking the usual sharp left turn in the middle of Arkatades I took a punt on driving on up towards the web of small roads heading for Paleokastritsa. The road shone with the driven rain. Trees and shrubs drooped with the wet. 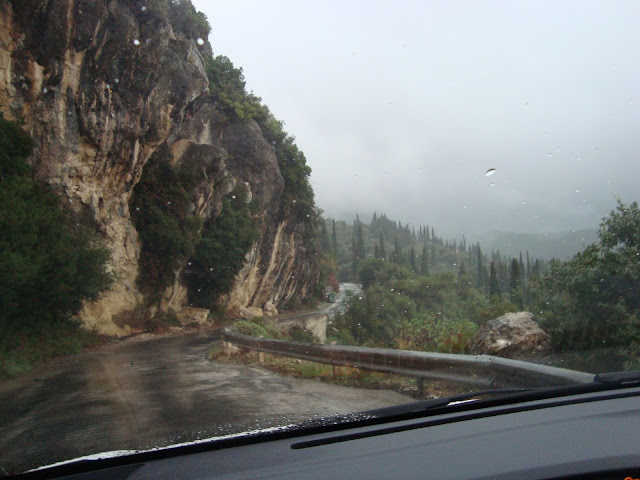 Down a slope, almost in the verge, I saw two trudging figures who resolved into walkers. I stopped and gestured for them to take a lift; travellers from England on a walking holiday, for the whole rainy week. They clambered inside with their wet coats and sticks steaming the car windows. After tea and chat in their borrowed study – cosy and well furnished – down an alleyway in the one way section of Bella Vista, I drove down the mountain to the familiar Paleo road, turned past the donkey sanctuary on the thin splitting road through the fields and hedges to Skripero and home.

How the days have passed. So swiftly. It’s now a little chilly in the evenings. Lin and I keep warm with more woollies and an electric fire – on and off -  at supper; sometimes watching police procedurals in icy places like Helsinki northwards on Netflix.  For days the sky has been almost cloudless. 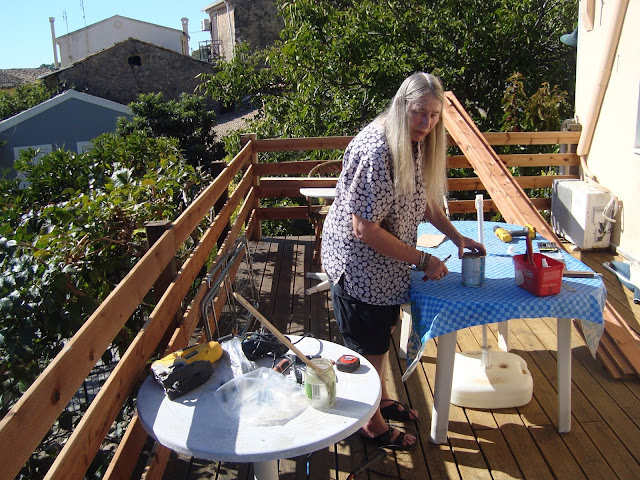 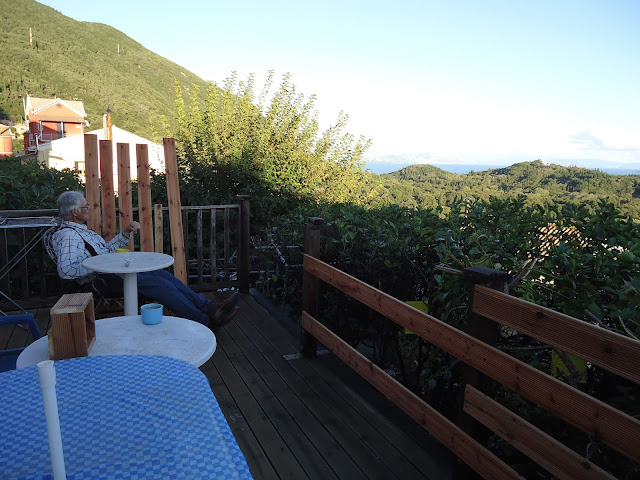 We've been rebuilding the balcony bannisters. They were becoming hazardous, even rotting in places. I’ve just dug out two olive planks, used for a makeshift door that I found years ago in the apothiki. I suspect two house builders were laying a fine tongued and groove floor, and agreed to keep two off-cuts. After removing most of the nails and sanding bare, I sawed squares, drawn out by Lin to miss the cracks and remaining nails in the hard sweet smelling wood. These now top and protect the balcony uprights. 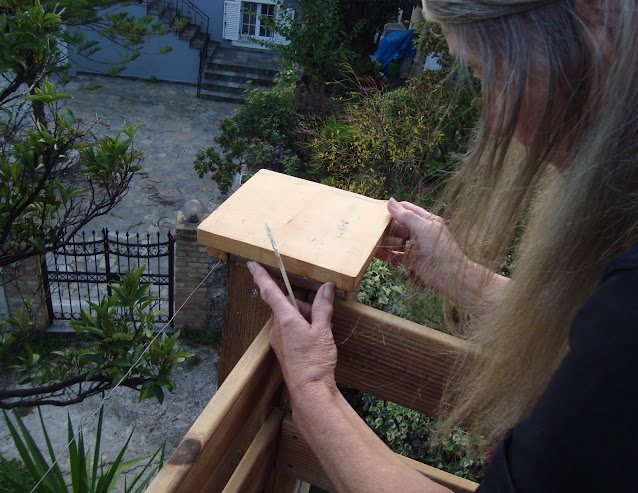 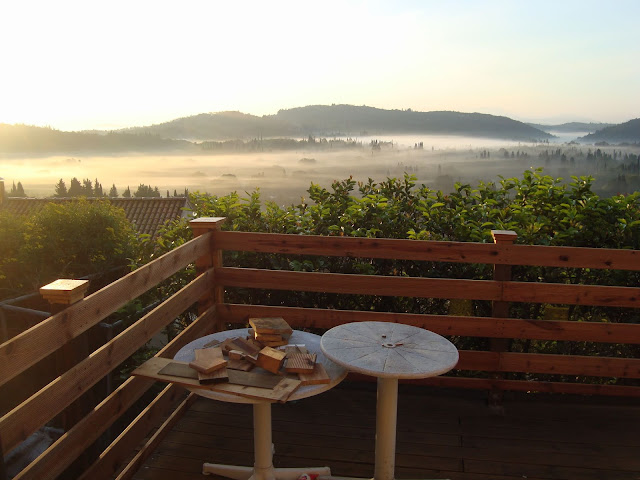