There is something exhilarating about getting successfully through the Greek bureaucratic process! I have just left the Corfu Port Authority. I came from Ano Korakiana on the 9.00am bus to Sarocco, cycled through town to the sea and parked my little folding bike outside the office next to the quays. I entered, in suppliant mode -  different from dealing with HMRC on-line, now normal procedure in UK. I might, in earlier times, have arrived here with a gift to ease my way, but that has become incorrect. Some even call it 'corrupt'. So, with help from a friend at the end of my mobile who's Greek, I passed a Cerberus (Cerbera?) - a lean Coastguardian in uniform - in the front office, at a desk next to a barred enclosure. She received my old unsmart mobile, spoke easily to my friend, handed me back the phone, and had me follow her across an atrium to another office where I was introduced with economy and asked to wait, which I did, rejoicing at such progress. In hardly ten minutes I was asked to hand over my ID by a young woman who spoke English. In seconds she'd pulled a form from her desk, written on it in pencil in English what I needed to say about myself - tax number, passport number, name of boat, registration number. My cup was near full. Outside I could see the harbour full of ships and a glimpse of the hazy mainland under fluffy clouds over the ruffled blue of the Sea of Kerkyra.
"Take your time" she said gently handing back the one page form.
I scuttled out to the atrium. At a chair and table I carefully filled in the form for announcing that our 'ship' Summer Song (being now 'for sale') was officially 'OUT OF USE' (IMMOBILITY), and thus not subject to the new yacht tax implemented this year, but mooted in 2014, which must be paid by this 5th May lest I be fined, or declare that our boat is decommissioned. 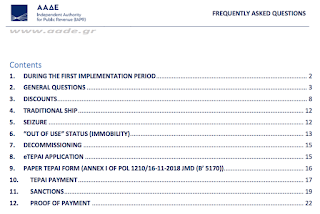 I returned, waited through a conversation between colleagues before being gently summoned to hand over my completed and signed form and Summer Song's registration. 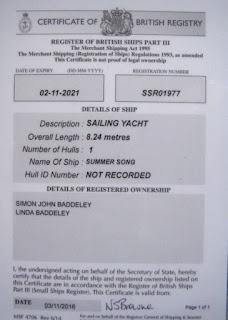 With my flat cap in my hands in protective mode I watched as my form was checked by another Coastguard. He nodded, wrote details in a ledger and invited my signature again before taking my registration document and stapling it to the completed form. The work lay on his desk.
"Do I need a receipt?"
"No"
"If I want it back?"
"Just come in here. Give your name"
Heading back to town, where I catch a return bus to Ano Korakiana or Sokraki, I phoned Paul to thank Lula for her role in gaining me the right entry and ultimate success in surrendering my right to sail my boat.
"Why do I feel so light headed, Paul?"
"It's the way here"
"I'd be a perfect candidate for Stockholm syndrome. I'm actually grateful for being allowed to do this signing away of our right to sail our boat"
As I'd left I'd popped my head into the office at the entry to the Port Authority and said "Thank you for your help" 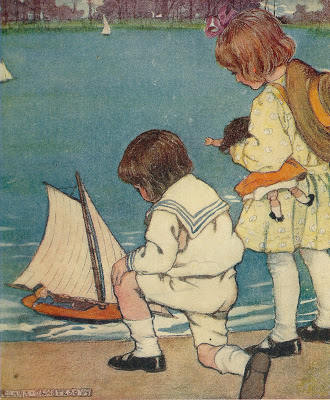 Email ThisBlogThis!Share to TwitterShare to FacebookShare to Pinterest
Labels: Port Authority, Summer Song. yacht tax. out of use