After I'd carried our luggage down the 13 steps


After I’d carried our luggage down the 13 steps, while Lin drove on down Democracy Street to park, I returned for our shopping - packed in three cardboard trade boxes. Carried down, I placed these beside the luggage, inside the porch, our closest door. I walked round to the veranda, and opened the other door, in familiar dark I switched on the electric. I walked down to below the apothiki, raised the iron lid above the communal taps, wary of scorpions, and turned the lever on our water meter; and a second lever above the pressure gauge on the side of the house. From the dining room, I opened the sticky front door to heave in luggage and groceries.
The air seemed clean and fresh indoors. “The house feels cool”
Lin had the kettle going. Tea and coffee.
I’d glanced at the tidying to be done – the wisteria sprouting whippy tendrils to be cut back; the reluctant Bougainvillea showing at least some red flowers; invasive pelargoniums to be curbed; dried summer-shed leaves to be swept and put on the compost; litter at the bottom of the path from the street; and the rest of the path, as it passes below the house, needing my sickle to clear our way to the lower road.
I checked to see how the citrus trees were doing since their infestation with scale insects this last year has prevented fruiting. I’d sprayed the trees with olive soap mix in the first week of June. Now at least there was no black mould on the top of the leaves preventing photosynthesis. Although the scale insects had been busy over the last 11 weeks – all my flypapers hung in the branches were covered with their remains. Yet more were stuck on the underside of almost every leaf. 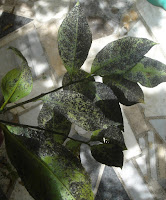 “But” said Lin “they're all dead”
The sticky substance with which I’d circled trunks and veranda pillars seemed to have stopped ants from their suspected symbiotic alliance with scale insects, though wasps were hovering and settling amid the leaves, sipping the remains of the honeydew the scale insects exude.
“And look!” said Lin “I can see at least twenty new lemons”
My heart rose at the sight of them, almost hidden amid foliage.
"Goodness! How that's cheered me up. I wasn't even bothering to look for new fruit yet."
Others in the village have pollarded their trees to skeletons or sprayed insecticide that kills all insects indiscriminately, without guaranteeing that scale insects will not return on new leaf growth. 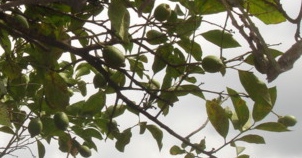 I suggested we spray again - with olive soap solution only.
“Not so you harm the leaves”
“Perhaps leave it for the moment. Hope for the winter and spring. Pray for new blossom.”
“Sponge off the dead insects from some leaves. Check to see if they return.”
Later our neighbour Katerina spread her arms in exasperated despair. This ‘no-lemons’ problem is "everywhere in the village”
I saw lemons in a net on the fruit counter at Lidl, imported from Spain.
Having lunch in Doukades with Marie and Bo Stille - naturalists,, ecologists, books on the lizards, dragon flies, snakes, slow worms, frogs and toads of the island under their belts - I showed them sample leaves covered in dead insects and one of my flypapers and what we'd done to remedy the infestation.
"Sometimes trees learn." he said "They evolve resistance"
"Really?"
"Sometimes. Yes, Perhaps you should leave things to your trees." 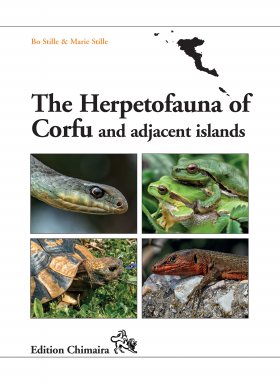