'...the thick rotundity o' the world'

I wake around 2.44 in the morning. Oliver, our grandson, sleeping on his mattress by our bed is coughing. I gently raise him up while he. half-asleep, lets me remake his ruffled sheets.
“Can I have dog back?” he murmurs.
I slide the still warm hot water bottle in its dog-sleeve back beside him and return to sleep. Lin comes to me later and wakes me for a moment
“He’s been coughing” I whisper.
I hear her tending to him as he slumbers. It’s 4.15. I’m not tired so I slip downstairs and go through my morning routine. Turn on the electric water heating, feed the cat, let Oscar in the garden to bark at shadows, make myself a large cup of tea and clean up the cat pee where she’s missed her litter tray again. Loads of time before my train. I send a picture of the defaced Gypsy Memorial in Black Patch Park to Cllr Richard Marshall, Sandwell MBC’s Cabinet Member for Leisure – this after the council’s website with which I’m long registered blanks me third page in when I use it to report graffiti. 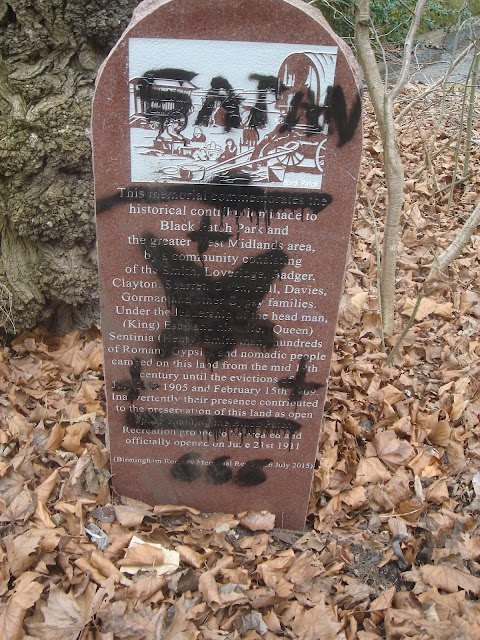 Tap tap tap. Stuck! The page sticks on my screen. Phil Crumpton and I are going with Andrew Simon – all members of the Friends of Black Patch Park – to see Cllr Steve Eling, Leader of Sandwell Council on Thursday. Phil and I were looking at the £16.000 clean-up carried out by Sandwell Council staff over the weekend, after yet another extensive bout of commercial scale fly-tipping on the park. It was an opportunity to vent. Cursing like King Lear writ small on 'our' small park's blasted heath. Gradually calming to muttered imprecations

“They’ve placed everything about the Black Patch into a limbo when no-one even looks at the issue – politicians or managers. It’s denial and avoidance. They don’t want to know”

“At this meeting I’m not going to start getting into compliments on how swiftly the dumping, once reported in the media (which went national) was cleared …That’s thanking a thief for tidying up after a robbery”


"Will the Leader have read our report and digested its analysis? I doubt it”
“You know I detest being like this. It’s weak. I sound like every other tedious old grumbler”
“No but sitting here in the centre of the Black Patch and having a bout of cursing is good for you and me”
“You and I, Phil!”

We climbed in the van, parked near the Soho Road, leaving Oscar to guard the cab, and had samosas, chai and mango lassi at the London Sweet Centre.
Is there a point where an accumulation of small slights turn into a syndrome, and I become … neurotic? These terms! Neurotic, Grumpy Old Man, dyspeptic dodderer, subject to the 'wiry edge of our fretfulness'.
As I cycle in the dark on Tuesday morning, at the head of our road I see a new resident has concreted his drive to include the pavement and green verge which his several vehicles have turned to tyre-scarred mud.
I enjoy cycling into the city to catch a train in the gloom of a February dawn. I collect passing and passed vehicle registration numbers; see if they'll turn into words or their initials will make phrases. It’s balmy weather. I decide to explore a route into town I’ve not used for near 18 months - through the Jewellery Quarter instead of down Constitution Hill. I get to the foot of Newhall Hill, and of course, the continuing reconstruction of the Old Library site still blocks my old route, and I’m guided into circumlocutions too tedious to detail. I should have known. My grumpiness is amplified by self-blame. To enter the new New Street station by this route I must negotiate new tram lines best crossed at right angles. In the great new Grand Central concourse I realise, looking at the busy timetable boards, that my train is one that stops at many stations on its way, via Northampton, to London. I’d vaguely hoped when playing clever with my bookings that I’d found a bargain deal on a faster train. Will I make my St Pancras connection? In theory 'yes', as there’s half an hour to cycle the few hundred yards from Euston to St Pancras.
I present my ticket to the slot at the barrier machine and it's rejected. Why? I see a Virgin Trains staffman approaching to help, as I gaze down in the manner of an affronted and puzzled old man. As I turn to him he has already turned back two gates.
I heard him mutter “You ignored me”
“I did not”
He returns and activates the gate – a large one - for me and my bicycle.
“Why did it do that?” He ignores me
“But it ignored me”
I pause, deliberately obtuse, between the doors of the opened gate, so he has to notice and shepherd the old man through the lumpish gates.
I glimpse him rolling his eyes to a colleague.
At a coffee shop I wait in a free-floating queue almost immediately jumped by a busy new arrival who’s cheerily greeted by a barista. I wander away, even as I hear another calling after me “Sir?”
At another coffee shop I order a ‘small’ latte. It is really called ‘small’ but the print was so small I squinted to see it. I get my coffee, but no receipt. I could walk away. Why fuss? It means a little bonus for staff. But I’m in grump mode.
“Receipt please!”
What next affront by man, or object, lurks to trigger my vex reflex? On platform 3A my train arrives on time. I walk with my folded bicycle to a convenient door. A red notice on the open button says ‘This door is out of order’.
On the train there’s a copy of a free newspaper. I leaf through three pages of futile print.
“Who reads this stuff?” I glower silently “The subs clocked Socrates’ guide on gossip – “Truthful? Good? Useful?” – and worked on its opposite. Thought. Did Socrates really say that or is it fake news?
Except for books, which seem to be having a slight revival, the only print I read on paper is my gift to myself, the NYRB, published 20 times a year, delivered at discount to my door, stimulating intelligence and understanding in these interesting times. 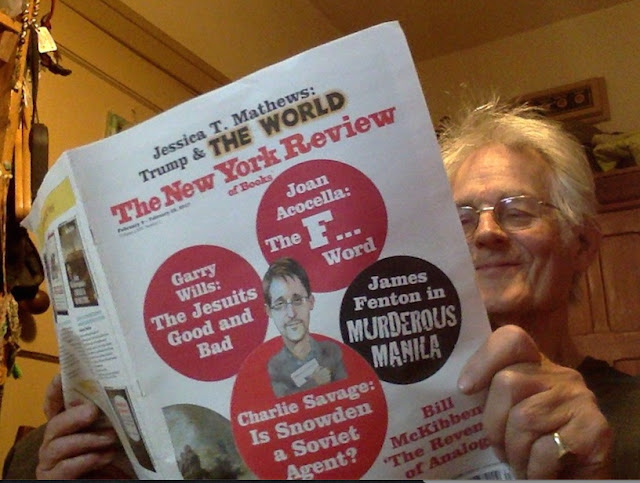 *** *** ***
In Centenary Square, Birmingham, under major reconstruction 25 years after it was created, a plane tree over a century old, was cut down this morning, as a precaution against a terrorist driving a vehicle into the square. 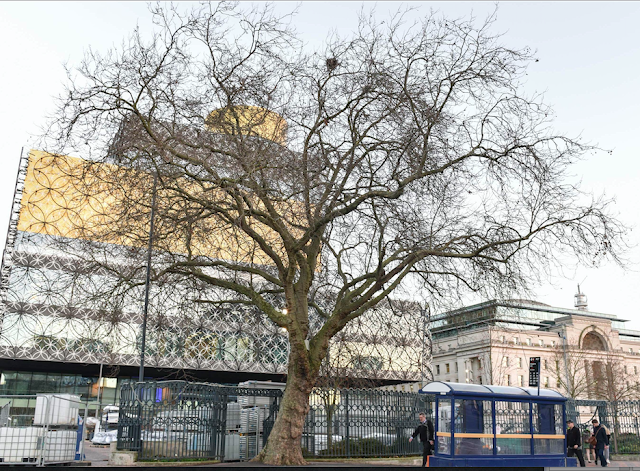 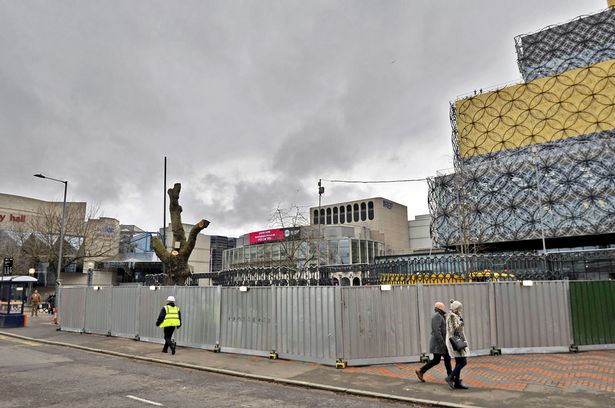