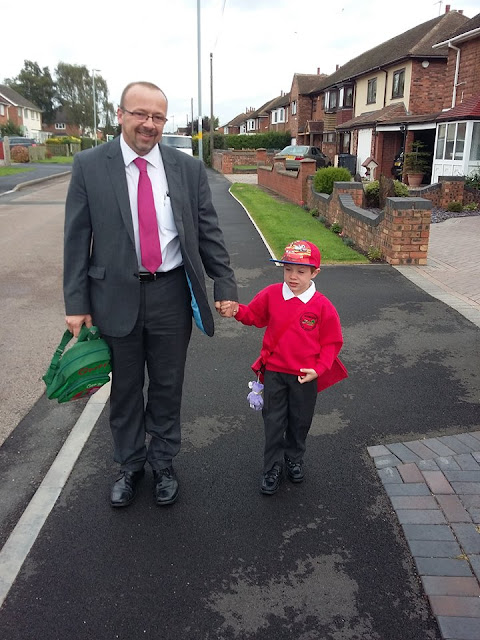 “I wish we could take Amy and the family to this island” I said to Lin "With Oliver going to school" – his first day on Friday - "their visits here will be even more hemmed by the airfare pricing”
"They can’t come when the ferry runs” Only July, August and September.
"Yeah! Fares gauged to school dates!"

Lin and I were on the ferry to Vido - a sturdy caique that chugs hourly between the Old Harbour and a jetty on Vido, a kilometre opposite. We walked with our swimming things on a rough track to a cove we know with a jetty and a narrow shore to lay out our picnic blanket and wade into the clear warm water. “It’s so easy to float!” 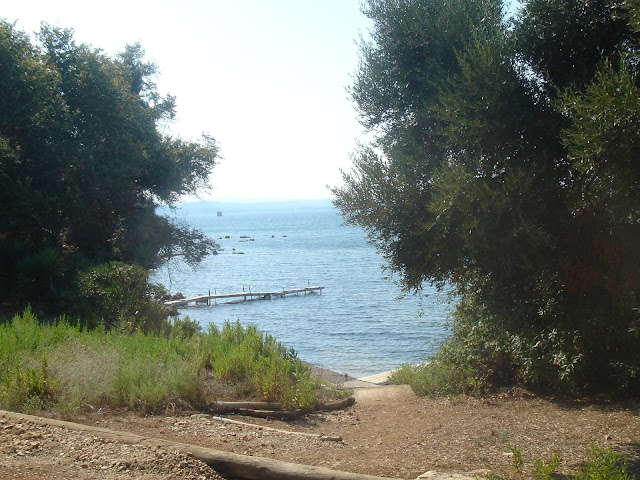 I drew long breaths bobbing gently, awash in the sea, sun piercing my closed eyelids. Later, drying in the breeze, we read until our beach slipped into the shade of overhanging pines. Behind the bar opposite the city an Englishwoman, northeast accent, speaking Greek with ease, remembered us.
“Hullo again” she smiled, serving a cold beer and coke. 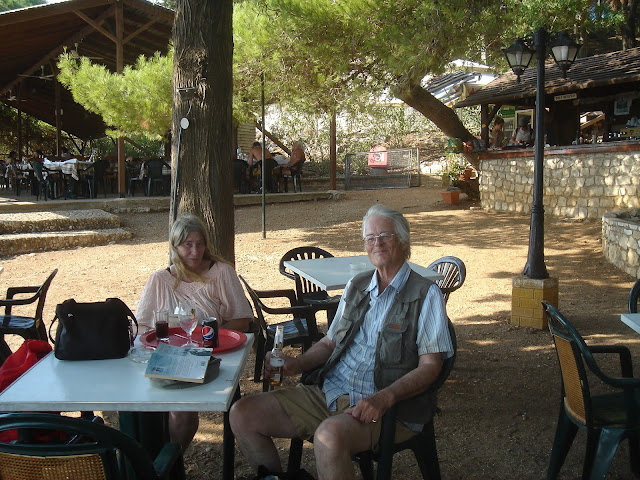 We asat with others among the pink brown trunks of tall pines. Amid sparkling wavelets ships of every size plied back and forth. A cruise liner called sonorously for her passengers’ return from the city. After a while its enormous bulk was slipping soundlessly out to sea. A blot appeared in the dazzling sea, resolving into a shape
“A rowing boat?”
“That’s our ferry” said Lin
“No it isn’t”
“Yes it is. Look”
The silhouette of a wedge had grown into our caique returning with lots of people to land, taking fewer of us back to Corfu.
The next day, Sunday, we rose late.
I get up, empty the bins into a plastic bag, wee in the compost just topped with a swept heap of summer-shed leaves and blackened lemon husks. 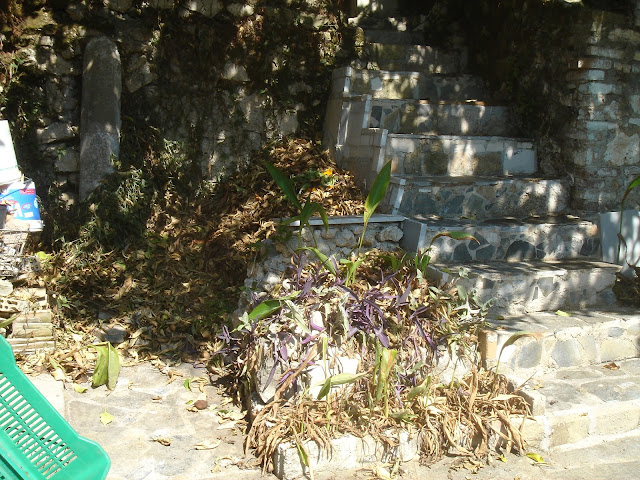 Wasps are everywhere. Their ceaseless buzz has an edge, different from bees “Not one of ours?” We’ve both been stung. After the first pain stings become an itch. Milder than English wasps. I sweep the space under the balcony; play bountiful with the cats that beg at the door, casting them handfuls of dried pet food – comforting routines. I’ve been cutting back wisteria, forever trying to play constricting serpent with our wood balcony; also tall soft-spiked branches of bougainvillea insinuated between the decking. From the public path where it’s piled, with gloved hands I stuff big black plastic sacks with chopped stalks and leaves. Six sacks. I take them to the top of the steps to Democracy Street; collect the car and fill it with green waste to dump in the first empty wheelie bin I find, outside the village beside the Sidari Road.
“Last day we have the car. Let’s go to Mon Repos, to the beach there”
Lin was in a vexed study. Tired out from responsibilities in England. I irritated her. We didn’t speak, driving through town to the Kanoni road, not easy to find, but we know the route so well. Parked by the gates to the palace, we strolled a broad shaded zigzag drive, past the lovely house, and then by a roundabout route, since we’d missed the direct track, we came to a strand deeply covered in dead dry seaweed, absorbing sound. All along a narrow stone jetty, reaching 80 metres out to sea, were Greeks with colourful towels resting on Sunday afternoon; one I saw, stood near the end of the jetty, ample flesh shaking a little. I waited for a resounding splash. She poised herself, splayed feet washed by gentle waves, and entered the water with a perfect dive, supple as a seal, disappearing, surfacing, disappearing, surfacing further than I’d have expected, shaking her wet black hair, diving again, heading seaward where the shores of the mainland stretched south, a hazy outline of flawless blue china. Mother Greece. 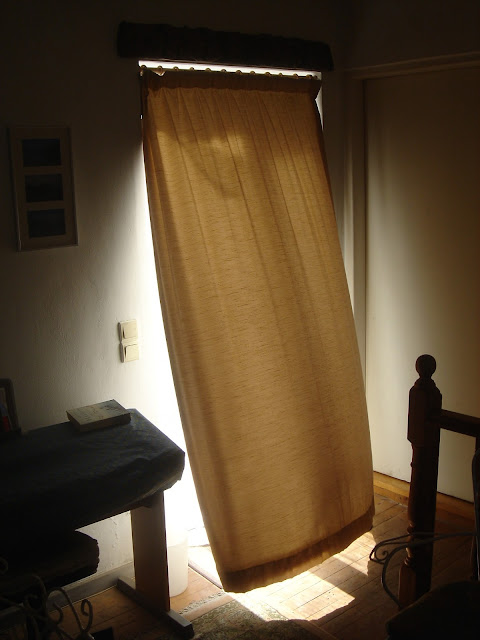 I don’t really like being so hot, but if I move slowly, use the weather as a reason for lying about reading with a cold drink to hand, I come to terms with it.

But now the enveloping heat of August, but not the wasps, has been chased decisively away by two 24 hour intervals of rain, wind, thunder and lightning.
Gabriella, a friend from Rumania rang to ask “Are you alright?”
“Why?”
“Oh my dear, there’s been news of a typhoon in Corfu, flooding and cars washed away.”
"Blimey. So sweet of you to call us. No we’re fine. Just a bit damp.”
I’d read on facebook about someone who’d described flying towards Corfu entering the blanket of cloud that’s been covering the island on a plane full of people frightened, as we would be, by extreme turbulence; how their holiday plane seemed to descend for ever through a tunnel of unbroken cloud rushing by, windows slashed with rain, the interior lit by flashes of lightning, and still no sight of ground – 'some were crying, others screaming now and then' - until the pilot gave up and diverted to Thessaloniki, where passengers were boarded at a local hotel with vouchers for food. This contemporary bout of terror reminded me of how passengers on a 19th century sailing ship, embayed by a sudden shift of wind strength and direction, might be given hours of fear as her crew work to balance weight of sail against risk of losing spas, praying to weather a distant cape. 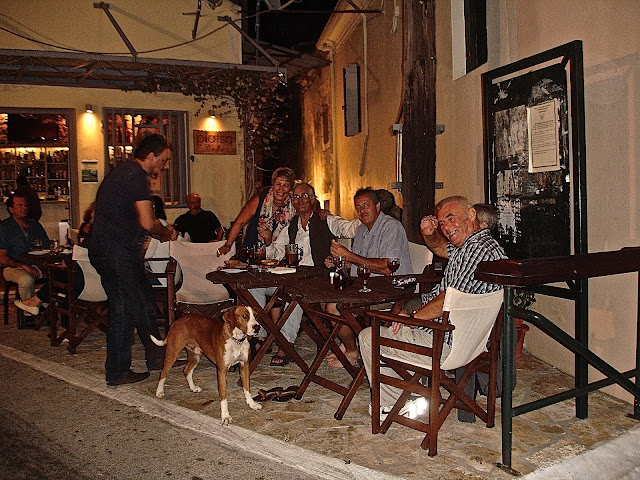 We’ve been at Stamati’s Piatsa, most evenings, less than a minute from our front door. Three years it’s been going, converted from a shop; a small plaka’d triangle right against an especially narrow few yards of the road through the village. I have come to enjoy this unpromising place for a bar.

It’s a small theatre. The wings are east-west along the road that bisects the village, on one side almost invisible, but with the doors and canopy of the baker’s shop and its customers comings and goings glimpsed askance. On the other, a 50 metre stretch of Democracy Street down to the Philharmonia rehearsal and teaching rooms, that disappears round a bend on a slope. Entering left and right we see bicycles, scooters, vans, cars and the municipal refuse truck that passes through at night... 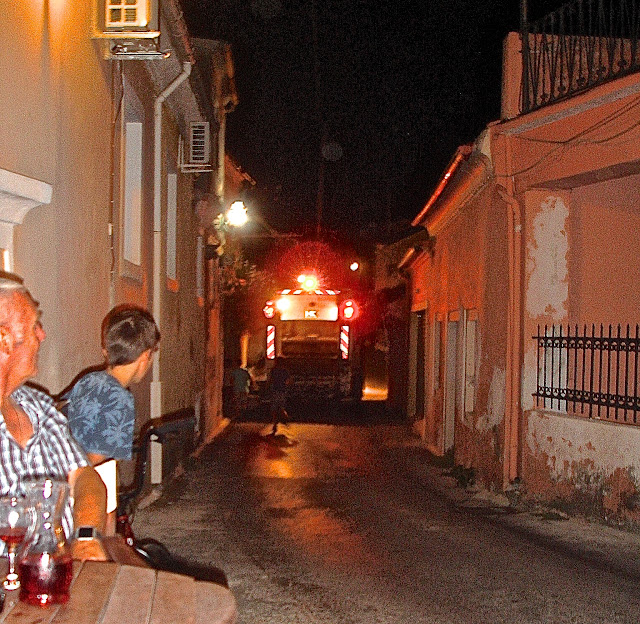 ... men hanging on dashboards front and back, a miasma of rot in their wake. We wave to them and they wave back. Now and then when a parked car narrows the road even more Stamati walks into the street waving directions. Our entertainment includes surmising how vehicles going opposite directions will pass one another. From the bandroom, from time to time, we hear their rehearsal music. Add to this pleasing melange of sounds, the rub-a-dub-dub-dub on some evenings of the lads on their motorbikes.
There are other ways onto the stage; from a Venetian arch over steps just below, from the house opposite – three metres across the street. Dogs and cats are extras, lying insouciant on the patchy tarmac as wheels pass inches from their reclining paws, or barking at something off-stage, or wandering between our feet, being stroked and patted, as we sit at the outside tables.  As in classical drama actual action occurs outside the theatre, retold and discussed by us as anecdotes, tales, opinions, judgements.

I doubt Aristeidis Metallinos would charge us with being ‘the snails of the village’? Do we gossip? Yes but we also debate and discuss and laugh a lot.
“Socrates asked three questions of an informant” I was told the other day by Yani Metallinou – that 'M' name traditionally diffused throughout Ano Korakiana - and one who recalls, as a ten year old, seeing the laic sculptor at work, rhythmically chipping at stone and marble.
“First question. Is it good news? Second. Is it true? Third. Is it helpful? If not ‘yes’ to all three, say 'no more'"
Above our theatre, but below the sky and the Trompetta crags that tower over our village, there’s the next floor of the surrounding houses with doors, french windows, shutters, a balcony. Perfect for hanging out washing and enacting a conversation with those below, Juliet to Romeo.  From May to July, even early August, swallows nest and raise their young in niches all around, adding their chatter to the sounds of children – playing football, skateboarding, cycling – easily moving out of the way of vehicles. The other night, as happens now and then, Stamati organised music, sardines, souvlakia. Two musicians – an old man and young man, son of a neighbour, played for four hours almost without a break, keyboard, guitar, for a while, bouzouki. People danced – Zebetiko - and sang – "laiki musiki" - seeming to know all the words and tunes.


*Translation: 'When the village’s snails are alone they sit and boast about their big horns. But when somebody comes up to them they try to hide their horns, one behind the other, between their legs'

*** *** ***
My goodness! A leap in time. Bignells Cottage in Itchen Abbas. My half sister, Oriana, sent me this picture the other day - a watercolour by my great-aunt Florence Apperley, who I called Auntie Flo.

She painted the cottage in September 1940 - at the height of the Battle of Britain, this thatched house belonged to my great grandmother Lucy Halkett, with whom I spent much time as a small child. She taught me to read. I am unsure when Gaga (my name for her) bought this lovely place. I believe she sold it in 1949. I was born in 1942. Born in another thatched cottage on the other side of England, I spent part of my earliest childhood at Bignalls, on my own and with my sister, Bay, 18 months younger. The house stood next to an avenue of lime trees that led down a gentle slope to the River Itchen. My room, my nursery, is the upstairs window on the far left. The next two upstairs windows were to Gaga's bedroom. Early on summer mornings, as I recall 70 years later, I would get out of bed and climb into hers. She'd start reading to me, teaching me letters and words as a story proceeded. I recall the first of many classical tales - that of Baucis and Philemon. In her 70s then she could complete the Times x-word in half an hour. Later in her 90s she complained of her mind going "It takes me an hour" she grumbled. In 1969, she died in her sleep at 99, after heading upstairs with her usual nightcap of malt whisky. About six years ago I was in Winchester for work. I found a few hours to cycle out to Itchen Abbas and catch a glimpse of Bignell's Cottage and stroll beside the Itchen in whose crystal water I saw brown trout through the reflection of my face as I gazed down from a low bridge hardly two feet above the river.
Posted by sibadd