Daffodils and crocuses. There's still no snow, hardly even frost; instead warm gales from the Atlantic blowing things over, and more and more rain...
...until today. Yesterday I continued splitting logs with a spalthammer, using a chain saw to reduce the  size of larger pieces of wood, knots holding the wood together, resisting, while others give way with a satisfying thud, each piece thrown sideways; picked up and split again. The stack grows. 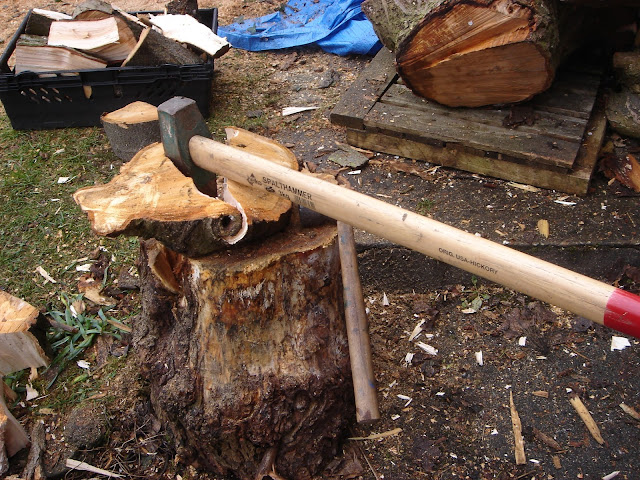 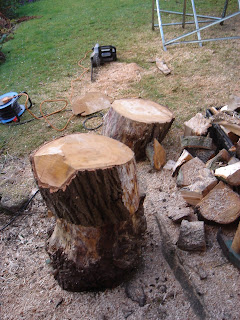 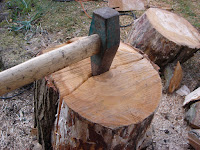 It seems wrong rather than a promise of spring that there's already blossom on the cherry in our front garden... 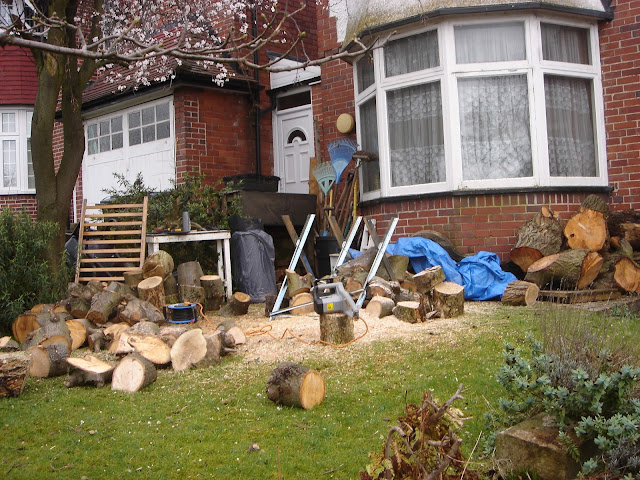 ...It seems to be hurrying me. reminding me of having done too little work on my allotment...


...on my other projects - Out of Town 'Restored to Life'....for which I have cash to spare, for work with Francis and Frazer, after an out of court payment from Kaleidoscope TV, who, last year, so signally failed to fulfil their side of the contract I made with them in early 2015. Extract from my 'letter before action':


My claim is based on a failure by Kaleidoscope TV Ltd to repay me in kind for goods and services they have received from me – this includes the loan of films to broadcast, the broadcasting of my films more than once, contrary to contract, and numerous failures to broadcast, contrary to contract, commercials for published episodes of my films. I own rights in broadcast quality episodes of TV films by my late stepfather, Jack Hargreaves’ – ‘Out of Town’ (OOT) programmes. In February 2015 I loaned DVDs and Digibeta cassettes of these programmes to the local TV company, Kaleidoscope (a.k.a Big Centre TV) to broadcast. At the same time, and in return for allowing the broadcast of these programmes, Kaleidoscope TV Ltd agreed that they would undertake the restoration, to broadcast quality, of at least 30 episodes of OOT in the form of 16mm film and sound-tape – ‘Jack Hargreaves OOT Archive’ – that are stored at my home, as well as airing commercials advertising published DVDs of ‘Out of Town’. The broadcast quality OOT material that I had loaned to Kaleidoscope were broadcast during 2015, but over the last year Kaleidoscope TV have done no work on the film and tape they had agreed to process. The defendant has had DVDs and Digibeta tapes from me to broadcast twice a week on Big Centre TV over 6 months for free, but have not fulfilled their agreement to process my raw material in return...


...and Handsworth Handsworth Helping Hands '4 Avenues Project', learning more almost by the day on a tiny part of Handsworth...
...and Black Patch Park where the fly-tipping grows; where we need a bold idea to recreate a place in what's become a border space, urban limbo.
This park we've been concerned about for over 14 years - can it be so long? - is a community of interest, those interested in it (Charlie Chaplin, Gypsies, Soho Foundry, football) dispersed. It needs for its future to be also a community of place: for that it needs - close to it - people whose windows and doors open onto the Black Patch. Sandwell MBC's structure plan for the area has the area zoned to prefer light industry. What would it take it to  have the area re-zoned for housing?
The other project, shared with Linda, Richard and Angeliki is the idea of a website for the work of Aristeidis Metallinos, the laic sculptor of Ano Korakiana. We've done as much as can be done on this until we have the agreement of the sculptor's daughter, Maria, to continue...
These last 9 days Arthur, my father-in-law, has been staying with us, going every day with Linda to Stafford Hospital - 26 miles north - to visit Dorothy, my mother-in-law, who fell in her home, broke her wrist, and now struggles to move about. We await a place in a rehabilitation unit close to Handsworth. It's difficult for Lin, so occupied now with the care of her parents. I'm almost peripheral.
I fear the news at times. Not from newspapers. I stopped reading them except as comics years ago, but from the news I select from broad choices on the internet from Australia to the US, Canada to Greece, S.America, China and the rest of Europe - sifting the over opinionated, seeking wise writing. Right now I'm thinking about the New Hampshire Primaries. I wrote to my friend, Tony, in New England. With Helen he visited us in Greece five years ago. I'd not seen him since I was a young man in Philadelphia, working briefly in the Wharton School at the University of Pennsylvania in 1966..


Dear Tony and Helen. I imagine your woods lovely, dark and deep amid the snow we seldom see here. I think of you both regularly and wonder how you are. And how the world looks from New England.  We don’t go back to Corfu until the second week of April. Greece seems too far away, but I am now and then assailed, almost assaulted, by news from the rest of the world. One friend’s Christmas greeting included the impression that we live in times that imitate the start of the first world war.
We are enjoying writing on the tabula rasa’s of two grandchildren - Oliver (coming up 4) and Hannah (2). They’ve already been three times to stay with us in Corfu, Here in Birmingham I’m entrusted with explaining to Ollie the world of growing vegetables,...

..walking beside canals, riding on trams and trains and ascending top front of double-decker buses drawing pictures in the condensation on the big windows, ... 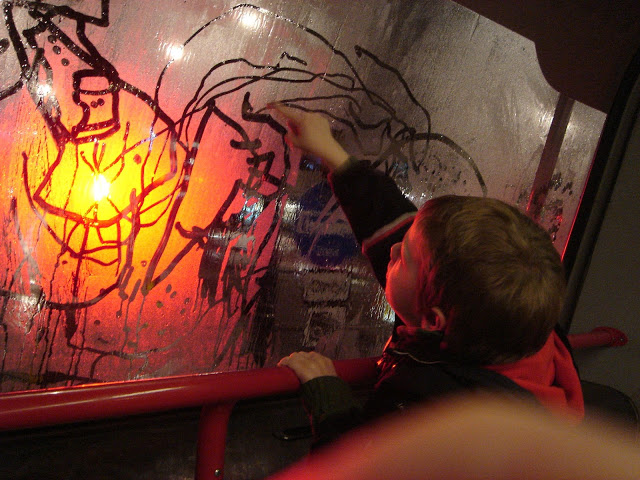 ...visiting art galleries where, for a child, everything from a floor pattern, banister or a reception counter is as true a work of art as paintings in frames and sculptures on pedestals...

...not to mention the  ‘installations’ you aren’t supposed to touch. All part of of 'every common sight…apparell'd in celestial light…the glory and the freshness of a dream. Meantime we’re also busy with care of Lin’s parents - 91 and 97.


They looked after us once. Lin sends her love. We both hope you and your family are well. X

T replied with a happy group photo of his descendants amid American snow...


Dear Simon, Here is a photo  of our family minus O who's currently working for the International Medical Corp (IMC is like Médecins Sans Frontières) H and I are nervous about that but she loves it... we are going over to visit her in late May (not in ... but in Jordan!) As you can see, we are blessed amid all the misfortunes of others.  Snow?  Alas until (literally) as I began to reply to your email we had NONE.  Now it is snowing—we have about 4” on the ground.  We only expect about another 3” but still it is lovely that our climate still knows how to make snow.  We thought it had forgotten how!!!  Now the woods are dark and silent. Lovely. The world from New England?  We are biting our nails to see what the New Hampshire Primary election will bring tomorrow.  Trump is a buffoon and bully but I think he may have over-reached.  I think he would be easier to defeat in November than Ted Cruz or Marco Rubio.  It would be awful if we got any of them as President! Cruz with his fanatical religiosity really scares me. As Europe learned in the 30 years’ war, church and state don’t mix. ....


However, no one is very enthusiastic about Hillary so she might just be defeatable by a Cruz or Rubio.  Analytical arguments by HC just won’t appeal to peoples’ heart strings.  Myself, I am a Bernie Sanders supporter but think it will be very hard for him to beat Hillary in the primaries with all her “experience”.  Bernie has a very agile mind. I used to see him in Vermont when I lived there.  That agility will make up for his alleged lack of experience.
WWI:  Your friend’s thought about the prelude to WWI has passed my mind too.

There are just so many accidental mistakes or misunderstandings that could easily happen and trip off a worldwide conflagration.  Ironic isn’t it in the context of your friend’s thought that the current instability in the Middle East is an outgrowth of the fall of the Ottoman empire in WWI followed by the imposition of the Sykes-Picot agreement by the British and French carving up the region between themselves.

Greece?  I was going to email you and ask how Corfu is doing.  I gather it is  relatively unscathed but the migrant flood but poor Greece.  There it is with an enormous economic recession resulting from Germany’s hard money policies and the rest of the EU doesn’t seem to be lifting a finger to help Greece cope with the flood of refugees on to Lesbos.  The EU could at least write off Greece’s debt. Of course the US is pathetic having only taken in 2,800 refugees in the last year.
Congratulations on your two grandchildren and the clear sense of renewed wonder they are conveying to you and Lin.  Our’s, as you can see, are a bit older but as wondrous and real companions now they are adults. We jaded old folks need to open our minds as you both are evidently doing. I am embarked (barely) on a short book in the form of a letter to my grandchildren about what an incredible experience it has been to be alive at our particular time in history.  Think of it: from cosmology....

....to genetic engineering, to plate tectonics , the internet, etc, etc.  It is truly unlike any other time in human history save (maybe) during development of agriculture  beginning 12,000 years ago. The expansion of human consciousness in our lives is unprecedented.  And most of it is due the recognition since the 1700s that human knowledge is intrinsically fallible.  But of course, even with all the opportunities it is a very dangerous time. (see above and WWI) because so many people are frightened of the enormous changes and frightened of the human responsibility for knowledge and its application. So they are recoiling and striking back like the jihadists or the Christian right in the US.
It is so hard seeing one’s parents reach the end.  I hope Lin’s parents are having some fun and laughs out of these remaining moments. It is also hard on Lin and you as I discovered when my mother reached this stage. It can be quite startling. Suddenly you can no longer ask them (your parents) for verification of “what happened when—“  No you can’t—do what has been your resource for your entire life. Now you are the latitude and longitude by which your children and grandchildren position themselves. They come to you.  Best wishes, Lin, for many poignant moments to share with your parents.
I must go now to watch BBC America.  It was wonderful to get your email and glad to hear you both are doing well as are we. Helen is still working part-time at the hospital primarily encouraging mothers with breastfeeding help. I just turned 76!  Life’s a bit more uncertain now - to recollect Andrew Marvell’s thought “Had we but time enough, this coyness madam would be no crime.  But at my back I seem to hear time’s winged chariot hurrying near.” Otherwise AOK with time enough to enjoy this marvelous landscape and house.  Rather like the Temple at Bassae. 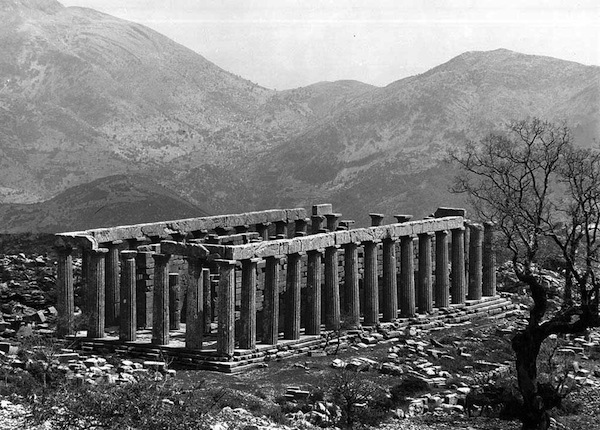 Much love and best wishes for this year to you both. T & H


*** *** ***
The earth is so damp I'm reluctant to plant anything, for all the advice on radio and internet about what should be in the earth during January and February. Where I plan to site the greenhouse on my allotment is the bed in which for two years I've grown Jerusalem Artichokes. I've started digging them up. 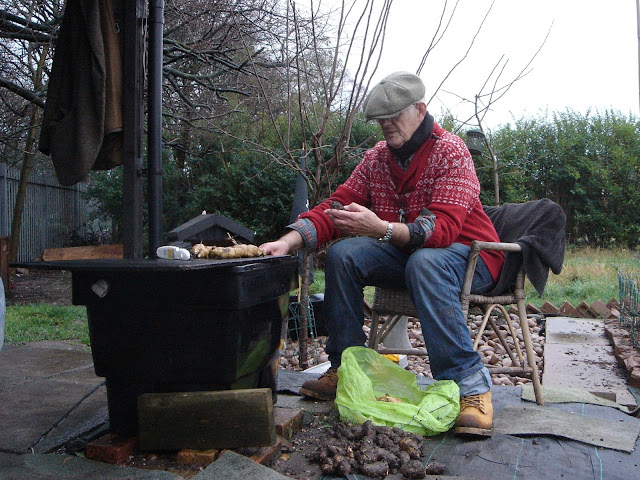 I delight in the journey of these mucky clay-sticky Jerusalem artichoke tubers forked from the sodden soil of my allotment, washed in a chilly waterbutt, taken home, peeled, chopped, parboiled, drained and sautéed in butter with a dash of minced garlic, bay leaves, white wine vinegar. 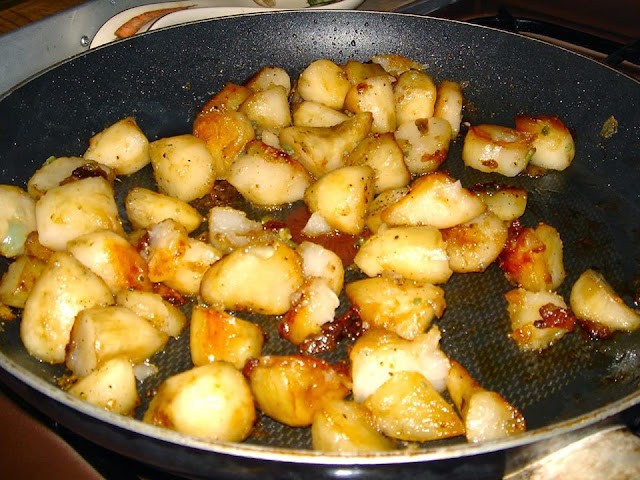