We've removed from the kitchen in Handsworth a fully functioning 66k Parkray coke stove and boiler - over 45 years old - and replaced it with a new 5k inset wood stove. We seldom used the old stove. Coke or smokeless coal is dear. A gas boiler already heats our radiators and water. We spend most of the time, when in the house, in the kitchen, so use gas only to heat water for showers and washing up.
Dermott arrived to drain and seal the water pipes to the hot water tank and remove the old stove;... 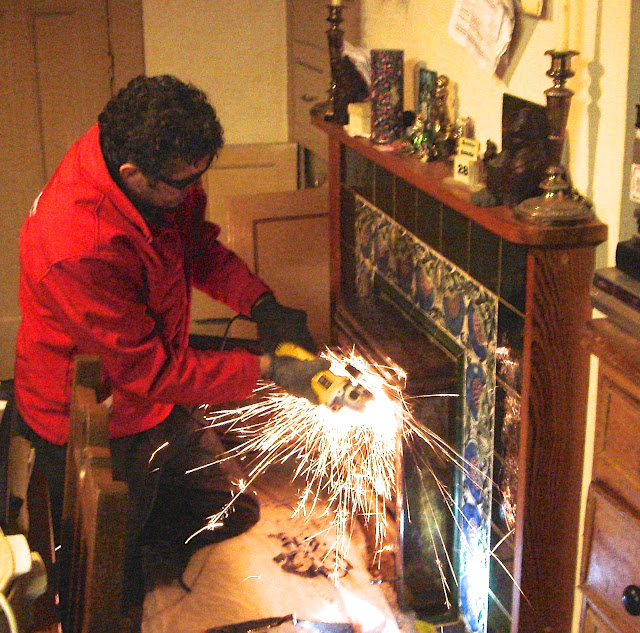 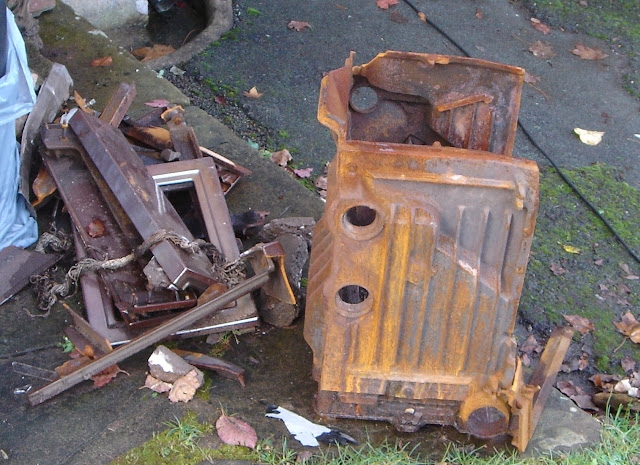 ...taking care not to damage our friend Martin's tile fireplace surround. Tony Cash, Heating Equipment Testing and Approvals Scheme (HETAS) accredited, arrived to assess the site, giving advice. Lin found the stove we wanted at a bargain price on Preloved - an end of line wood stove costing £400 instead of its successor retailing at £1100. We drove up to Wellington to buy it from a private dealer specialising in Charlton & Jenrick Stoves - 60kilos loaded in the back of the car, unloaded into our garage to await Tony Cash, who arrived a week later, with mate Steve, to refine the space, line the chimney, insert the stove, test it for smoke leakage, light it briefly and leave instructions on running it in over the next three days.
At last having gathered some dry wood I let the stove work. I'd just been taught about 'top-down firelighting'. Never heard of it before. You put a couple of heavy logs in the base of the fire, slightly smaller logs on top of them, and on top a small criss-cross of kindling, with a firelighter in the middle. Light and watch.

Quite amazing that in all these years of owning wood stoves in other places I have never learned about this method. A good draw from the chimney and really dry wood, but no need for paper, cardboard etc. It was so counter-intuitive until I saw it work. I've now used the method three times and will never again go through the 'normal' bottom-up routine I learned in childhood, of starting with screwed up paper, then cardboard, then kindling, then small logs....with all the time and initial smoke involved. 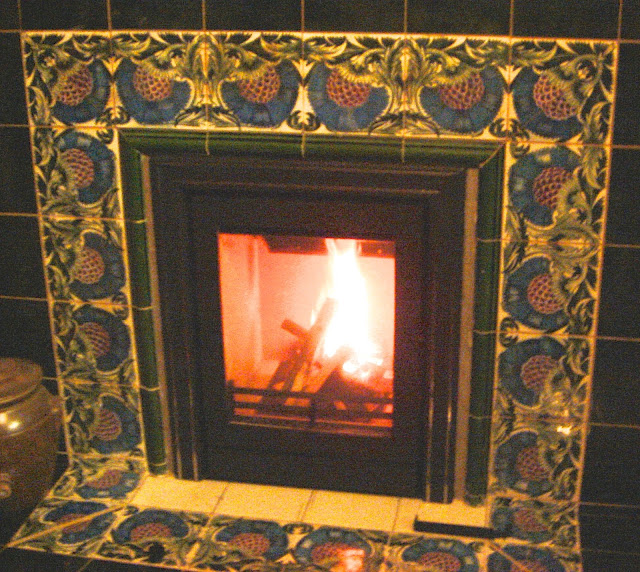 *** *** ***
Oliver's in his fourth year, becoming intensely aware of Christmas. I'm beginning to ready our tree... 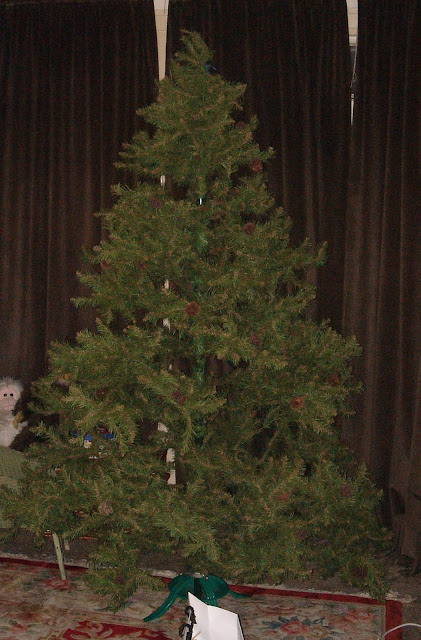 ...bringing three sections down from storage on our garage beams - a top-of-the-range fake tree Lin bought at discount from Rackhams over twenty years ago. Dorothy, my Greek half-sister, gave us an Advent Calendar about the same time.

Oliver helped begin dressing the tree - hanging decorations on the lower branches. I finished it, and laid presents beneath it 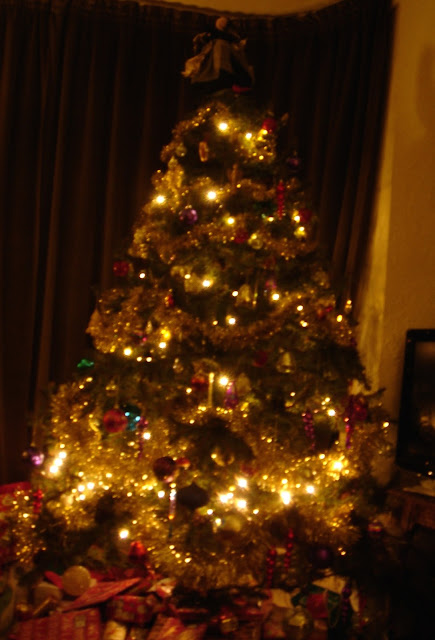 
The soil on plot 14 is so damp after a month of wet windy warm-for-winter weather. I'd forgotten the extra weight of wind in the winter when Winnie and I put up the fruit net in early September. 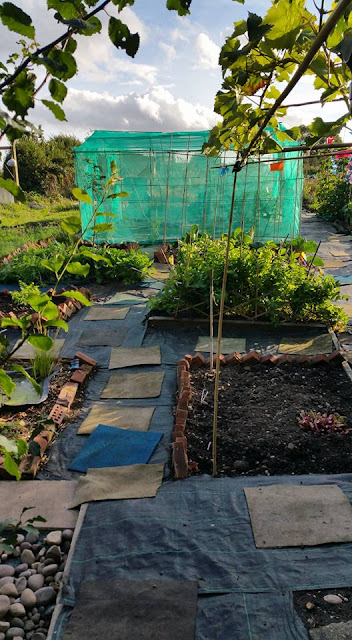 Even before the stronger winds of Abigail swept across the Victoria Jubilee, a south-westerly blow picked up our careful construction and collapsed it. Wholly unsurprising, but a reminder of how difficult it is to be mindful of winter during summer. Winnie said she and her dad had been on the plot tussling with the structure trying to hold it down - to no avail. 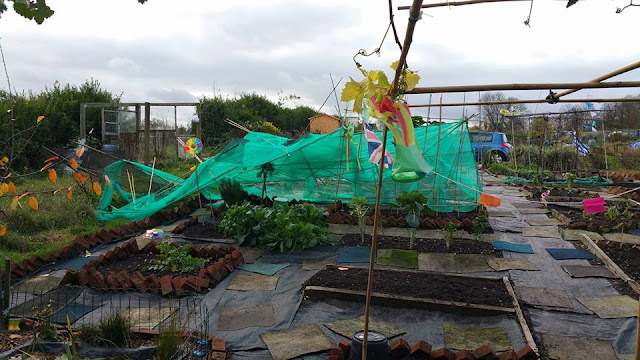 The same wind picked up and left flattened two sheds, an aluminium greenhouse, ... 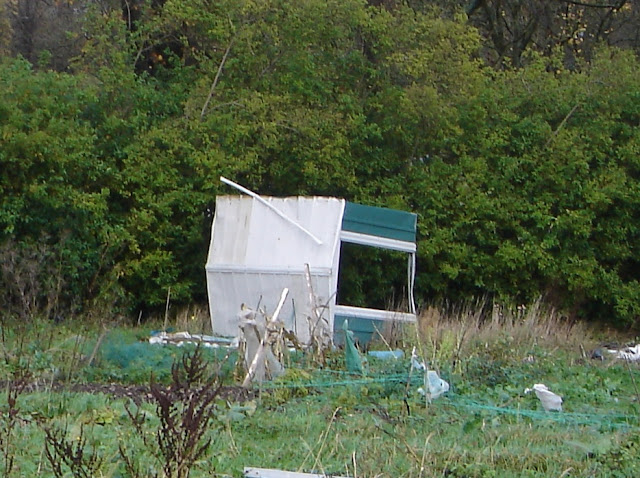 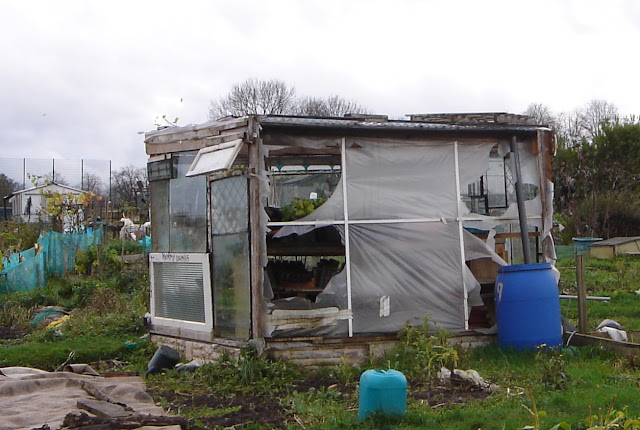 ...ripping out the transparent polythene sheet windows of my neighbour's home-made wood greenhouse.
"Right!" I said to Winnie 'The next one will be a lot stronger"
"Yes!" 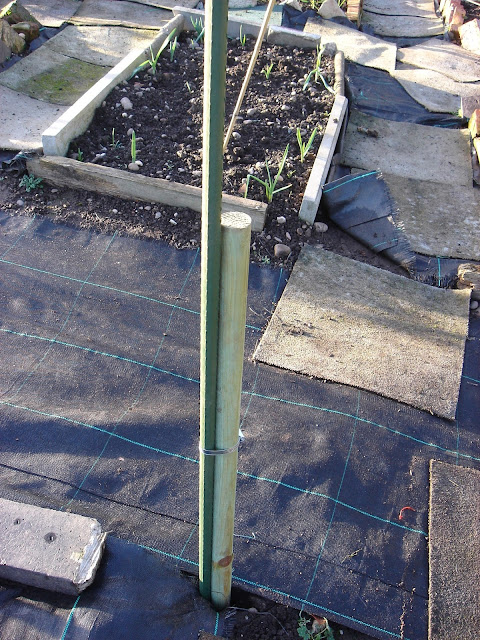 We start with 20 tanalised stakes driven half their length into the ground to which, with two jubilee clips, I attach uprights - 8 of which are metal core plastic covered tree supports - 8 feet high. All other uprights are doubled or even tripled up... 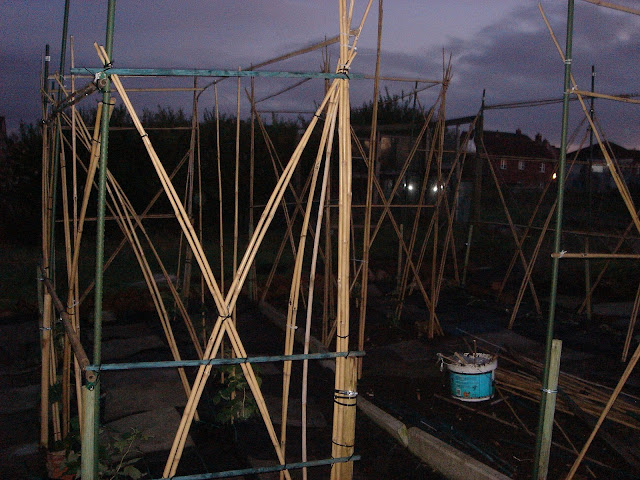 ......yet we've kept the character of the first cage.
"It's like something from Tenko" said Winnie's aunt Denise. 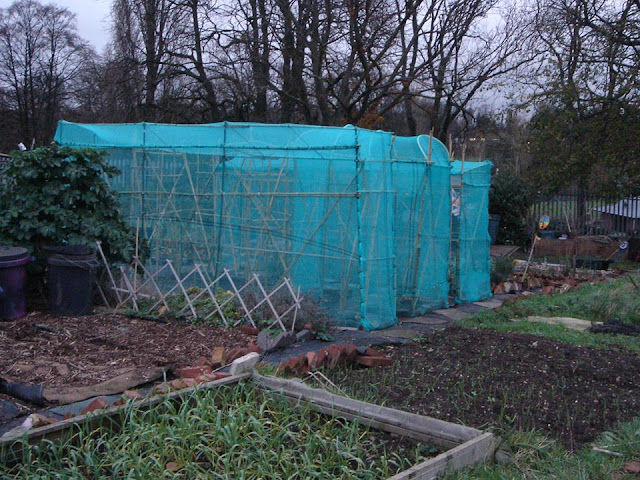 If I have a greenhouse it will have to be sturdily built on sturdy foundations - as I hope is the case for fruit cage mark 2.
Posted by sibadd