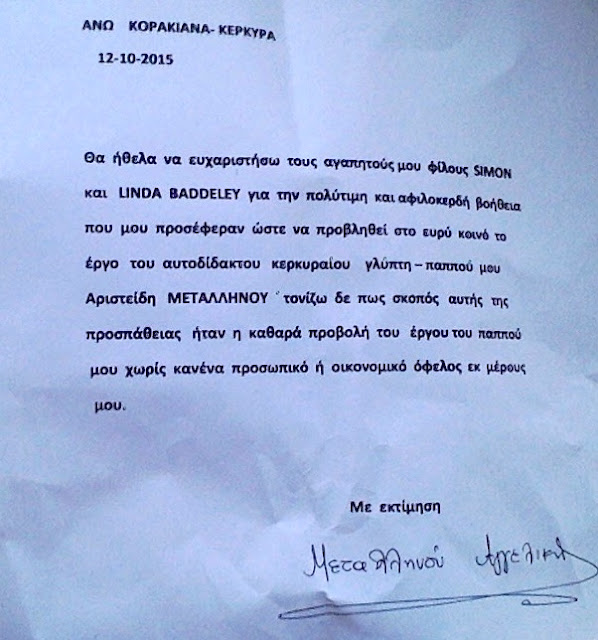 ANO KORAKIANA – CORFU
10.12.15
I would like to thank my dear friends SIMON and LINDA BADDELEY for the valuable and disinterested* assistance they have given me in bringing to public notice the works of the self-taught Corfiot sculptor, my grandfather, Aristeidis Metallinos. At the same time I would like to emphasise that the project to make my grandfather better known is conducted with no wish on my part for personal or financial gain.
Signed
Angeliki Metallinou
Αγγελική Μεταλληνού

*Disinterested doesn't mean 'uninterested'. The literal translation of 'αφιλοκερδή' is 'non-profit' but that looked a little awkward.


Dear Richard. I’m sitting in a hotel room in Regina, Saskatchewan, having just reached the end of your book – and having just read the excellent review and interview you shared. I must heartily congratulate you on your achievement! Greece Through Irish Eyes is remarkable – learned, eminently readable and, most importantly, true. It really should be required reading for anyone who spends time in Greece or claims some experience of the place. I very much enjoyed the way you traced the triumphs and crises of the country back to its formation so convincingly and you have given me a picture of Greece’s relationship with the troika that I did not have before. Like you, I love the place even though it often exasperates and dismays me, and I mourn the village life...

...that seemed so much more robust and complete when I first encountered it at the end of the 1970s. I think you have found a perfect position from which to provide perspectives into the past and also to observe Greece’s contemporary place in Europe. You have filled in many shameful gaps in my knowledge of modern Greek culture and formed a fascinating net of connections that really do build up into a structure of understanding. You have also left me wishing I knew more of Irish politics, hinting at parallels that I must now try to follow up, to understand the allusions properly.
I do hope someone is going to translate this into Greek so that our friends there can read what you have to say about them. Perhaps they will be surprised that a xenos can have such a sensitive and multi-dimensional view of their Greekness and the current predicaments they face in Europe and in themselves.
I agree with your reviewer about the status of this book – it is the one to read first, pulling no punches and refusing to oversimplify. Did I mention it was also a pleasure to read – seasoned with just the right amount of wry wit and profiting no end from your own inclusion as a character in the narrative.
Thank you for writing it! It deserves a much broader success than the obvious constituencies of Irish and Greek readers will give it. All the best...