I’ve just hung out a tub of washing in the garden. I find this more satisfying than, as in Scotland, shoving spun-dried washing into a tumble dryer for forty minutes or hanging things on the washing rack strung on ropes and pulleys in our cramped boiler room in Birmingham. I so enjoy seeing the suspended clothes, dish clothes and towels swinging gently, sometimes frantically, under the sun in a sea breeze. It’s very seldom warm and dry enough to do the same in Handsworth – though I have a line hung hopefully between fence posts across our lawn there.
Yesterday I cycled into town about 15 kilometres - easy enough. Indeed a pleasure. Coming back i dealt with the ascent to Ano Korakiana by cycling, but also walking on gravel lanes along the valley from the sea at Ipsos up to the village. 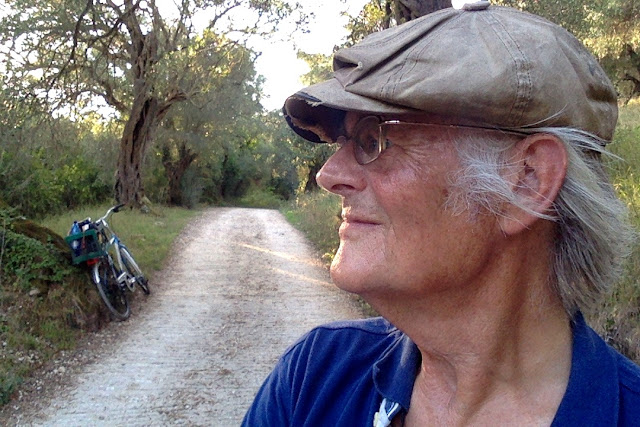 So Valerie’s been with us three weeks. In that time we’ve been tourists, taking her to places on the island, driving on many country lanes edged by cyclamen, and olive groves above and below; to the Achilleon...

...to Kaiser’s Throne above Pelekas. with its superlative views of suburban Corfu... 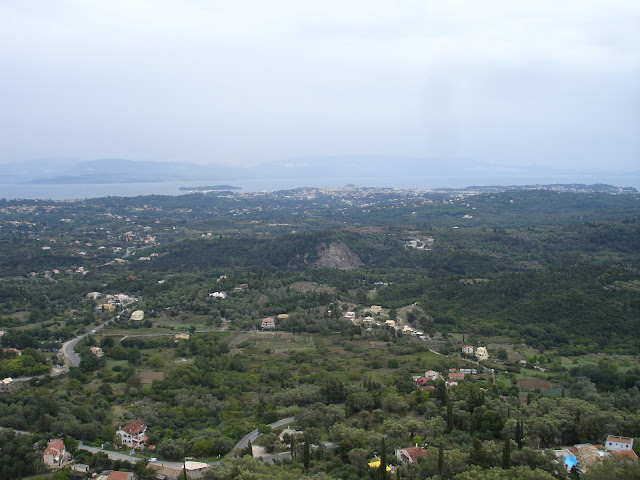 ...to the quiet shore at Agnos to paddle and sunbathe and read for several hours, to Domino’s in Anilipsi to swim in their pool and lounge on their lawn, and do the same at two pool bars in Paleokastritsa, to drink in a bar at the ‘little England’ of Sidari...

...to the island’s highest point on the vertiginous summit of mount Pantokrator gazing over to Saranda, Butrinti and the Albanian peaks beyond the narrow Corfu Straits.... 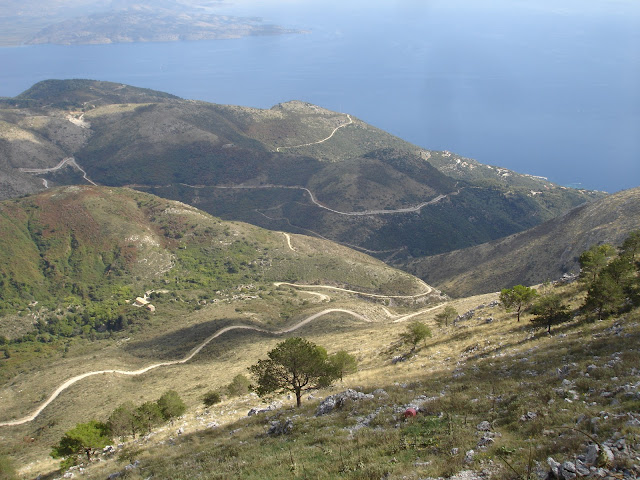 ...up the twenty-nine hairpin bend road above our village, stopping to visit the tiny church of St Isadoras... 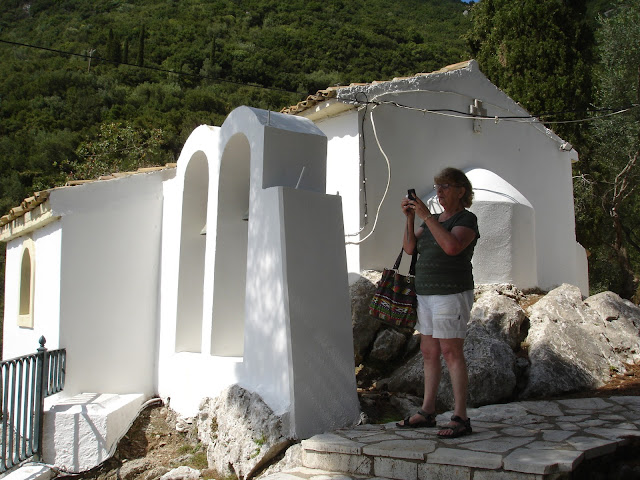 ....before ascending to the panoramic outlook of Sokraki Villas sitting by their horizon pool surveying the island as far as the eye could see...

...to Emily’s in the Platea of Sokraki for drinks and snacks, giros amid pouring rain under a vine lined roof at George’s in Kontokali, supper at Strapunto on the road to Kato Korakiana, and, with Mark and his brother-in-law Paul and sister Michelle, at Elizabeth’s in Dukades, several times to Emeral near Tzavros for ice cream, to enjoy a curry evening on our friend Sally’s balcony in the village; to Corfu town to stroll and eat, to Kalami, to sea-front snacks under a large umbrella at Kassiopi (where I've been told by the manager at Plous Bookshop a diligent ex-schoolmaster drummed up some of the votes Corfu's electors have given the new Golden Dawn MP, Ioannis Aivatidis in the Sept 20th General Election); to the beach at Dassia – usually tranquil – where warm southerly gusts brought breaking waves and pouring rain; on the last ferry of the summer to Vido island for a swim and meal....

...to the quiet English Cemetery half a kilometre from San Rocco Square, centre of the new town; to the resort of Agios Gordis below the high cliffs of the west coast to look at shops and flocks of sun loungers spread on an end-of-season beach; to Kanoni to watch planes landing and taking off, by small boat from Vlacherna jetty to visit Pontikonisi and, near the end of Val’s stay, coffee and cake at the village’s new café Crescendo and a generously offered opportunity from the artist’s family to see the sculptures of AristeidisMetallinos in the closed museum* of our village, and on several occasions a relaxed drink at the village ‘pub’ - Stammati’s Piatsa thirty yards from our house and to have supper with friends Stephanie and Wesley at home, and to lounge now and then on our balcony.
****
*At the family's request I've written what I hope is a gentle letter to Corfu Mountain Bikes' owners to explain why it is so difficult to get to see the sculptures in the Museum in Ano Korakiana:

Dear Kostas and Hans
THE ARISTEIDIS METALLINOS MUSEUM IN ANO KORAKIANA
I wonder if I can ask you to mention, when you are visiting Ano Korakiana with your guests and come to the Aristeidis Metallinos Museum, that although the place is, very sadly, not open to visitors, and has not been for many years, my family are, with the support of the Metallinos family, creating a website catalogue of professional photos of all 250 of the laic sculptor's works.
We hope to have this up and running in 2016, so that anyone interested can view the work of Aristeidis Metallinos on the internet, and perhaps through their smart phones even while they are in the village.
The family have recognised that through talking about the village sculptor on my blog Democracy Street I may inadvertently have raised expectations that visitors can get to see inside the museum.This is simply not possible.
I spoke briefly to ‘Napoleon’ a few days ago (when he was in the village with a group of visitors) and explained in more detail why it has proved impossible to open the museum to visitors, asking that Corfu Mountainbike Shop Guides do not call on the family at the museum. They are troubled and embarrassed at having to explain their reasons for having to refuse entry to their father’s/grandfather’s museum.
Aristeidis Metallinos is a most interesting man and we understand how even a glimpse from outside the house might make people who have heard about the artist, want to have a look inside the building that houses his work.
These are the wikipedia articles - in English and Greek - I have so far posted about the village sculptor. We hope to make more information available in the next year. The family greatly value your understanding in this matter, and I know the village greatly welcomes your guided visits to Ano Korakiana. Kindest regards,
Simon....Σάïμον και Λίντα Μπάντλεϊ, Οδός Δημοκρατίας

*** *** ***
It was a dream from which I awoke gripped by happy astonishment, knowing that, awake, I could not command the language to describe what my slumbering imagination had conjured. Near the end I was looking down at a young director – or so he or she seemed to me. Others had been ahead of me speaking to this small modest dynamo. I looked down into his - or her - eyes breathless, choked with the joy of what I’d been watching
“You made magic come alive. Thank you”
I hugged the delicate figure gently and was looked up at with compassion.
She/he was, seeing my tears dropping so copiously she/he touched and held my arms gently, and said something I could not hear, in an accented voice, that seemed to be consoling
“No no” I said “You have made me so happy”
Awake it struck me that if in the liminal state of dreaming I could invent a performance so astounding, so grippingly beautiful, if the visions came from inside my head, things I had never seen in my life inside or outside of art, fiction, cinema, or show, yet drawing on visions and fictions and that I could reference to what my eyes and ears have seen and read and heard in 70 years, then were I as talented awake I could do and invent anything.
Perhaps I was weeping in less than happiness. Perhaps I was weeping as the newborn cries – in folk tale – as it enters the world from paradise, or weeping for not being gifted. Proust said writing entails working in a dream-state, knowing you’re awake, but stopping yourself from waking. What I saw in my dream had the charisma of ‘Revelations’, the last book, the detail of all Bosch and Breughel, the spectacle of Cirque du Soleil (tho' they don't work with the animals I saw) and music that gripped my insides as though it had entered my chest other than through my ears, so also what I saw seemed to have gone straight to my brain through more senses than sight.
We were assembled in a large hall, high as the knave of Winchester, yet more like a marquee, wholly coloured the blue of a cloudless sky before dusk. Various performers were exercising in costume on a variety of spirited horses of glistening fitness amid a crowd assembled in knots across the vast floor lit from invisible sources. Who was there? Perhaps everybody in six degrees of separation. I had no worry with thinking ‘we’ were to see a preview, which in waking memory was the moment I entered my dream.  Useless to describe the moment when a performer of a sudden begins their performance, rather than limbering up or rehearsing since we were both behind the scene yet in its midst. Somehow several horses had climbed on the backs, unfazed by ungainly hooves, of two more horses, then two or three more, making one great horse on which a rider sat towering above us, the illusion screened by an immense and richly coloured tapestry flowing in undulating folds to the floor, while from one end of this caparison appeared a head larger than any of the many horses beneath the lovely robe and, at the other end, a tail of similar magnificence, both seeming alive but somehow composed of parts of smaller horses and, perhaps, people in skillfully contorted disguise. This towering breathing masquerade, imitating the fluid movement of a single animal, processed gracefully to the end of the hall infused and enveloped by music in complement to the vision, to meet another artifice as high and vast as the other. The single horse which we knew to be made up of many horses greeted its twin beneath an apse at the apex of the hall. From its head sprang a smaller horse that seemed ridden by a cherub lit with bright lights that no more dazzled than the music deafened. The audience gasped in admiration. The scene was celestial. I looked up in delighted awe as the horses disassembled and performed an impossible aerial ballet of delicate harmony with all of us and one another as the light softened to a deeper dusk and left everything for a while in semi-darkness as the performance ended – hardly a minute for all my dream-sense of time suspended.  Still asleep I was entranced beyond any accessible expression. I awoke happy but slightly embarrassed. I’d been trying to hear what the director had been saying to me that I couldn’t catch and had moved with them to a door near the end of the hall which opened to reveal the busy interior of the women’s changing room into which I’d been trying to continue my attempts at conversation. I retreated with apologies and woke up.
Posted by sibadd