In Ano Korakiana, and every village across the land, edges of roads and steps and paths are being whitewashed, verges tidied, surfaces swept as Easter comes closer. Fortis and his son Lefteris set to with bucket and brushes this morning, doing edges by our home as well as theirs. From the 12.15 city to village bus I glimpsed his back – an older man in a wide hat walking near the centre of the road below the village. The driver used his horn. The figure moved a pace to the left without turning; absorbed. Andreas Metallinos on one of his regular walks – βόλτες του – a slight stoop and a walking stick, coming from his daughter’s home – which he built - just outside the village. Angeliki, grand-daughter of Aristeidis Metallinos, has set aside an hour a day from Tuesday to Saturday in the week after Easter to create a catalogue of the laic sculptor’s works. I couldn’t be more pleased at this step toward making the village sculptor better known. She suggested this over coffee at Crescendo - next door to the sculptor’s museum; told her I’m responding to a request for a picture of one of the artist's works as an illustration in Richard Pine’s latest book – this one about Greece from an Irish perspective. Tassos took photos of all 250 pieces in the museum but the one which Richard’s suggested to his publisher isn’t clear enough. With the family’s permission I arranged for Rob Groove, a professional and a friend, to visit the museum. 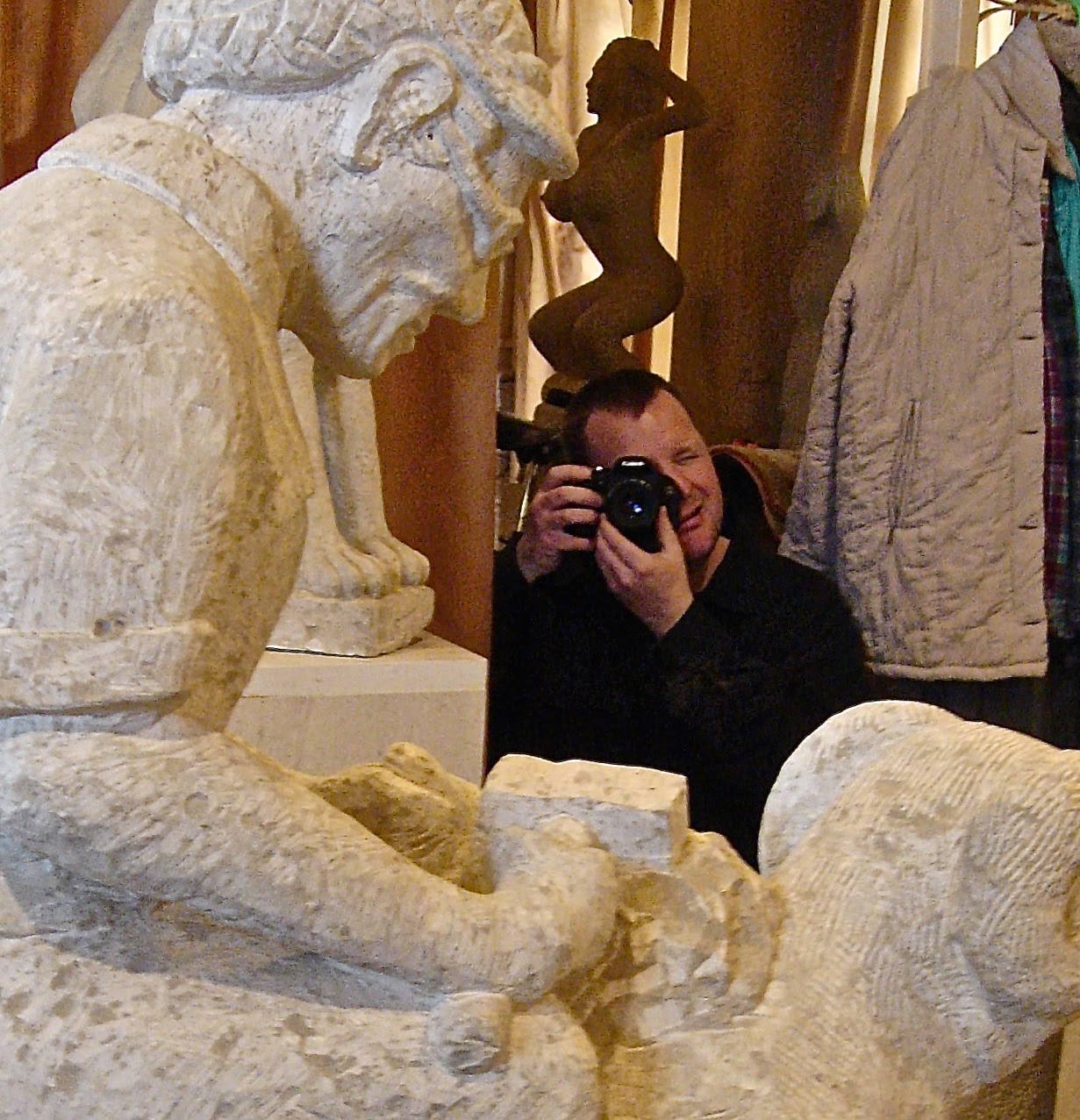 He uses a far better camera than mine. Publishing even one picture fits the hope Angeliki and I share of another increment to her grandfather’s public presence – in this case his craft and his gift for ribald illustration of human frailty.  Richard said “It’ll go down a treat in Catholic Ireland”

Anna, holding Stavros her little nephew, welcomed us again into their home, turned on the lighting in the familiar rooms where the stone and marble works sit on packed shelves. Rob set up lights and tripod and took pictures; used his laptop to check results. 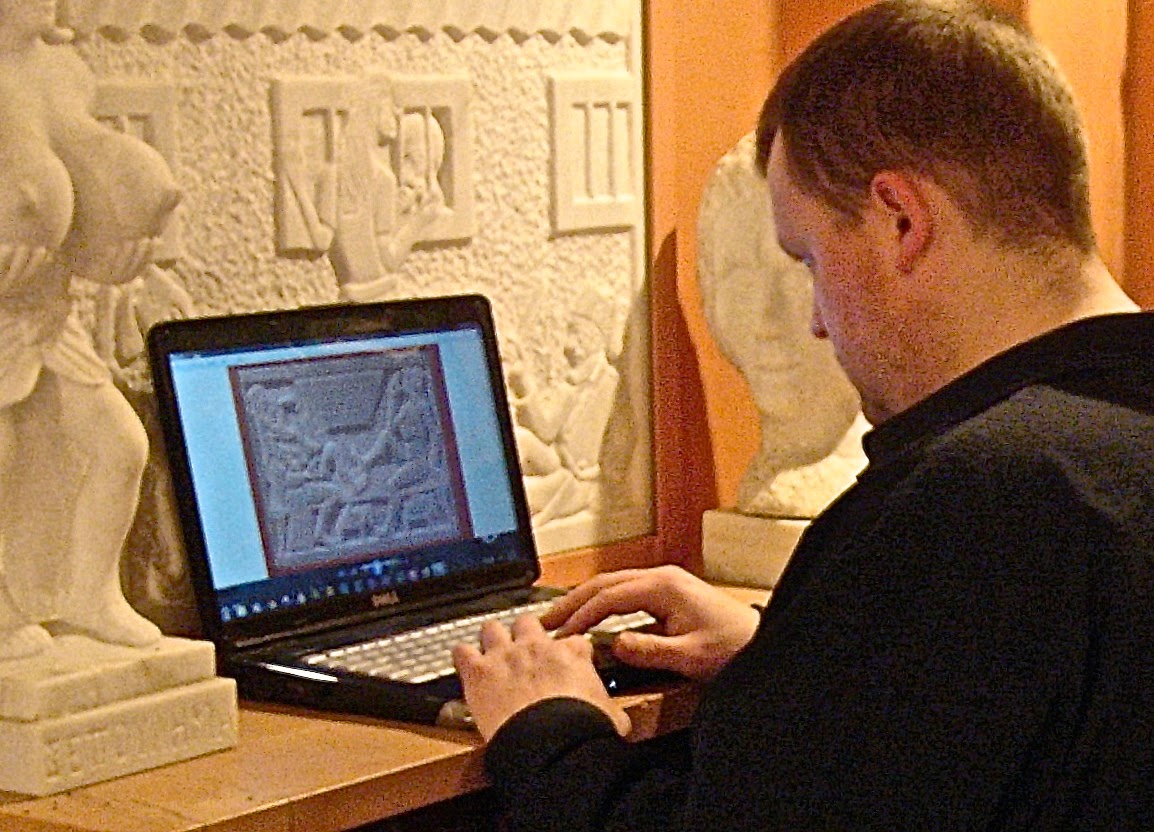 “I’ll work on these tonight. If you could link to robgroove.com I’d be happy”
“Send your best choice straight to Richard. Copy to me”
Richard’s email re ‘The naughty bishop” – a scandal of the mid-1970s.


‘Yes, it's better - much clearer contrast. Many thanks for organising it.
You didn't say whether you'd prefer Chrysomalis or Nino's - where we were (the 3 of us) before. Please let me know. The bus I will be taking is the 4pm to Acharavi - it goes straight on from Tzavros, not turning right to go through Ipsos. Not sure if it stops anywhere from where you could get to Ano K.

SB: We’ll see you at Chrysomalis. Your bus can drop us at the turn to Ano Korakiana off the Sidari Road. Only 2 kilometres to the village.

Once at lunch – the usual disappointment starting with tourist guff about this being Lawrence Durrell’s favourite place (he did have a favoured table by the window and told someone seeking a signature to ‘f’ off’. That was half a century ago and more.) Lin’s chicken was reheated; my giant beans straight from the tin; the chips pre-cut. But at least we got a receipt.
“I’m long used to being offered with and without receipt prices” I said “and I still get them from the baker in the village, but in the last week I’ve had more avoidance receipts than ever, with excuses about broken tills, a lengthy request for tax number and other personal details to enter in the computer until I give up, and at a garage when I followed up the now familiar avoidance – despite the valuable word ‘ λοιπόν’ to allow a pause and rethink – I said “I’m supposed to get in touch about this with Mr Varoufakis”
“Ah yes well when you speak with Mr Varoufakis please ask him to drop in and mend our cash-machine”
Richard, over his tepid plate of wrinkled greasy rice stuffed tomatoes, said “You know, I know, and everyone in Brussels knows that despite the lip service absolutely nothing is being done to try and extract tax owed by the very rich. I suspect it’s impossible. Maynard Keynes at the time of the Treaty of Versailles wrote a policy paper to the Allies saying there were two choices ‘Enable Germany to rebuild her economy despite all animosities, or bring her low, gutting what’s left' "
To the bruised and vengeful allies the generous option would have been politically impossible, even morally feeble. No Marshall plan in 1919.
“The consequences for Europe and the world we all know. The troika with Merkel’s support intend to maintain the pressures that over the long term will reduce Greece to the economic condition of a third world nation” (Richard's latest article in the Irish Times)
The pace of real disaster seems snail paced against the fireworks of TV entertainment we enjoy over evening meals. Striving to stand back far enough to get a perspective on an unfolding catastrophe I wonder how in the midst of this national crisis with its wider corollaries anyone would want to watch something as invented and artificial as Black Sails, House of Cards or Game of Thrones.
Tsipras is playing a weak hand but playing it as well as anyone whose promised not to be as obedient to Brussels as his predecessor Samaras. I emailed John Martin the other day. He and Annie went to a conference at Birmingham University last week. He’d asked for my impressions:


Dear John. Sorry you seem to have missed Richard in Birmingham.
I’d like to know if the accomm at the Bull was quaint and interesting or unmentionable.
With your customary generous manners I can see you not grumbling to me as I recommended. But I’m hoping so much it was OK and you didn’t have to move out to Holiday Inn or equivalent.
Hope Cats was good. Happy Birthday to Annie.
In Corfu everyone speaks of endless rain but we’ve hit a lucky set of blue sunny days with the wood stove needed only at night to keep us cosy in the house.
General view of the ‘situation’ here is that the SYRIZA government needs its first 100 days and that Greece is playing the toughest of games despite a lousy hand. The cards? Card 1: Austerity doesn’t work. Card 2: Don’t drive us into the hands of Golden Dawn. Card 3: Russia and/or China. Card 4: German WW2 reparations -  cut us some debt-forgiveness like Germany got war forgiveness via the Marshall Plan. Card 5: We really will do something about corruption and tax collection.
Systems of tax collection have closed down here pending the new government’s resolutions on what will be stopped, modified and renewed. So even if we want to pay our taxes we can’t. All is on hold.
There is a feeling of resigned waiting, but it still feels slightly better than under the previous government.
Varoufakis seems to be lying low at the moment. His initial coverage led to vexation and some envy of ‘bandstanding’ in his own party; SYRIZA already being a loose partnership of several left wing parties.
How does it look from your perch?
Our children stepped in to look after Lin’s mum. It’s so good they enabled her to get away, but Lin’s mum Dot has an alarm button that rings with Amy, Richard and us if pressed. Dot’s been mistaking it for the normal call button. I think that’s sorted now. Love to all, S

*** *** ***
It wouldn’t need a theologian to argue that hefting a plastic bag of just born kittens out of a wheelie bin is no act of charity. We were walking down National Opposition Street in the dusk, further than we’d planned. Distressing cries came from within.
“There’s a cat trapped in there” said Lin lifting the lid “Oh no it’s kittens in a bag” There were four of them soaked fur matted in condensation, one dead already, umbilical still attached.
Next day chatting to Katerina she gestured with a heave of her arm the obvious sense of chucking them back where we’d found them. There are feral cats in scores across the village. By then our rescued kits – two tabby, one ginger - were in a cardboard box, wrapped in a towel on top of a hot water bottle being fed Lactol solution from a syringe dropper bought at the pet food shop in Dassia.
“Lick them with a sponge in warm water” said the woman there “as the mum cat would to keep them clean”
“So what do we do with them?”
One friend advised “Take a fetching photo. Float them on local Facebook. Say if no-one claims them by the end of May – if they last as long – they’re off to the vet”
“I’d like to let them loose to take their chances with the other village cats” I said
“They’ll be eaten alive. They’re going to be domesticated by you tending them. They’re domesticating by the hour”
“Great. Why don’t I just clobber them with a spade now? Dig them into the wisteria roots like the butcher’s fresh rabbit skin”
They have all died now, increasingly enfeebled, they've faded away. Without the attention of a true dam our ministrations were futile.
*** *** ***
It rained. “We’ve had so much rain” everyone repeated. Down at the Sunday table-top sale at Sally’s Bar we skyped Amy, outside to get away from the piped sound indoors, but Lin protecting the screen from stray drops of rain. Something about a shower screen bought on ebay but sent without the bar that attaches it to the wall. Amy - in bed with our grand-daughter crawling vigorously back and forth while Oliver naked bounces in and out of vision grinning at us across the ether - checks the ebay description and seller’s details on her phone. 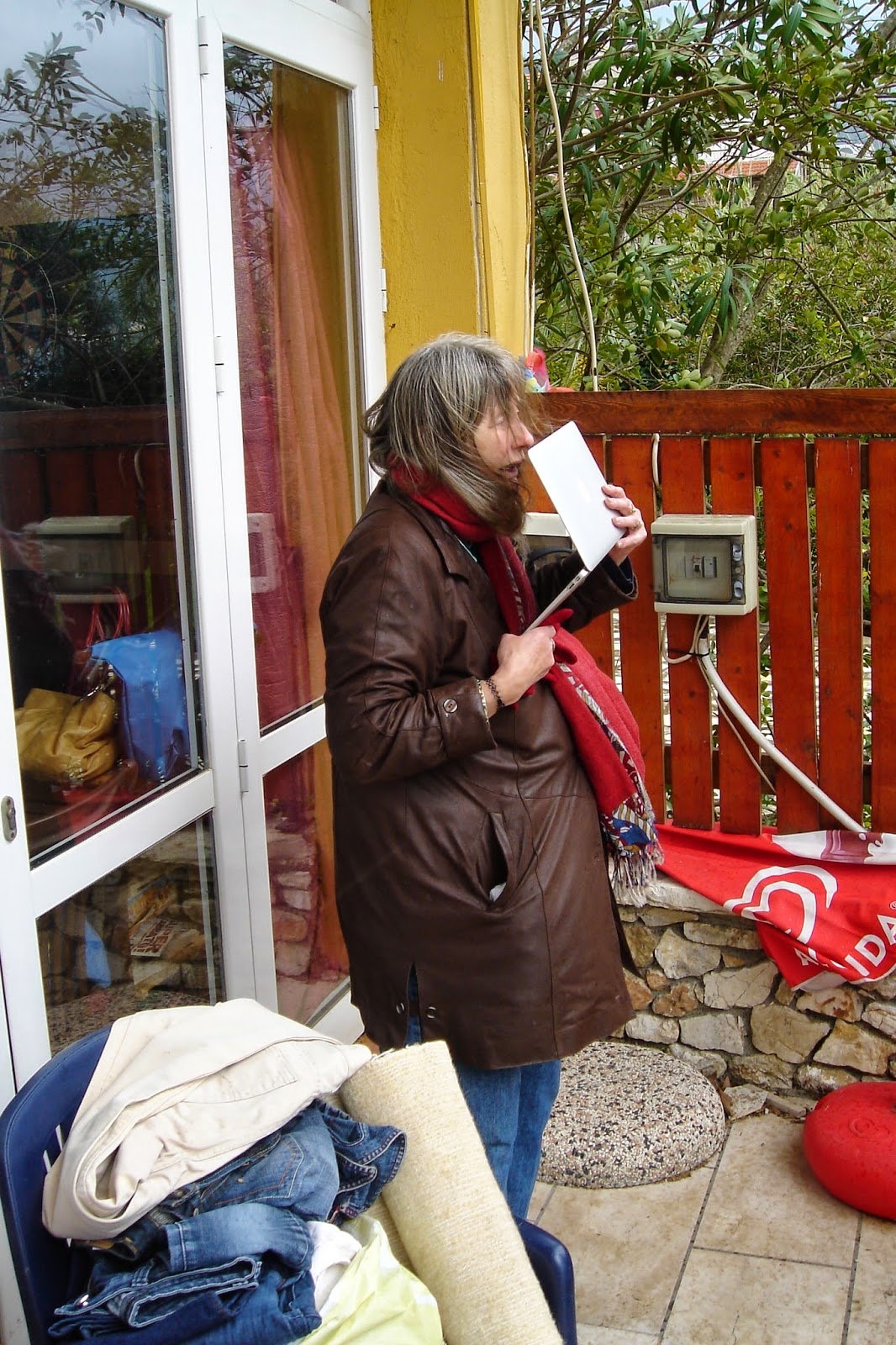 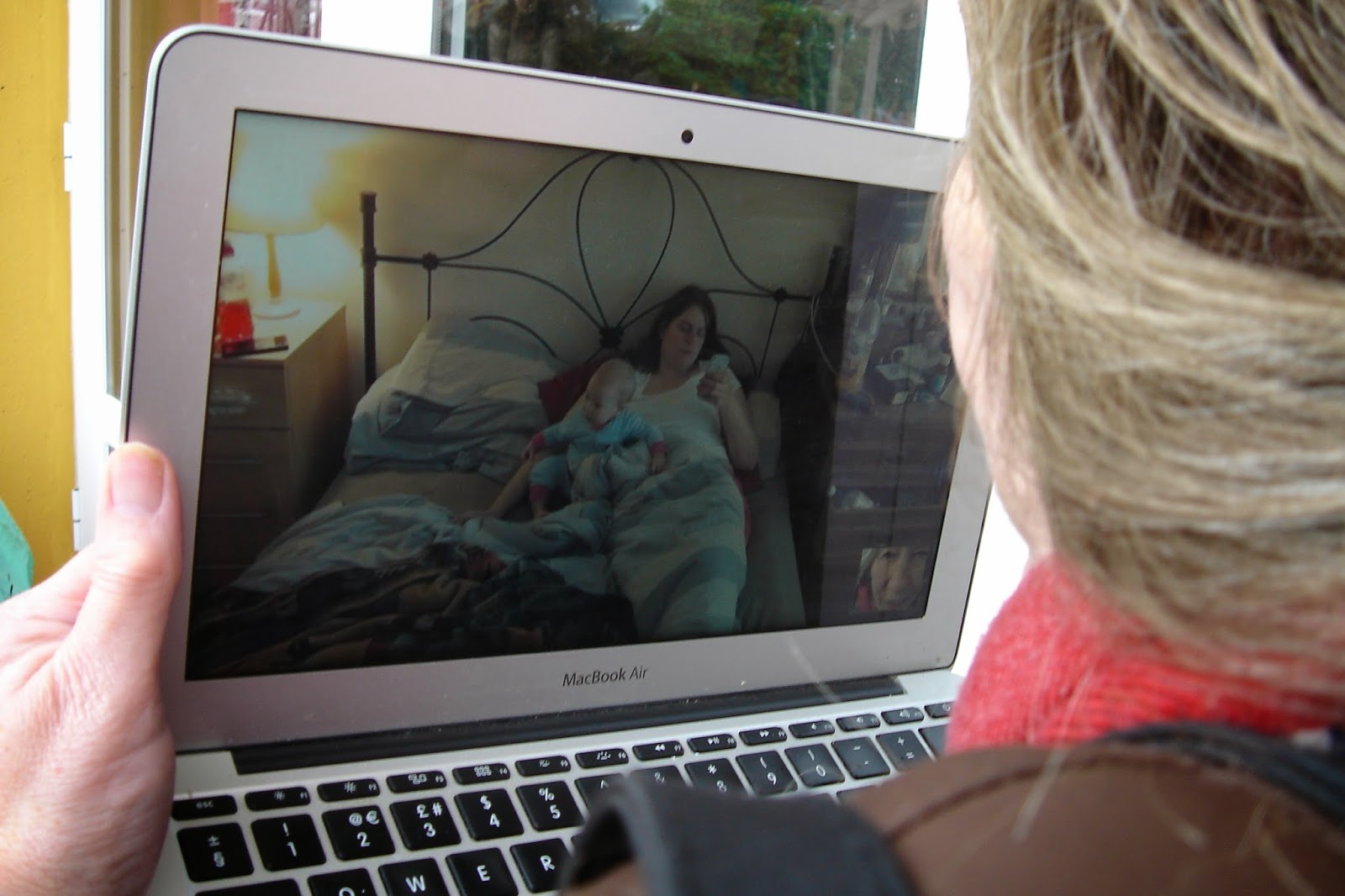 On the Ipsos esplanade, almost deserted, the unsightly palms bent to a wind from the south. 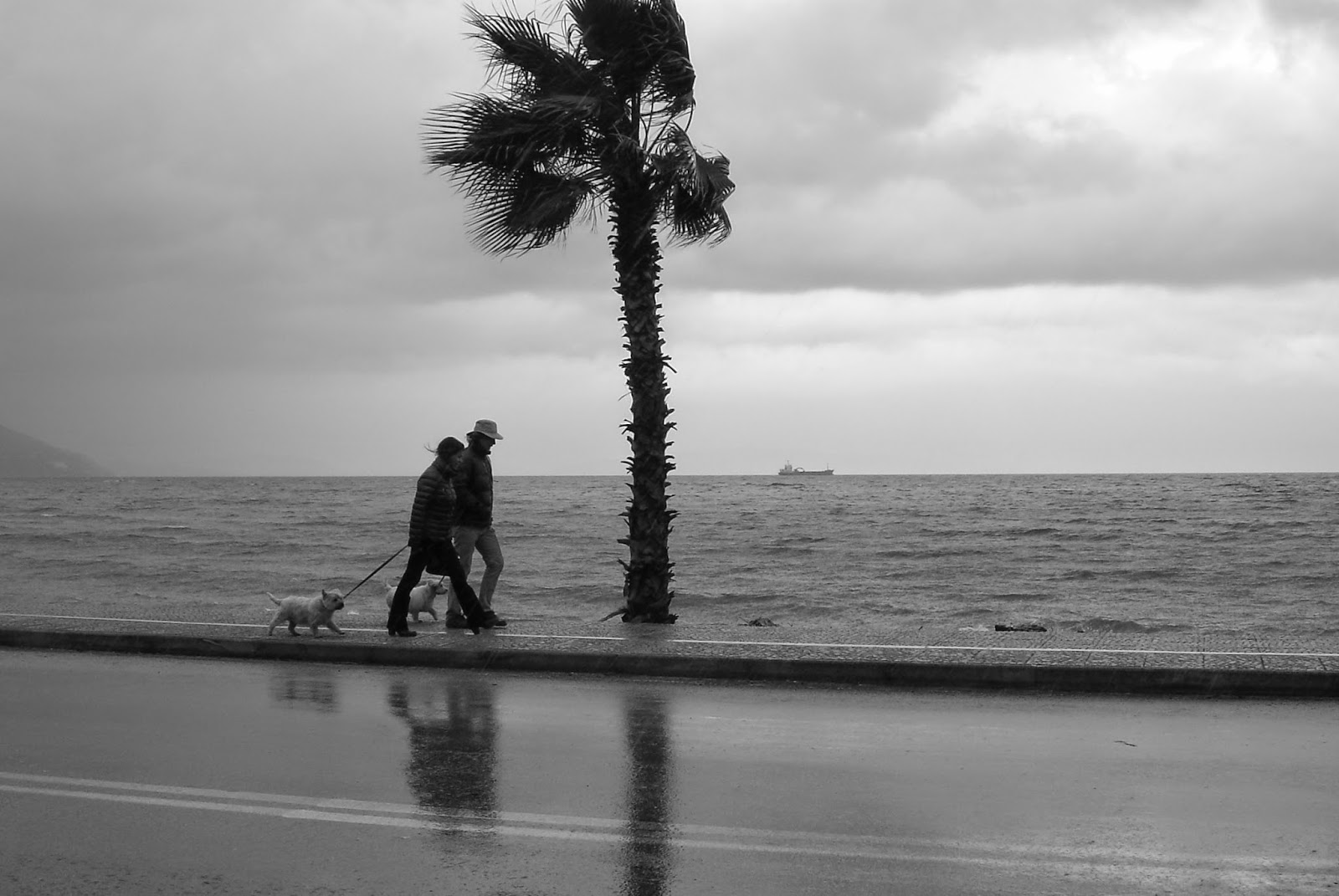 *** *** ***
I’ve been engrossed in a South African police procedural. Heart of Darkness stuff, in the publisher’s words ‘World Noir’, translated from French in 2008 Brian Epkeen, South African Police officer reflects on his boss’s inabiity to proceed with a politically charged case


‘Faced with competition from world markets, sovereign states could do very little to withstand the pressures of finance and globalised trade, unless they wanted to alienate investors and threaten their own gross national product. The role of states was now limited to maintaining order and security in the midst of a new world disorder controlled by centrifugal, supranational and elusive forces. No-one genuinely believed in progress anymore, the world had become an uncertain, precarious place, but most decision makers were happy to let the pirates of this phantom system continue with their plunder and to take advantage of it themselves while hoping it would all blow over. The excluded were pushed farther out onto the periphery of huge cities reserved for the winners of a cannibalistic game in which, with no prospect of collective action, people’s widespread frustration was channeled into television, sports and celebrity culture.’ Caryl Férey Zulu (2010) pp.379-380

The plot is relentless. Good for the Christian week of despair. ‘No-one genuinely believed in progress anymore’. Is that my elderly mood or a national spirit in the few more weeks before our uncertain General Election? Re the panem et circenses comment, I enjoy some television. Watching sport and following celebrities rate with glue-sniffing. With my stepfather I'm probably living in the cracks between ever spreading concrete. In my dreams I’d like to see myself as a clerk of small works, alert to my position and the opportunity to garden, pick up litter and do the occasional small-orbit good turn, and meet good people. I’ve not got much time for public anger. Private vexation is another thing.
Posted by sibadd