'Greece offers you something harder'

The sublime and the ridiculous are often so nearly related, that it is difficult to class them separately. Thomas Paine

I'm pretty confident Lawrence Durrell’s family didn’t engage in anything so banal as completing a local tax return when they lived here long ago, nor needed 'pink slips'...

...as sure as I am great Achilles didn't have to tear off the fiddly strips of silver paper on top of small cartons when adding milk to his coffee, if he drank coffee or would have drunk it as anything but skirto …unless this seems a cheap trick it’s a memo to myself that the membrane between bathos and the sublime is permeable, sometimes as brittle as courtship – a looking glass - but mostly an ever-present screen through which musings flow as easily in both directions as a stand-up who dies one night and brings the house down the next…
A friend sent this to us:

If you have to declare income in Greece this year, you will need a lot of patience. From this year onwards, all tax returns will be submitted only online, but this will not facilitate the process. To the contrary, you will not get away with waiting in queues at the tax office or with the bureaucratic madness, which we are familiar with at present. The only way to deal with another administrative obstacle is to find information and a lot of patience….To be able to fill in the tax return in Greece, you must have a code to use the online state tax system TAXIS. How to obtain this code:

3. Choose whether you will fill in the tax return as an individual person or as an entity

4. Fill in the requested information

5. Then, go to your local tax office to obtain the codes to fill in the tax return.Since the beginning of the week, the queues at the tax offices for obtaining the access codes to the system have been enormous. People have been waiting for hours to be able to return home and start filling in the tax returns online…GR Reporter 28 May 2013 Tax pains 2013)

Lin found a guide to the Hellenic tax system:

2. WHO MUST FILE A RETURN? More specifically, those residing abroad must file a tax return in Greece, if ….Regardless of whether they have a taxable income in Greece, they shall file a return when…(e) they have purchased real estate or constructed a building in Greece…

Our Greek accountant in Corfu town is excellent but once he had dealt with the fines we needed to pay for a few years unsubmitted tax forms (ignorance of the law, as everywhere, being no excuse for its breach) it made sense that rather than waste his fee submitting further annual confirmation that we earn no money in Greece, we should ourselves file a return to this effect, doing it, as is now possible and indeed required, on-line.
The first step Lin and I learned from our friend Cinty was to get a one-time key code from the tax office to access and register ourselves with the Hellenic tax office website.
“Where’s the tax office?”
“In the Town Hall just off San Rocco Square, opposite the Theatre”
Ah yes, down St Dessilas or Manzarou Streets off G Theotoki, where they meet Samaras Street. These offices are not to be mistaken for the Municipal Assembly building which is half-way along N.Theotoki. We needed to meet the bureaucracy.
We rose at dawn to get there early and were in the foyer of our target building by just before 9.00am, ranging the dim-lit space like sniffer dogs, in our case seeking signage. I poked my head into a small open plan on the ground floor
“Tax office, please?””
One of two women sat in shadow turned from her small crowded desk to gaze at us before peering upwards.
“Up a floor, I think” I said to Lin.
At the top of two flights was a long screen with a few people at windows talking through to people behind. Promising. We assayed an eastward corridor. There were numbers on doors, titles, notices in abundance but nothing indicative. I knocked hopefully on a door and heard an invitation to enter.
“Where do we go for tax?”
A hand was stretched out and a finger pointed back where we came, with a suggestion we wind leftwards beyond the head of the stairs we’d climbed. Round a corner in the colourless gloom we came upon a ragged queue of people standing and seated near a half-open door in a cul-de-sac - a corridor of powerless.
“Excuse me. Does anyone speak English?”
Silence of the waiting, then a lady smiled and said “Yes”
“Where do we go to file our tax?”
“Here” She indicated the door marked with a number 9 – handwritten - just opposite where she sat. Was she at the head or the end of the queue?
“Can we do it on the computer?”
“Yes. But you need a key”
“Can we get that here?”
“You must ask an accountant I think”
“We would like to do it ourselves”
“Yes but you need an accountant to get you a key”
“Perhaps we should cut our losses at this stage” I murmured to Lin and we turned to descend.
“A moment” I said “I really want to see what this room looks like”
I insinuated myself through the queue breathing English apologies and put my head round the door. The room was smaller than I expected with less than four desks and screens – long ones with cathodes.
“So sorry” I gazed around with as much pathos as I could manage “Does anyone speak English?”
Two women head-gestured me to the woman nearest the door “Georgia”
She was already with a client.
“What do you want?”
“We need a key to file a tax return”
“Wait a moment. You have your tax numbers?”
“Yes yes. All that and passports. Shall we wait outside now?
‘No no”
Urgently I call Lin to join me.
“Quick quick” I made apologetic gestures to the woman already waiting.
Lin read out our tax numbers.
“Your passports”
Lin handed them over.
I felt excited; made more apologies to the other client who smiled in a sweet way “No problem”
“Thank you. Thank you so much”
My heart was full of a grateful supplicant’s deference and amity as we left after a short telephone exchange that brought us our one-time keys and passwords.
“Is the website also in English?” Lin asked as we left
“I think so”
Looking away from the queue by the door we headed down to the street

“Blimey blimey” I gasped as “we’ve been in there less than 30 minutes”
Lin sparing with praise said “Well done that Baddeley”
We drove home via Sally’s Bar at Ipsos where Lin found the site as well as a tax guide that could be downloaded as a PDF. It was in English but the website was in Greek.
“Cinty’s place?”
Back in the village Cinty made us tea and coffee and sat with Lin as she entered our key numbers and registered… 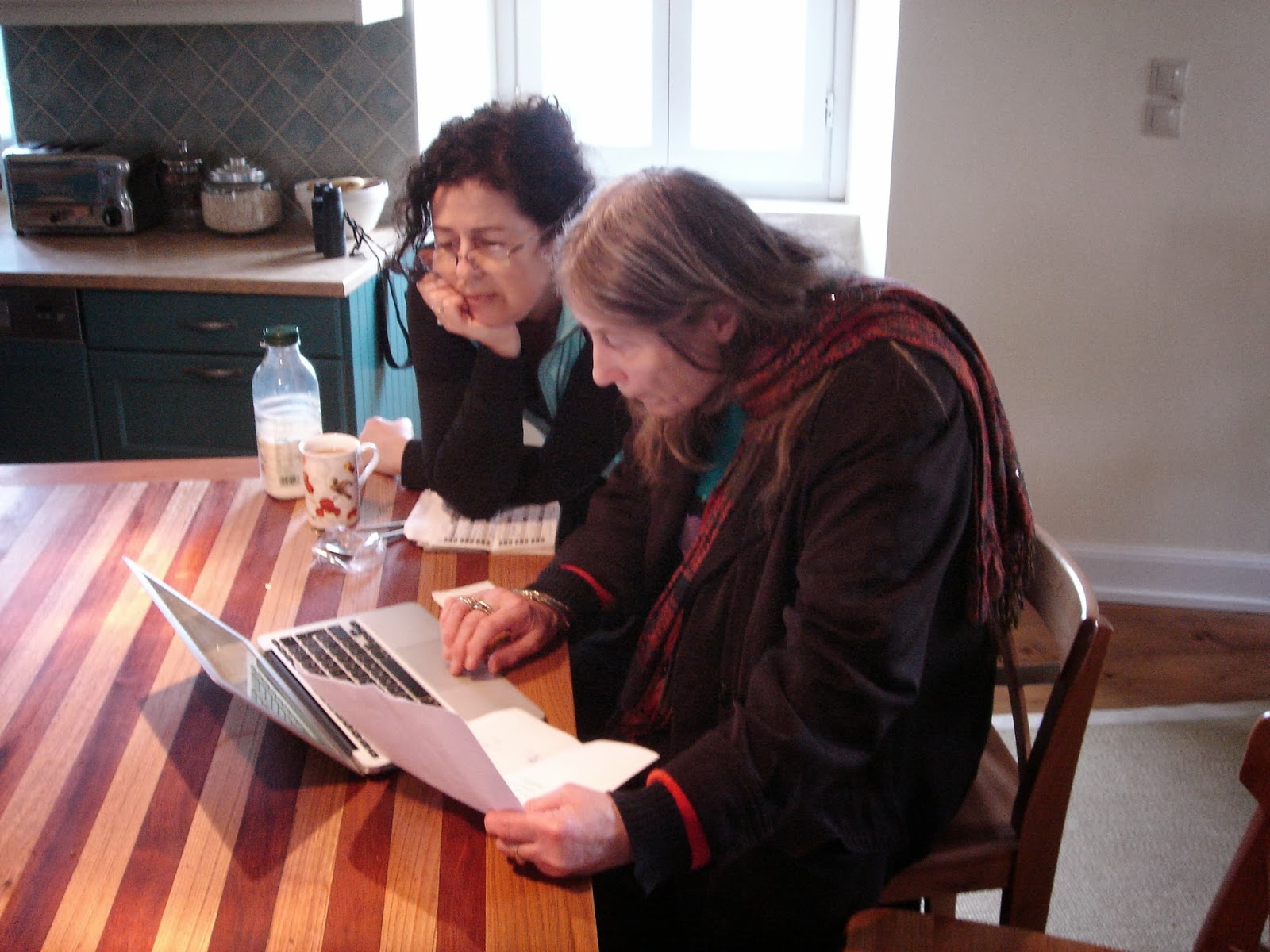 “We’re in!”
Clicking on the options for the forms we needed, none, said the computer in red text, applied to us.
“Oh well. We’ve done alright so far and the return doesn't have to be until May"
“Put a request for help on Corfu Grapevine on Facebook” suggested Cinty

Hi there. Helpful and informative advice needed with on-line tax forms. Linda and I have registered for Greek on-line tax form submission. Our accounts are now open, but we don't know which form we have to fill in. We're non-resident but own a house on the island, retired and receiving no Greek income. Our money comes from UK and we have pink-slips to that effect. Could anyone please tell us which form we need to click on for this? Thanks in advance. Simon & Linda
**** ****
The rain comes more frequently now - day and night - wind blown shallow streams of water running up and down Democracy Street. Photography doesn't do so well depicting rain. I need the lines in the sky that the Japanese do to get the sense of what this feels like, as water descends from the overcast with its quiet roar like falling rice on our sturdy roof, big drops racing down the glass of our few unshuttered windows, the clouds pushing up the grey-green slopes behind the village.

The sculptor Aristedes Zacharias Metallinos (Αριστείδη Ζαχ. Μεταλληνος), brother to Spiros and Xthoforos, one of three sons of  Zacharias and Eleni Metallinos, was born in 1908 (no official record of birth date) and died at 79 on 19 May 1987. He spent the greatest part of his life working as a general craftsman in the village of Ano Korakiana on the island of Corfu in Greece. Despite early evidence of his imaginative talent as a carver of stone, Metallinos was prevented by poverty from artistic training. He did not begin his work as a self-taught sculptor until 1973, when at the age of 67 until his death in 1987, he fulfilled a long held intention of creating, in local stone and marble, a unique record of the fast changing social life of the village’s pastoral economy, emphasising the role of the family and traditional customs. To this the sculptor carved, as his work evolved, a commentary on human nature and the world - one that was often pungent, erotic and at times ribald. His work of over 250 pieces, nearly all completed in the last 12 years of his life, is kept together in a family museum in Ano Korakiana - a museum he built himself, intending it as a gift to the village. Aristedes' first wife, Eleni, died childless. The sculptor was married again, late in life, to Angeliki, who bore him two children, Andreas and Maria. Andreas, and his wife Anna, continue to live in Ano Korakiana in the museum that houses a unique collection of work largely unknown outside the village in which it was created.

(I cannot hope to get this accepted as a Wikipedia article without external references - so I need to get these for the additional papers Angeliki has copied to me, one of them - Δημοσιεύθηχε στο περιοδικό Μυριόβιβλος 7 (1985) . σελ. 37-47. I realise that until now I've been spelling his first name 'Arestides'. In English it should be 'Aristedes')


*** *** ***
So beloved Amy allows us to go public on the arrival in July of another grandchild.
*** *** ***
We missed the cutting of the Vasilopita cake this year. We shall also miss Clean Monday Καθαρά Δευτέρα, on 3 March this year, the first day of Lent, and the Ano Korakiana Carnival, (2010 record) but need to return to England for some weeks: