Liz came to us with Amy and Guy and Oliver on Sunday. A dropsical blanket of cloud lay over the city, ragged underneath, releasing showers. It was Carnival in Handsworth Park, without the right weather for parades or dancing. Glimpses, instead, of goose-bumped flesh in sequined motley under drizzle. With intervals of downpour. Security - police and G4 - were everywhere. We came in around 3.30, strolling from home to the Hamstead Road gate. Lin was chosen for random search, patted down and bag checked. We strolled and milled between vast speakers vibrating my chest cavity. There seemed to be lots of fat people about and the music was, at least for an hour, a recorded Marley medley, and just for a moment - with "Every little thing gonna be all right" - that wonderful song of many wonderful songs lulled me away from my small troubles.

Rise up this mornin',
Smiled with the risin' sun,
Three little birds
Perch by my doorstep
Singin' sweet songs
Of melodies pure and true,
Sayin', "This is my message to you-ou-ou:"

Singin': "Don't worry 'bout a thing,
'Cause every little thing gonna be all right... 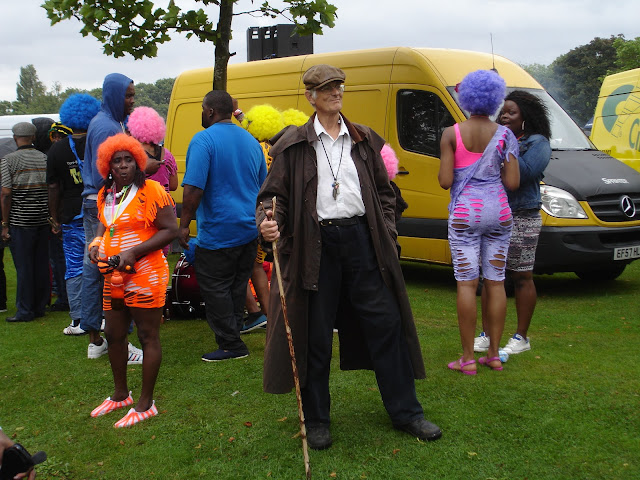 We waited for the Carnival Parade ending according to notices at 4.30 in the park, then learned there’d been just six floats; that the parade had set out early along Soho Road, arrived in the park at four and dispersed – a contrast with better days when everything and everyone was reliably late as part of the style. Susan Green, long time part of Handsworth, a neighbour and friend writes on FB:


Carnival was dreadful this year. The worst ever. I had friends visiting from out of town and I was embarrassed. Carnival has now been totally hi jacked by those who have no interest in the art form but just want to have a Jamaican style dance hall event with booming sound systems in our park and use carnival as a fig leaf. Around tea time - well after carnival had ended they turned up in droves for the afters party in the park. They do not support carnival, they can't even be bothered to turn up in the afternoon to support it. My heart goes out to those such as Carnival artist Professor Black who work such long hours to try and keep Carnival going but who get little proper support from BCC or indeed from the Carnival committee. if they want to run a Jamaican dance hall cultural event they should be made to apply for support in their own right and make their own arguments for it instead of hi jacking Carnival . Simmer Down the reggae festival run last month in the same location was well organised, safe, an excellent family event with great live music and those of us living on the doorstep didn't have to suffer loud sounds until late at night and aggressive crowds milling about in the streets after all the so called security and cops had clocked off.


The Jack Book is now online:


*** *** ***
There is an apple tree bearing fruit; one marrow the size of a courgette; a crop of Jerusalem artichokes, a few rows of potatoes, a rhubarb, a few broad beans, a frame of runner beans - and of course there's flowers, lavender, buddleia, and small trees, pears, plum and cherry, so far still fruitless. My shed stands and in the last day I've done some mowing of the encroaching wild grass wild flower meadow that covers so much of my neglected allotment.


I've got excuses for this neglect. None convinces me. But nor am I ashamed. I just know I have to persevere, continue learning;  be inventive. For over a year now, things have not been so good for the whole site. A small complaint by a friend about the 'remoteness' of our committee was met with indignant defensiveness. Clive Birch, who I've long known, secretary of the Birmingham and District Allotments Confederation became involved as a mediator. As things proceeded I, normally inclined to be partisan, wrote a note to Clive and X (the complainant):


Dear X and Clive
STRUGGLES ON THE VICTORIA JUBILEE
Thanks both of you for trying to resolve the real difficulties that exist and for showing respect.
I wish I could help but I feel that unless I take part in the work of our rather overburdened committee I’m not entitled to criticise.
We have a shared problem, yet it all began so excitingly when we opened the site in June 2010.

Opening day of the Victoria Jubilee Allotments from Simon Baddeley on Vimeo.

In these difficult economic times there is a serious lack of take up of plots on the VJA. This makes all allotments vulnerable - given the continued interest of developers in urban green field sites and government pressures to create more housing that does not infringe green belts or in-fill our  suburbs.
I also think there are VJA plot holders who, being new to allotments, have been discouraged by a mix of ill weather over two years and our challenging topsoil (Adrian Stagg admitted the developer had done an unsatisfactory job on this score and that BCC were minded to delay opening the site, but ‘we’ urged him to let us get started.).
On top of this, decisions by the site committee have not been based on talking to as many gardeners as possible. I also think that BCC Allotments section have for all sorts of understandable reasons been unable to give us much help with self-management. This is a problem across the UK of course.
The hedge cutting on the VJA (a familiar landmark, shelter and windbreak which we had earlier campaigned to save from the developer’s bulldozers) was a source of contention (given so many other more important things to be achieved like attracting more plot holders, helping those who were failing and holding site visitor events). The reasons given for cutting back the hedge and the last tree on the site - albeit a humble sycamore - are unconvincing, but that whole business was simply a straw on an overladen camel. We are surrounded by some of the most beautiful greenery in the city right next to Handsworth Park!
The VJA committee has struggled with high turnover, and lack of help from other gardeners, so that as well as isolating themselves they have themselves been isolated. Chicken and egg. I am as much a part of this as anyone.
The failure to change notices on the noticeboard, after two years even, is just a symptom. We need a special kind of rare leadership that will stir enthusiasm, keep up spirits and show inventive and creative ways to get the VJA back on the map within our community. I guess, given the right cues, we could all do it together! We badly need more sunshine among ourselves, and for relative novices, encouragement for the hard task of growing our own vegetables. There are a few brilliant gardeners on our site. I have already learned from them and they prove that good things can be achieved with hard work and perseverance, and some of the skills and craft too many of us are still struggling to acquire.
In short, Clive (and X) I think the VJA shares a problem of low morale and its consequences, but I’m sure that with decency and civility and generosity we will be able to put these difficult times behind us.
Right now we all need all the encouragement we can give and get.
Thanks for your continued interest Clive, and thanks X for having the bottle to raise your concerns which are not yours alone even tho’ at times that is how it must feel. My best wishes also to the committee who must be feeling ‘got at’. Please persevere. darkness before the dawn etc.
Kindest regards and best wishes and hopes of spreading good will. Please stick with us Clive! Feel free to call me in case I can add more to the drift of this letter. Simon. Handsworth Allotments Information Group (HAIG)

An email from Clive to X on 2 Aug:


X. Your comment ref fraud are noted and we can agree. Ref minutes of a meeting it is essential for their acceptance as a "true record" otherwise denial of validity of contents could ensue. We agree that open communication is essential but that information has to be correct and not misleading. Open committee meetings allow any tenant to see what is going on. Hedge - no dispute that it was a mess, BCC contractor has full responsibility! I agree with Simon's view that plot holders need a boost and committee and individuals can do this. Best wishes, Clive

This BBC news story in June gives some context - Allotment keeping proves no walk in the garden. Betty Farruggia, the superb secretary at Walsall Road Allotments in Perry Barr is quoted saying there was a quarter plot vacant there, for the first time in 6 years.


"Until recently we've always had a waiting list of at least 12 people...The council did increase the rent but only one person left because of that so I don't really think the cost is a factor." Rent varies depending on the size of the plot, ranging from £40 to £90 per year. It is half price for people aged over 60. Ms Farruggia said weather played a part in people giving up allotments, especially when "disheartening" disease ruined harvests. But tending an allotment is also more difficult than expected..."Sometimes it's simply that people don't realise how hard it is - they think they might like to have an allotment but that it'll look after itself. "They can end up taking it on and then not coming back."

A while back I filmed myself working with an azada and before that with a mattock...

Working our allotment on the VJA from Simon Baddeley on Vimeo.
*** *** ***
In distant Ano Korakiana...a party for the Pantocrator, Του Παντοκρατόρου το πανηγύρι...

The wooden bridge to the garden behind the house has been repaired; a new back door fitted. Upstairs walls have been repaired and painted, sources of damp, given the wet weather this year and last, look to have been dealt with... 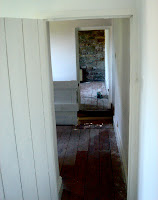 ...though Lin detests the new windows, more Royston's choice than her spec. I'm relieved the old wooden frames, some rotting, all difficult to open, have been replaced. Apart from furnishing and carpeting, further work will be downstairs starting with the bathroom and stable-door porch and hall - a right mess. There's also as Royston points out a great need to allow the house to get more sun, so we'll go down again in a few days to use do some urgent estate work on the encroaching forest. 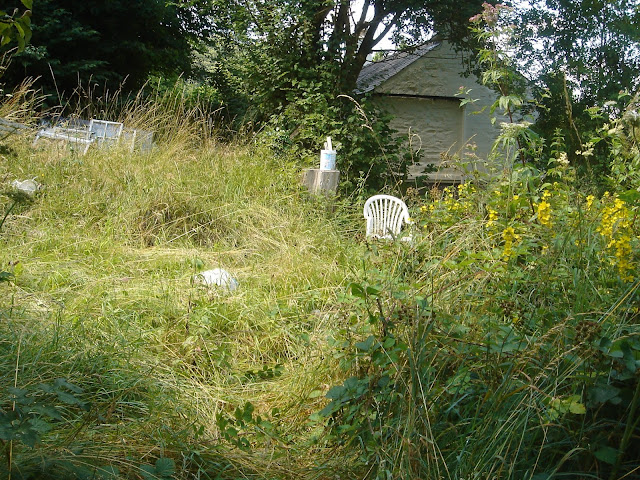 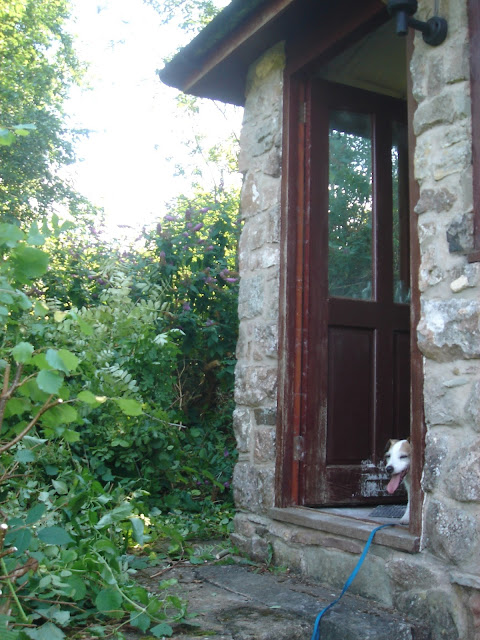 And in Handsworth we've been giving attention to another garden. Handsworth Helping Hands was asked by the householder to see what could be done to clear, tidy and improve a back garden and frontage in a Handsworth terrace off Rookery Road...


...in 4½ hours HHH cleared and swept a small frontage and removed a heap of tangled weeds and thick grass at the rear, but to slab or turf to give play-space, the soil needs digging over and levelling. We also tidied and swept an alley and removed cut green waste and rubbish entangled in the greenery...