We're all in the kitchen here, Amy. Liz, Oliver, Lin and I, with Flea watching us making lists... 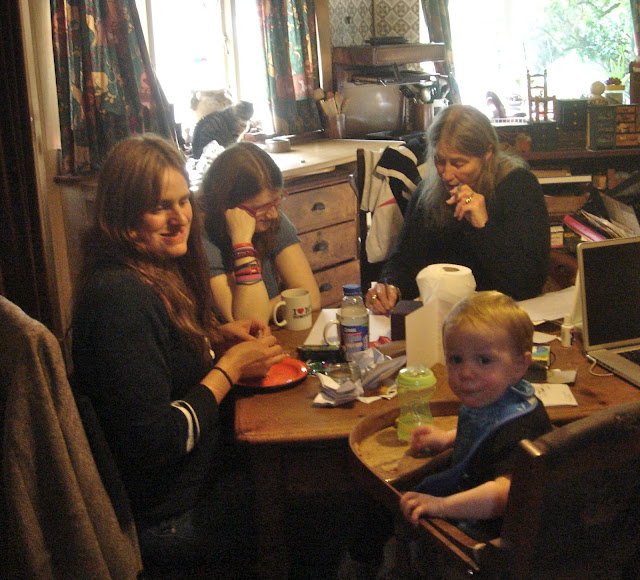 Going back to an afternoon in 2009 on the other side of the world:


Meanwhile in the small town of Newstead, in Victoria, population according to Wikipedia, 487, I was taken to a community meeting in the main street coffee shop where there was a Sunday afternoon get together to discuss the implications of Social Networking with an invited academic, Barry Golding from Ballarat University, gently expressing his reservations about the difference between real face-to-face contact and that offered by, for instance Facebook or Twitter, and reminding us just what en enormous part of the global population has never made a phone call let alone having access to the world wide web, while someone working for the State of Victoria, Ben Hart, suggested - with equal politeness - the potential of the medium. We had WiFi where we met and after the Q & A session I couldn't resist asking to have myself pictured 'in country' by a page of Democracy Street blog. 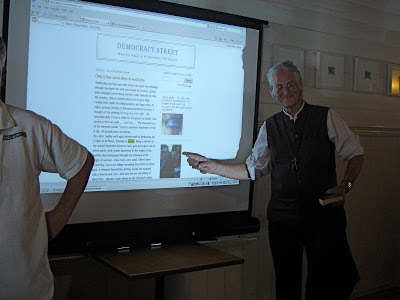 It's not that I'm out of touch with information technology, nor anything but fascinated by inventiveness, No amount of communication via the vast but invisible stringing and switching of the internet can impart the sense of place I'm not at. I scan the Ano Korakiana website and follow a couple of Facebook sites on Corfu - one proving very popular among ex-patriats for buying and selling, co-ordinating searches for missing dogs and cats and finding accommodation - Corfu Grapevine - and another - Only Corfu Society started by our friend Aleko Damaskinos - for exploring facts and and sharing fictions about the island, and of course there are many others in many languages, not to mention panoramic photographs of beloved places and unique Corfucius. There's skype and email and ordinary telephone and of course memories I've streamed on Youtube and Vimeo. None impart the sense I associate with the places from which I'm absent in a way that consoles me for not being there. A place is touch, smell, sound but above all direct human contact and in a smaller but important way the anticipation of those in imagination, a kinaesthetic sense of things akin to the absolute reality of a dream. Music can evoke it; a sudden burst of a familiar sound on radio or TV  and I know - as if an internal sluice is opened, my chest flooded with such fullness, I suffer a momentary difficulty of speech.