I noticed his name badge - Phil Ypres-Smith. He was the expert at City Hospital Hearing Treatment Centre where I had an appointment on Friday morning, much sooner than I'd expected after my slightly grumpy encounter with the audiologist at my GP's, who more or less pushed a hearcheck screener in both ears and asked "How many sounds can you hear?"
"Sorry? What? What? What do you mean how many sounds can I hear? None! No. Maybe three. I don't know"
I apologised later for being so brusque.
"I've been telling you for years" said Lin later
I didn't know what I didn't know. It's so easy to compensate. Guess what people say. Read your lips. Just say 'what?' or 'sorry I was thinking about something, say that again.
I cycled to City Hospital where reception directed me to the low building next to Western Road. As I approached carrying my folded bicycle two doors swung open. I beamed at the receptionist
"Good morning. Did you do that for me" I said with a grin. I was blanked
"Have you your appointment letter? (pause, checks screen) Take a seat for me"
Then in comes a maintenance man covered in clips, chains and holsters
"Hullo, John" she says warmly "You coming in then?"
"Blimey. I didn't get that" I mutter "The leaflet says 'City Hospital Hearing Services Centre - where everyone matters"
A miniscule raising of an eyebrow by the other receptionist. I can almost see the 'thinks' bubbles popping from her head "We've got one here. Alert alert!"
I don't take a seat of course, but wander the waiting area checking the pamphlets and a glass display cabinet full of expensive looking hearing aids - I mean, deaf aids.
"Mr Baddeley? Come with me please"
A mild tall thin man about forty beckoned me. He invited me to sit on a plastic metal-legged chair in a small quiet room lined with insulating board framing a glass panel where after he'd put earphones on me, he sat opposite a screen to watch the effects of sending me sounds to which I was to respond by pressing a hand held button on an extension cord.
Now, I thought, I'll have a more convincing test. The door was closed. I was enveloped in blessed silence, my slowest breathing all I could hear. Bleeps came through. I pressed my button. This made sense. Not "how many sounds can you hear?" but "press the button when you hear something"
After noting several obvious bleeps, some came through quieter and I had the distinct impression of hearing sounds that were almost inaudible, so that I wondered if, trying to prove something, I was imagining them. Certain recognisable sequences were repeated. No doubt to test just this possibility. After a while. I was too interested to think of time, the door was opened and Phil Ypres-Smith sat me down beside him so's I could see the audiogram on his screen. 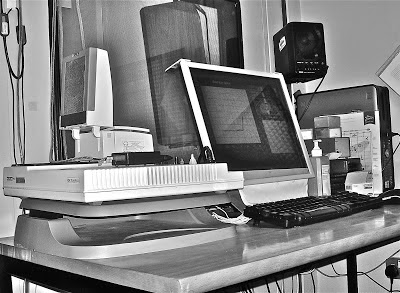 "Your wife is right and you are right"
"Go on"
A pair of graphs appeared on the screen; the one on the right for my left ear.
Phil traced his finger over these going almost too fast for me to follow. Far from patronising me I thought he's assuming I'm quite bright. I was certainly intrigued. How could Lin be right and I too. Things don't work that way between us.
"Did you work with loud noise?"
"I used to shoot quite a bit when I was in my teens - rifles and shotguns"
"Which shoulder?"
"My right"
"That's interesting. The deficit in the left ear matches problems caused by just that sort of thing, and that's where the report goes if you have the gun in that shoulder"
"Blimey. Come back to visit me after 50 years, like the ankle I broke when I fell off a horse when I was  fifteen. Gives me twinges in chilly damp weather"
"Your hearing left of the graph is in the 'normal' range for both ears. See where the line dips?" 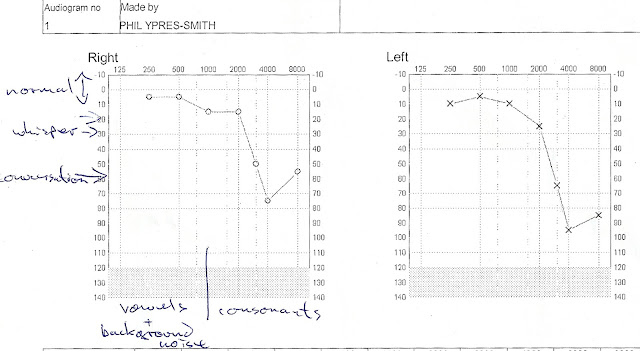 "There is a loss of hearing in the higher registers. That's what your wife is telling you about"
"Oh. Right"
"You can hear her say 'bed' but you might think she said 'red', because you heard the vowels but you may be confusing the consonants in a higher register. You may also have difficulty with whispering and conversation with several people especially if there's background noise"
"How did you get 'Ypres' in your surname?"
"My grandfather had sixteen uncles. When he was born they were getting killed in France"
"Smith was changed to Ypres-Smith?"
"Hm"
"Have you been to the Menin Gate?"
"It's on my bucket list. The thing is that if you see a sentence in just vowels you can make little sense of it. With just the consonants there's more chance you can. 'ao a e'? 'bcn nd ggs'? It's consonants you may mishear, but I am not sure a hearing aid would help. If you turned it to a setting that would amplify this area" - he points to where the audiograph dips - "you'd be getting too much volume here" He points top left to where the graph is nearly level. Thinks about it anyway. if things get worse come back, direct in the next few weeks, via your GP again after a year"
"There were long battles round Ypres through the whole war. The town was only twenty miles from the sea, from the Channel. What's it called now? Leper. Yes. My grandfather was there, and your great grandfather and his brothers."
Phil didn't know how Ypres had been added to Smith. It was done. What a memorial.
"That was brilliant" I said to the receptionist. Beaming, she pressed a button to open the doors for me.


Battles of Ypres...World War I in Flanders...first battle (Oct. 12–Nov. 11, 1914)...Germans stopped on their march to the sea...Allied forces surrounded on three sides...second battle (April 22–May 25, 1915) marked German use of poison gas...third and longest battle (July 31–Nov. 6, 1917)... battle of Passchendaele...British broke through German lines...seasonal rains turned Flanders into a swamp.. Haig persisted in his offensive...November 6 his troops occupied the ruins of Passchendaele, five miles from the start of the offensive...Allied and German casualties exceeded 850000.

The passing of another ‘traditional’ παραδοσιακή, source of raw material for clothes, genuine spinning and knitting wool, μαλλί, worn by the old, barely remembered by those slightly younger – the famous ‘tsoukrine' jerseys and socks etc). The production chain – shearing, washing, spinning, and knitting into cloth - is ‘broken’, replaced by synthetic materials and methods of production. The old method is vividly demonstrated as Thanasis Nikolouzos, with his wife Maria, with deft movements, shear a black ram from their flock. “To preserve just a picture for posterity”, soliloquizing, the animal patently endures the three leg strap, τριπλοπόδαρα, to be rid of the ‘burden’ of wool. With the ending of the shear came the summer rain...(my attempt at translation)