I love meeting someone off the train, a plane, or at the end of a drive on which I hear the crunch of tyres. I was at Kapodistria, sat on a concrete edge in the car park waiting for Easyjet 5058 bringing Amy and Guy and our grandson to Corfu. Their flight is delayed half an hour. I’ve been waiting an hour in delightful anticipation.
At last a rumble in the sky. Descending from the north, a tiny object – blinking in the sun – passes far overhead. I catch a hint of orange before it fades into the blue. Ten minutes later - the duration of a large turn almost beyond the tail of the island, over the mainland edge, back over the Corfu sea – the unarguable shape of a plane, its headlight bright in the noon sun, appears at the end of the runway beside Kanoni.

I stroll slowly back to Arrivals glimpsing through windows the routine of getting from plane to concourse. Silhouettes assemble around the carousel. There’s Amy. I spy her.

And then they’re here. Such a heart-starting moment of joy, well hidden.
“Hi you. The car’s just a hundred yards down the road”
“He’s been crying the whole flight”
“Oh dear”
We bustle round the car, signing papers, fitting the child seat and then, Guy driving, we’re on our way, wending along Garitsa, along the corniche opposite the deep green of Vido Island, afloat on the jocund blue, before a hazy panorama of snow topped mainland peaks – the first day of summer; “πλησιάζει το καλοκαίρι” as Yianni said in the car park, aware of the need for a start to the holiday season and the harvest that long ago replaced olive oil, garrison wages and precarious rustic sufficiency.
Oliver still cries.
“I think he detests being strapped in" I said "When our children were young mum, me, nan or grandpa held them in the back. That’s illegal now”
“He’s had his routine disrupted” said Guy “they kept us an hour on the apron at Gatwick because the tech log was delayed. Didn’t start preflight checks until we were all on board”
Not much later, unloading travel bags from the car above the steps on Democracy Street, Oliver was settled In the arms of his nan, looking wakefully around at sharply dappled surroundings. 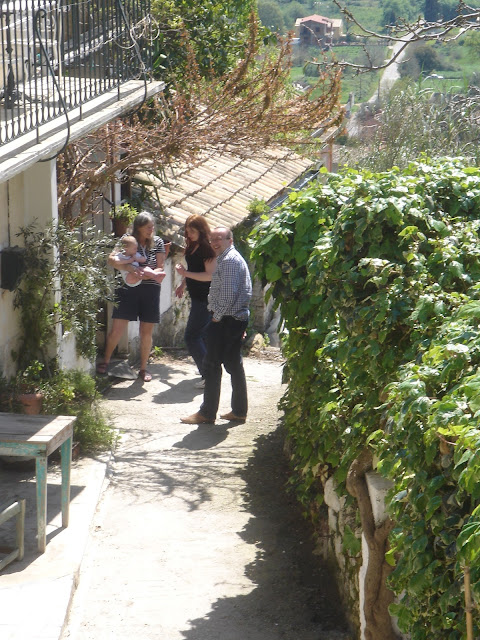 Will he, to amaze us in future years - as I do of times and places in my earliest childhood - hold in his head, like a still photo, a vivid memory of this visit that we won't believe possible?
In the afternoon we walked together to Ag. Isadoras up the narrow hair-pin bend road to Sokraki. Oliver slept for much of the ride. Later at Stammati’s Piazza for cold beer and pop, I relished neighbours’ chuckling over our grandson.
*** *** ***
On Saturday we went into town, wandering the narrow streets up to the Liston stopping at Picantiko for giros on a square off Nikiforou Theotoki... 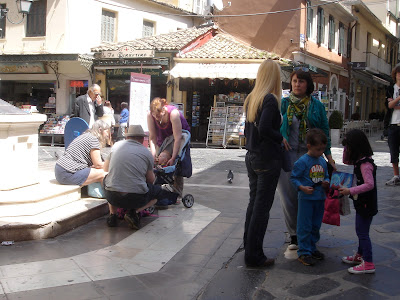 ... before visiting the playground in the Bosketto  garden above the sea moat. Here, with other parents and their toddlers, we sat and chatted and played with Oliver on a roundabout, a swing... 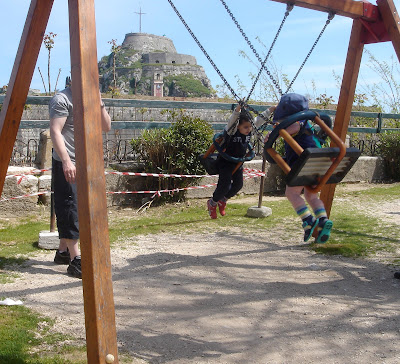 ...and a see-saw, until three young American dad’s arrived to play boisterously and irritatingly with a hoard of older offspring, unaware how the place had abruptly emptied of Greeks and their children. On the low parapet  above the sea moat Lin took photos of two lizards, one larger than those we usually see.
On Sunday we went to the seaside; a paraphernalia of things to be loaded in the car – snacks, blankets, umbrellas, books, a bucket and spade; then via Skripero and the narrow country road that goes through Doukades to Paleokastritsas.
“Couldn’t we have just taken mainroads?”said Lin
I’d been guiding Guy at the wheel and Lin, chatting to Amy and keeping an eye on Oliver, suddenly realised my choice of sinuous route to the sea.
“But look at the verges, the flowers, the olives groves and the meadows”
“And the potholes and cars coming the other way”
“Philistines”
“We’re not Philistines but if we go this way we’ll have lost the sun by the time we get there”
“Rubbish”
Guy edged the car through the narrow square of Doukades, descending the hill down to the main road to the car park and buildings below the cliffs of Paleokastritsa. Everything was closed, the tourist season, in the crisis, moved back several weeks. The sea was jocund, crystal, azure patched, shining silver patines between the towering crags at the head of the bay where beneath the bare horizon I glimpsed white caps blown by a sturdy north wind. Here and there the lovely Greek flag flew and rippled. We stationed ourselves with kit and umbrella on the sandy part of a narrow curving beach. A few others – shapely and not too white - were sunbathing. Lin and I bickered about nothing and were told to shut-up by Amy
“People are watching us”
“Yes but all I’m saying…” I went on, wanting the last word
“Oh shut up and stop spoiling things”
“But..!”
“No!”
It was all because the umbrella – very cheap – had broken and I accused Lin and she accused me. Why do we argue?
“It seems to me that we can avoid arguing if you would just admit I’m right”
“Dad for God’s sake…” says Amy
“Are we swimming then?”
We saw a couple of young Greeks dipping toes and hands in the water before returning to bask.
“Of course. We’re British” says Guy
Oliver was already in the sand, digging and testing.
“You’re not supposed to eat it” said Amy
“Is this the first time he’s been by the sea?”
“It is”
Shaded by the umbrella – now securely anchored after Guy had to rescue it from blowing topsy-turvy down the beach – Oliver was watched over by Lin.
In my bathing drawers I waddled into the chilly water; tripped over and yelled, splashing, floating and swimming until I got used to the cold and could enjoy showing off in deeper water. 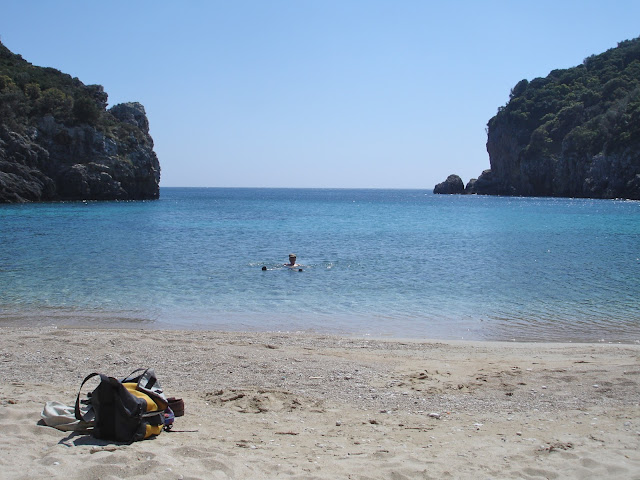 “It’s like England in summer” I shouted. Why is it often the British who shout on foreign beaches? Why me, who so dislikes such behaviour?
Lin walked Oliver along the beach his feet tip toeing then feeling their way into the wet sand at the water’s edge. Twice his little hat blew off, but the wind wasn’t cold. Amy and Guy swam too – more quietly than me. Oliver paddled with Lin. Sand, as it does, got into things. We had crisps and chocolate biscuits. I lay on my warm towel on the warm sand and read my current Dutch procedural - Janwillem Van De Wetering's Streetbird
"You do realise" says Amy "looking at the cover of that book it looks as if you're reading porn"
Later we decamped and visited the one truly lovely building in the place – the monastery perched above Paleocastritsa, inhabited by cats and dogs and a lone monk behind the counter of an expensive souvenir shop. The wind blew stronger and, by some trick of local topology, from the east, even as the serried waves on the sea shining and breathing loudly far below ran swiftly south.
The tunnel, alleyway and corners gave protection, so that the late afternoon sun continued to give us heat amid arrays of lovingly tended flowers and shrubs - violet wisteria, just sprouting bougainvillea, yellow gazia and jasmine. In the church I lit a candle for Oliver 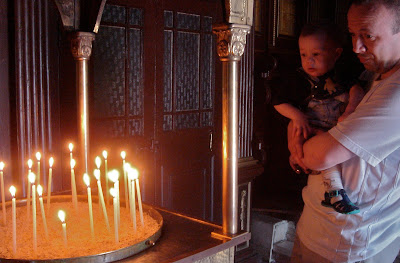 “You know” I said later, not that anyone was listening “I grouch about the blighting of Paleo, the tawdry shops and cafés, its hideous stacked hotel, but it’s really not bad to live just five kilometres from the seaside on both sides of the island”
We’d had a lovely day. What was I grumbling about?
*** *** ***
On the village website:

(My translation) As part of a UNESCO initiative to convert Corfu into an island of sustainable development (an initiative taken up by Ano Korakiana) an interesting Swedish film called 'As it is in Heaven' was shown  on Sunday, April 14, 2013 at 7.30 pm at the municipal school. The film describes the transformation of a 'typical' civil society to one characterised by meaningful relationships of trust, love and security etc. The running of a small community choir was at the heart of the project, revealing important aspects of human coexistence and the attentive forging of relationships. At the end of the film, there was a discussion involving distinguished guests, including the head of the island's Ionian UNESCO Centre, sociologist George Sclavounos and two psychologists.

*** *** ***
Down at the harbour at Ipsos, where she sits on the grassy shore beside the sea, I contemplate the transformation of our boat Summer Song, now with clean and deep blue painted hull with gold line and new name letters, cream painted decks and the start of a refurbished cabin along with new cockpit locker lids and cabin slides of sturdy varnished marine ply, a sanded, mended and soon-to-be varnished teak strake, new stanchion lines and, of course, her replacement re-conditioned engine - a 12hp Yanmar. All this work is down to Dave who has made it his special project. There's more to do of course, but he's replaced a damaged seacock, added an anchor, replaced the stove connections so we can have cups of tea (for a start), cleaned out the engine bilges, and replaced the bilge pump. We still need a compass, but sitting in her cockpit this sunny morning I felt a surge of pleasurable excitement at seeing our old boat - well over forty years old with a history of adventurous travel - being made almost new. As Dave says "She's retro". We lowered her mast and replaced her running rigging two years ago, and the messy electrical circuitry has all been neatly replaced.
"I hope that new propellor is going to be large enough" observed Linda seeing Summer Song with her new shiny paint for the first time the other day. 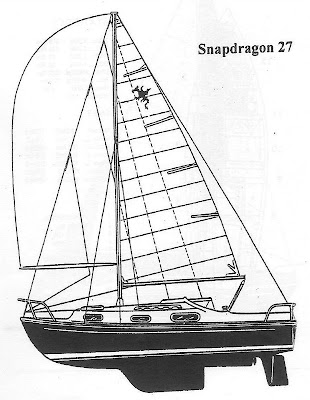 Without Dave this whole project would come to a halt. Yesterday he set out to deliver a 50 foot yacht to Trieste, four days sailing up the Adriatic, he reckons. About 600 miles - most of it likely to windward.
"I should be back in Corfu on Saturday" he said. 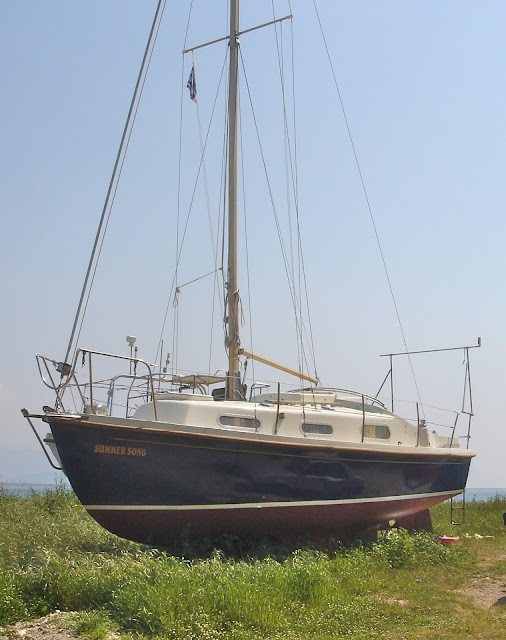 Email ThisBlogThis!Share to TwitterShare to FacebookShare to Pinterest
Labels: As it is in heaven, Oliver, Paleocastritsa, refurbishment, Summer Song, sustainable development, UNESCO