At about 1010 last Thursday morning I felt the house tremble slightly. I’d not heard nor sensed a builder’s truck passing on the street. Peering out of the French windows onto the balcony I saw Vasiliki exchanging words with Katerina at the railing at the top of our shared steps “Seismos! Σεισμός!”
A small earth tremor. Did it suggest more to follow? Had there been something larger further away? Vasiliki continued with her sweeping.
Such lines might have started a book; a tremor, a portent for another drama of the kind we watch on the screen, off a DVD or a book. I’ve been reading Antony Beevor’s D-Day: The battle for Normandy; about those who lived and died amid this stupendous drama. Beevor compacts and intensifies events. His account disperses the fog that enveloped the real event, both for security and the chaos of battle. Confusion articulated, with maps, becomes almost comprehensible. He orders things. Traces sequences. His narration is like The Iliad; the drama Homer made of battles that would have disappeared from history, juggling panorama and detail - the interventions of fate, luck and the strategies of leaders and the actions of individuals, the stench of dead bloated cattle, shattered buildings, cities in flames, the spilling of blood, grotesque wounds, spear pierced entrails, crushed flesh in tank tracks, small and bizarre incidents, technical details of weaponry, food and clothing that add veracity and excitement as a camera zooms in and out, pans and holds. My mother told me of how her train was stopped at Clapham Junction by bombing “I went the rest of the way home on foot, the whole sky over London lit by flames.” Giants lived in those times. We enjoy the petty tremors of peace; so does Antony Beevor and his wife Artemis Cooper, recent biographer of the polymath hero Patrick Leigh-Fermor. So also sightless Homer, who said he could only write – or dictate – because undistracted by the beauty of the world.

“Coffee’s ready. Do you want a Lincolnshire sausage and a fried egg?”
“If you like?” says Lin, still in her pyjamas. 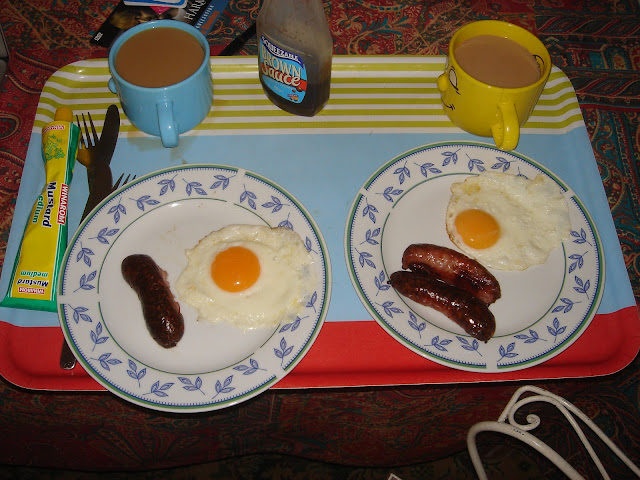 “I’ve pulled those palettes from the shed”
Lin had suggested their wood would serve as skirting for our bedroom, topped by moulded trim. Rather than risk splitting the wood by levering the palette apart I used a hacksaw eased between joints to cut the nails. Later I used a small punch to raise their heads enough to claw them out, before sanding a clean surface for Lin to varnish. 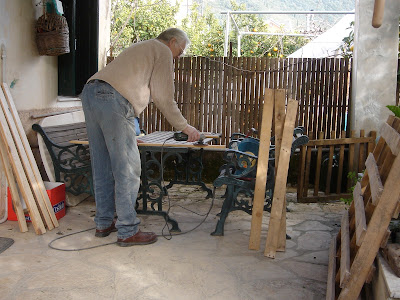 The films we’ve watched include episodes from the political thriller Homeland, from the Israeli TV series Prisoners of War.
“This stuff’s so seductively exciting. You can’t just watch one episode at a time.”
We watched a dozen 50 minute episodes in three evenings.
We’ve also watched episodes of Morse, new versions of Tess of the d'Urbervilles: and Far from the Madding Crowd, Lincoln, Prometheus, Flight, Django Unchained, Cosmopolis, Headhunters, Cloud Atlas, Looper, Shame, Killer Joe, The Impossible and - reading - we work through police procedurals from Italy, Greece and Sweden and catch up with news when we go to do our email at Sally’s in Ipsos and the Lighthouse in Kontokali. There are opportunities to hear the landscape, sounds with a different pace and without the organisation of programmed sound, whether music or speech.

There are degrees of choice.
“Don’t go into lecture mode” mumbles Lin
“No, no. Well. Yes. Books give you choices you don’t get with films. Without a book you've even more. With a book. I mean a story book. You can add in so many of your ingredients to the author’s recipe. You can imagine what people look like, how they sound when they speak; what places look and feel like from descriptions in words. In a film, vision completes things, colour, sound, look, and even timing and pace.”
“On a DVD you can pause and come back another time”
“Yeah, but not like putting down a book with a page marked. Coming back another day. Most films don’t last more than a few hours. You can make a book last a week or longer. Films compact time. They force the pace of a plot. With a good book you can even weave the developing story into the pace of the real world, wondering about it as you get on with ordinary things”
“The pace of ordinary life?”
“Most of the time it goes far slower. I've lived my whole life with millions of others safe beside a dormant volcano."
I envy those who can mark time with real time, seeing the drama of the quotidian, as Chekhov did, simply by 'looking out of the window'.
*** 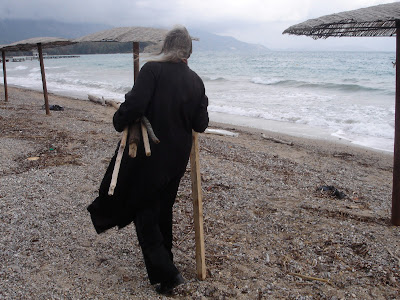 We collect firewood from the pebble beaches of Dassia and Ipsos, a medley of old joinery and windfall tree branches floated in from everywhere – olive, deal, plane, eucalyptus, bamboo, hard wood and soft, some almost rotten heavy with seawater - to bag, bring home, sawing longer pieces to fit the stove, using a billhook to splinter thicker logs, building a pile in the garden to dry and blanche in the heat of summer. 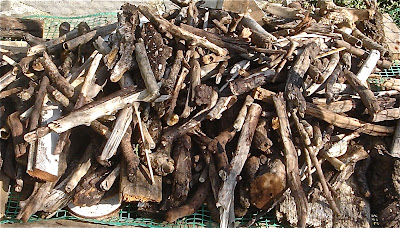 “We can only store so much like this” said Lin “we need to put the newer collections at the back of the apothiki to season there”
The apothiki is still full of building rubble not disposed by the previous owner’s builder. We’re arranging with Paul and Lula to get this removed; to recover the earth floor with room for at least a season of firewood and a workbench.
On Monday morning we went to the clinic at Pyrgi so Lin could get the stitches put in in the hospital at Torre del Greco, after her fall on Vesuvius, removed. How strange that she should have left her blood on a path around the crater of that amazing place. 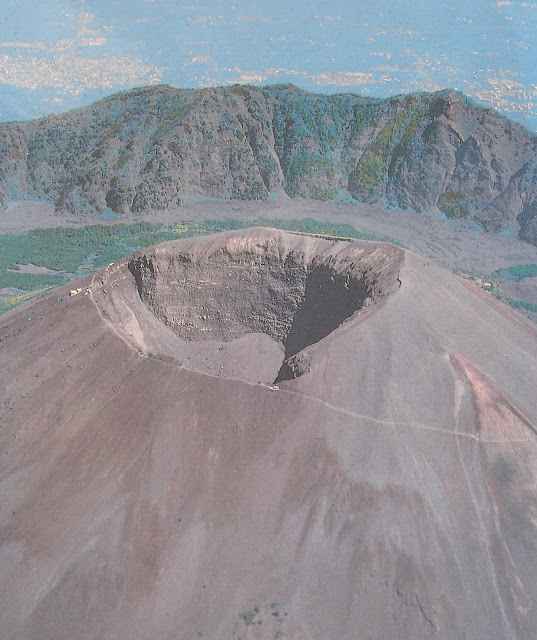