Who sweeps a room, as for thy laws 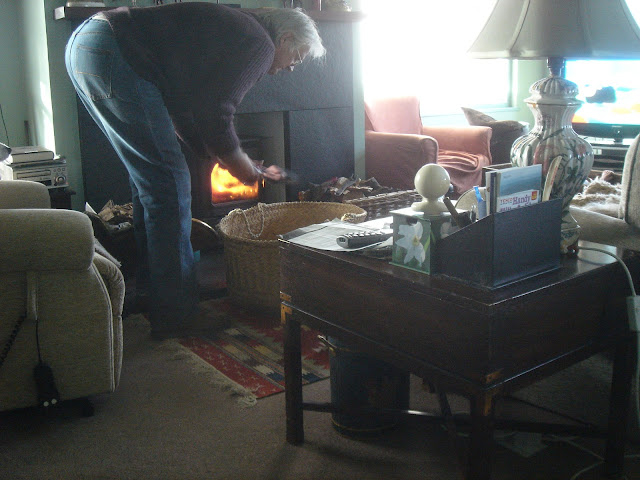 I am used to housework. I like the routine of lighting a log stove first thing, hearing it start to burble like a stream as the fire catches hold on the larger wood, as the sun rises over the mountains of mainland Greece and bathes the house in gold, and I can make shadow play with my shape on white walls.

The wood here is ready for the stove. I've made myself a cup of tea. A little paper, perhaps a firelighter and kindling - some dribbling of old ashes on the floor from which I've pulled back the carpet - then a match and gradually the winter that got inside is sent out again and something like civilisation returns as I sweep up round the hearth and tidy what was left lying about last night. At ghostless Brin Croft - 18 days after mum died here - I have always been fêted, by my mother when she was strong and her helpers and carers, to all intents waited on, free of drudge to think and talk and read and write and take long walks wherever I want with dogs for company.
Now there's a new routine. The heatings turned right down; we all share in housework; I sweep now and then seeking out hidden brushes and dustpans; working an unfamiliar vacuum cleaner into unknown crannies; learning the controls of the washer, once so taken for granted it's steady work was all but invisible. 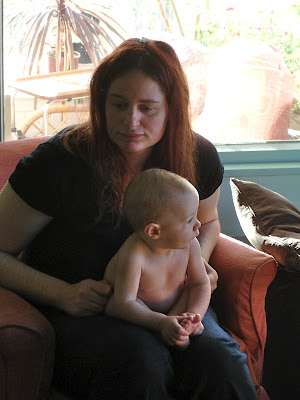 "There's a thing in the dryer"  said Amy, who'd left me briefly in charge of Oliver, chatting quietly to himself, while she had a bath
"A what?"
She showed me this plastic netted thing, a filter, having slipped it from the dryer that sits atop the washer, all unknown to me all these years.
"You have to empty it of fluff after each wash"
I've found the location of switches I've never used and learned where to find plastic bags, kitchen wipes, toilet rolls and dog food.
On several occasions I've shared the chore of picking up small gifts from one of the dogs, soaking up a puddle of pee with paper, spraying on stain and odour remover. I wonder if the dogs are anxious, troubled by a great absence, or just nervous when a human baby's around, to which they - the usual beloved small things - must defer in care and attention - to an even more beloved small thing; nervous because if Oliver reaches to give them an exploratory but ill-judged baby-squeeze their reasonable reaction of a warning growl is disapproved; even evokes cries of distress from the human primate. They're in a no-win situation. I'd be uneasy too. 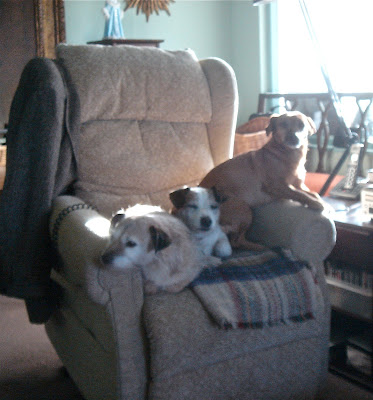 Of course I make myself cups of tea, even toast and now and then something a tiny bit more ambitious like a boiled egg, and I used, when here with my mum, to fetch things, missed in the main shopping by mum's carer, an easy errand to the local shop, using mum's car or the bicycle I've stored here.
Now files lie around - discreetly. Letters, forms, copies of things. Temporary lists. I'm supposed to be in charge. 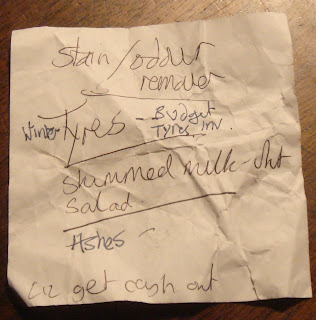 We've got our workspaces. I bring in logs and kindling. Just before mum died John cut down a birch near the house and sawed it into firewood piling its logs, as asked, on top of older dry wood. Birch is never good for stoves; sappy birch is worse. We didn't understand at first; had the chimney sweep in who left with a bag of soot and £45 but no improvement in the burning. I dug round the woodpile and unearthed older dry logs - seasoned hard wood. Now, though the real winter's not arrived, the stove rewards us. I've ordered another good load of hard wood cut to size along with a few months' supply of kindling - after checking round for prices.
*** ***
Robin whose allotment is next to ours, wrote condolences in his usual style:


Dear Simon. There are only two logical possibilities, namely a parent dies no later than their child, or a child dies before their parent. And which is the more regrettable, and which the preferable? At age 18, my father had no other relatives than his 36-year-old single-parent mother, when he came home from work to find she had died (of a broken heart I may add).  Such is life! And if I myself were to die today, thanks to cruel criminal-abuse fate I would have no children or partner to commemorate my passing. Such is life! I myself have survived a whole stream of life-event shocks, more than I care to remember.  But my view is as follows. Nothing has really changed in the Baddeley universe this year.  Your mother was going to die on date/month/year anyway (and it's hardly a great surprise if a 90-something person dies). All that's changed is your awareness, such that you now know the date, and have for better or worse lived on to see the world afterwards. In my analysis and experience, vitamin B6 (and wonderful glutamine, etc) has a lot to do with this.  To adapt to a life-event a person's brain needs to adjust lots of connections. That requires a lot of vit b6 etc, and if there is a shortfall then pathology results such as was manifested by Queen Victoria and by Mendelssohn after his sister's death (relentlessly grim last quartet in f minor (my answer to people who say "I like listening to music"!):
Anyway, I hope this makes sense! Meanwhile Cheers, Robin (and are you planting winter beans? - ive not been to plot for a monthish)

Dear Robin
You know that my mum would often stroll with me across the Victoria Jubilee Allotments while they were still barred to trespassers like us. She was deeply supportive of my campaign (with many others) to stop them being built over and enjoyed the frisson of entering them unpermitted.
My highly metropolitan mother - journalist and publisher and at one time War Correspondent for Vogue (actually just post-war in occupied Vienna)... 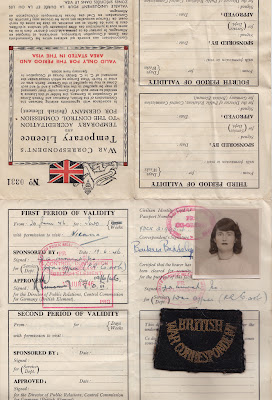 ...wanted also to be isolated - a little. Hence Brin Croft on the Farnack that runs just below this small house.
But you are right. A glacier carved Strath Nairn ten thousand years ago. 200 years ago the Clearances greatly slimmed a sturdy community of subsistence crofters in long houses and cot.
Over the last thirty years the city of Inverness, undergoing the same transformation that autodependency and diminished public transport has visited on cities across northern Europe, especially the UK, spreads like the old glacier, only much faster - its suburbs reaching relentlessly outwards, a centrifugal blight of ticky-tack  that blurs the old boundary between town and country.
It’s good for farmers who can sell parcels of land with planning permission and at least for a while seems good for the new inhabitants as their distinctive unvernacular two and three garage homes offer a sylvan haven on the heathered hillsides with a short commute into their offices or massive peripheral retail parks in the still burgeoning economy of Inverness and Ross.
Brin Croft is still just out of reach, 7 miles to the south of the city centre, a little closer to the edge of the creeping sprawl, but it already looks as you observe 'suspiciously like commuter land.’
Ask the local shopkeeper who watches frustrated as the supermarket vans go to and fro by her struggling shop delivering groceries ordered on line from homes across the Strath, their inhabitants no longer buying her papers because all their news is on the web. She was once also a petrol station and until four years ago a post office. Now the bay next to Inverarnie Stores has Highland Council recycling bins

It's not all bad. We have a Community Council. Fifteen or so years ago a fine community hall was built behind the shop (my mum was there for the Jubilee), and playing fields were laid out.

Local woods have been turned into attractive places for all to walk, small children and the disabled catered for, with signage added. In  one wood there’s a log cabin classroom teaching children from the thriving local primary school about the nature from which their contemporary way of living has so distanced them in mind and body.
I am up here a few more days engrossed in the dire details of probate. I read your letter of condolence to my daughter and wife, Amy and Linda, and Amy's friend Liz, who helped care for mum in her last month. We thought it was great! It has the same sound, if very different tone, as the sage Epicurus’ “Death is nothing to us”. I’ll think about those winter beans ...and what about winter onions? S 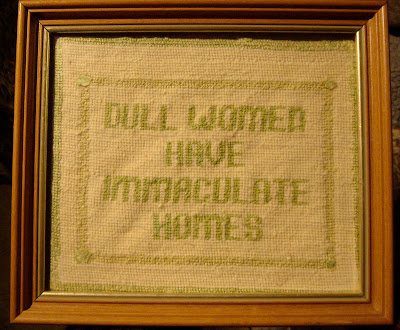 Last night we sat around and talked and watched dumb things on the tele' like Embarrassing Bodies, gasping in delighted horror at eccentric deformities; Frankenstein surgery to put things right; full screen public pubes in sinless detail;  ate supper - calamari with chips.
Oliver was skyped by his father four hundred and fifty miles away... 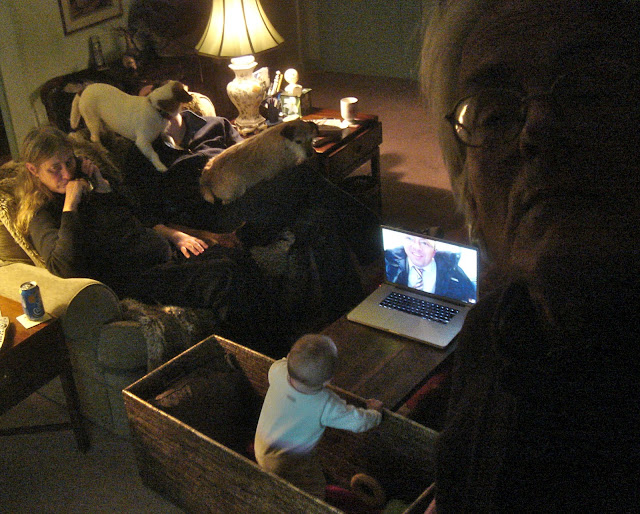 *** *** ***
Before I flew up again on Friday I was sitting in the loo glancing through an allotment diary mum had sent me two years ago. Out of it dropped a one-page note of hers, in which she mentioned the name of the son of a longstanding friend, a retired priest, who'd recently moved to Fortrose on the Black Isle. William Mather. I googled the name and place, got the number and phoned, He knew mum had died; remembered me, said as I started to ask that "It would be an honour" to officiate at Mum's memorial service in a few weeks. He's coming to tea Sunday afternoon at Brin, and dear Christina will join us too.
"Well get off the computer" says Lin "you've got guests and tidying up to do"
***** ****
It's 39 years since the Polytechnic - the anniversary yesterday of a popular rejection of the Greek military junta of 1967-1974. The uprising began on 13 November 1973, ending in bloodshed the early morning of 17 November after a tank forced the gates of the Polytechnic... 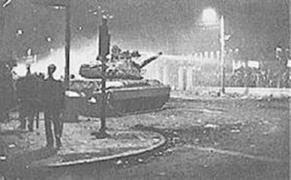 ...and a Greek sketch from today on trying to get a job (for English subtitles turn on captions beneath picture)