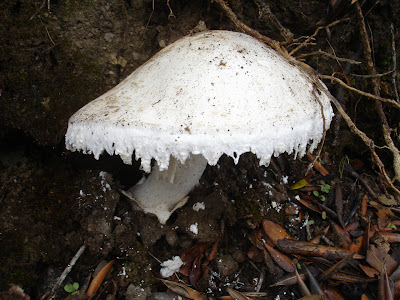 After midday on Sunday we ventured inland. The air was warm under a cloud covered sky. We stopped the car on a narrow road and walked on passing an orchestra of bells round the necks of sheep and goats that receded as we continued between hollyoak, olives, myrtle and cypress to the place I'd visited on my bicycle in the heat of early September. At a slope where the track headed north east we left it and wandered instead towards an old apothiki and pigsty among untended olives. 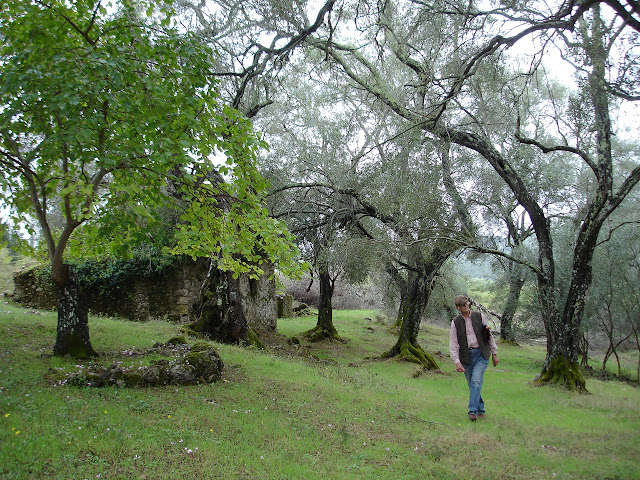 Cyclamen sprouted all about, fungi rising to the autumn damp and everywhere new greenery replacing the summer tinder. We saw no-one and the rain waited for us to finish our meanderings. By late afternoon we'd stopped at Emeral to enjoy ice creams, the rain now falling forcefully from an overcast so thick it was tricky to read a menu.
The noise of the rain drowned the conversation of fellow customers at tables under the awning protected in front by transparent pull-downs. Sheets of spray like bow waves were thrown up by passing traffic. A waitress with an order dashed across the narrow gap between the door of the shop and covered café. Now and then motorists arriving and departing braving the storm beneath umbrellas on the edge of turning inside out. No visible lightning, just the unwavering roar of the rain, and then – making everyone start and laugh – a massive lone clap of thunder right above us. A small hiatus in the rain gave us room to run to the car. With dusk the light increased; the sky began to clear turning a pleasant red to the west, casting a pink glow on the mainland. 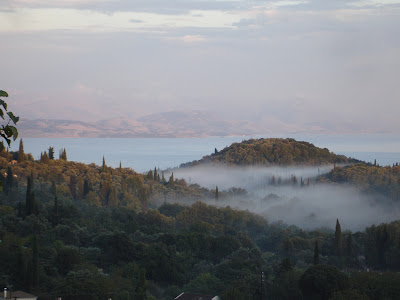 There was a concert in the evening of singing from the choir of Ano Korakiana’s fellow village, Kinopiastes Κυνοπιάστες, and after bowls of chicken soup and toast, we walked down to the lower road and joined a busy chatty audience in the spacious upper room of the Co-op Συνεταιρισμός, greeting people we knew, being edged, by a welcoming Dr Savannis, from a preferred place at the back to seats in front next to Pappa Kostas. Among such people in such a setting my natural rancour utterly dissolves and I feel relaxed and content amid community chatter, sheltered in the flock.
The accompanying guitarist practised; members of the Kinopiastes choir peered from the wing, actually a door at the top of the room, people involved wandered to and fro on preamble errands, and then the choir entered, the women in simple costumes – head scarfs, aprons and dresses, white stockings and black dancing shoes with short heels, lining up before us in two rows – twenty one people, with four men, one the choir master, on the edges.

Dr Savannis greeted everyone, and welcomed the guests, before the teacher came in to say a little about the songs we were to hear. The audience was ready to be delighted. The concert began. I was entranced.
Music is described only by music, song by song. I understood the sound; almost none of the words, though these and their tunes were clearly known to most of the audience who joined in the singing, though never to obscure the choir, whose beautifully crafted songs often began with lines sung solo by one or another of the women in the front row, accompanied now and then by gentle gestures that embraced the room, dissolving the small gap between audience and performers – though we all clapped happily at each conclusion and at the end – a swift hour and a half - both villages applauded together, and we slipped away, the happy cacophony of chat receding as we skirted street lit puddles.
In the night we woke to a prolonged storm – constant rain drumming about the house, spattering off the large leaves of the neighbour’s fig tree, pouring over the edges of gutters, splashing on the concrete alley, a constant rumble of thunder far and near, lightning flickering through the louvres, lighting the darkened house. 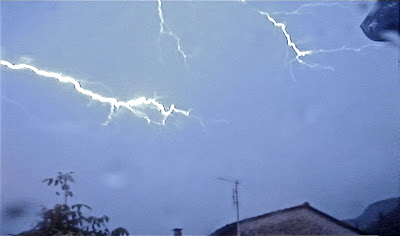 Watching the storm, Lin noticed an exquisite small creature that had scuttled into our hall escaping the rain. Touched lightly it hurried lithely under the door of the utility room - a nameless arthropod, more like a sea than a land creature. 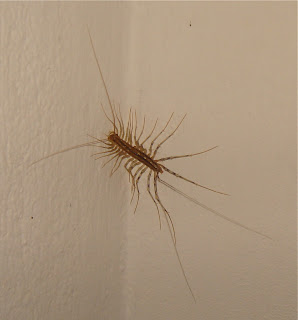 My friend Andrew tells me 'it might be a House Centipede (Scutigera coleoptrata) which has 15 pairs of legs that are longer than most centipedes. It's a predator of household pests e.g. cockroaches etc so generally considered a useful critter to have around.'
*** ***
I have been tidying up the minutes of the last meeting of Handsworth Helping Hands, asking Lin to fill in blanks in my notes from memory. Getting ready for our next meeting later in the month.
“It’s going to be an effort to get my head round all this. I can’t remember anything”

2. Consultation with Nick Reid (This item taken first so NR could get away): The Chair welcomed Nic Reid (Principal Operations Manager Perry Barr Depot, Fleet and Waste Management, Environment & Culture Directorate 0121 303 1975, 07920 750 213). LB’s summary of the discussion with Nic, with action points for review at our next meeting, is attached to these minutes...

4. Finance: LB reported that HHH have opened a new account at Unity Bank; that they will provide pre-loaded £200 cash cards. £1000 has been deposited in Handsworth Helping Hand’s (HHH) account at Unity Bank. Public liability insurance has been renewed with a company recommended by the Bank who specialise in social enterprise, providing cover on tools and vehicle, giving us five times greater public liability cover. Our vehicle insurance has been changed to HHH (instead of CHPCP) using the Beaudesert Road address. As agreed at our last meeting  we have spent £12 to provide a package of  tea/coffee/biscuits for staff at the Park compound. SB has been paid £20.51 for printing ink. We have not yet cancelled CHPCP’s account at Barclays, on the assumption that some cheques may yet be paid in that name.
We are looking for a good place to invest the cash we hold, other than HHH’s working capital.

5. Community Chest grant: SB went over the conditions of the CCG awarded us for 2012-13, including insurance, and guarantees of our compliance with employee legislation, statement of account for 2011-12 and transparency. SB has answered all questions when completing our ‘Condition of Grant Aid’ form.  As helping vulnerable people with securing their properties, window, door and gate locks, etc, is one of our aims, it was agreed to meet with local police in late October to get more information regarding security in 'at risk' areas.

7. Jobs: On 18 July there was the first of several hours' work over three days to clear and tidy the back and front garden of CMAT in Grosvenor Road and take green waste away for disposal. On 19 July the van was used to carry a gazebo and a table as part of the Cultivation to Consumption event at the Victoria Jubilee Allotments run by Aftab Rahman of Legacy WM and SB (add to this when approving minutes)

8. Training: It was agreed to decide on this at our next meeting.

9. AOB: Member of the community was criticized on local radio by a Cabinet member of BCC for ‘advancing’ his recycling box, having been informed by the council service it would be emptied over the weekend. The citizen would like a public apology from the relevant Cabinet member. This is relevant because the person concerned is a member of HHH which is publicly committed to tidying streets and encouraging responsible recycling.