A green orange will do

I phoned my sister in Scotland. She's with our mother. Mum said between sleeping
"Ask Simon to bring me an orange from Corfu"
"But they're still green"
"Then bring me a green one"
***
There has been a plethora of an especially vigorous wild flower - an annual I think. On our walks, we see it along verges, filling the heart of derelict houses, along the edges of pastures and waste ground. It has the special attraction of carrying flowers of different colours. We don't know it's name. 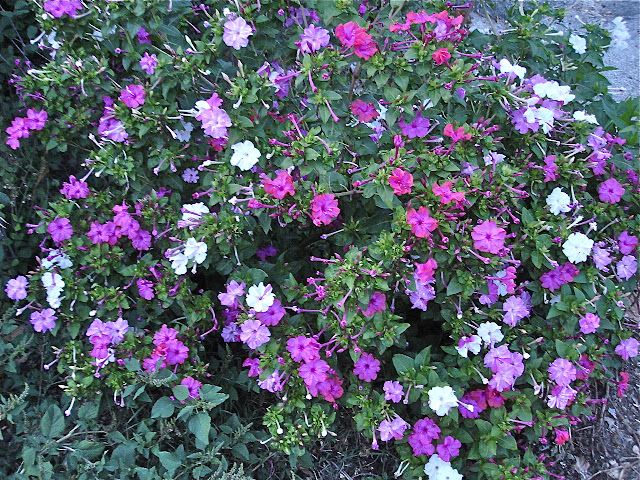 ***
In late August, just after we arrived, I was stung on the foot by a wasp, as I was hanging out a first washing. I thought it capricious until a day ago. I lifted the rickety little round table we keep wanting to throw out. Underneath was a lively next of long wasps. They'd stayed out of our way despite regularly placing the pegs and dried washing on it. That sting had been a mild rebuke after absence for entering a territory. I've been debating for years whether wasps are aggressive or defending territory differently from bees. I prefer as I think they do to live and let live, disliking almost reflexively those whose impulse is to eliminate the feral, unless framed by a celebrity naturalist.
Cutting back the higher reaching tops of the lemon trees and the orange tree in our garden, ones not bearing blossom or fruit, and reaching into the foliage came across a fine empty nest, that might have caused me grief if I'd pruned earlier in the year. As it is I may have these to thank for our heavy crop this year, with all blossoms on all three trees pollinated. Our bougainvillea has formed an arch across the alley so I'm leaving it there, pruning the vertical shoots. 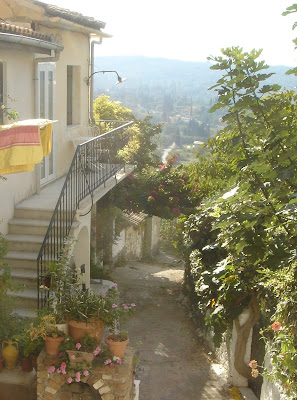 A few days ago Paul and Lula came over to take us out for supper at Strapunto. They'd come over to help with our intractable balcony made of wood with a the lovely view but drying and shrinking and expanding in the Corfu seasons. It has - perhaps - the legal advantage of being a 'temporary structure'. Were we to replace it with a proper balcony we'd probably have to add in the cost and time of getting permissions. One of the inestimable advantages of our friendship with Paul and Lula is that Lula's Corfiot, wise and knowledgeable about building on the island, gaining more understanding about our balcony and its supporting pillars - breeze blocks only - by tapping into the recollections of our neighbours who have seen the different things done to the house by previous owners. Of course it helps that Lefteris and Foti, his son-in-law, have both been builders at various times.
Paul has also promised to see about ridding our apothiki of all the rubble that got dumped in it when the previous owners allowed the concrete side balcony, which we had replaced two years ago, to be demolished in favour of one narrow internal staircase. The neighbours were more than pleased to see that rebuilt even better than before. "But" said Lula "that balcony on the end of your house, is the house" I know what she means. As with so many homes in Ano Korakiana this affords us not a view of the street from which to be nosey and say "hullo" to people passing, but a panorama of most of the centre of the island, the Kerkyra Sea, Albania and Epirus in mother Greece. 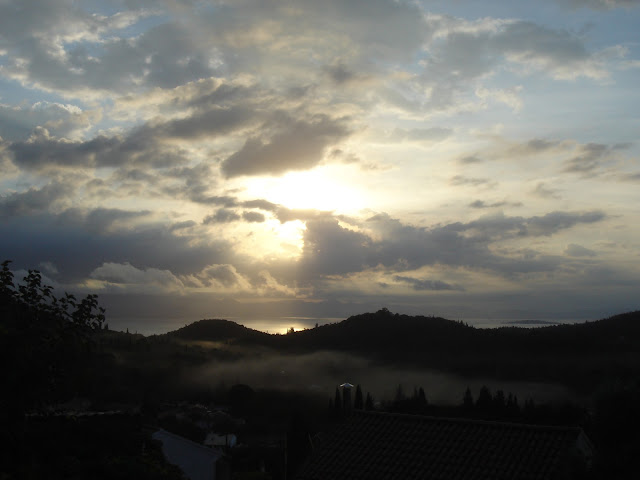 Disposing of rubble is ever a challenge in a tight packed village with narrow streets. Some of it went beneath the plaka that Lin has laid under the veranda and in our small garden; some to form a rockery and some went in small sacks, a few at a time, to a site near Tzavros where the owner displayed a notice requesting it for foundations he was preparing. It would be so good if Paul could get us a level floor in the apothiki so we can make what is currently a mess of firewood - logs and kindling - recovered window frames pieces of timber, lino, cable, rope, felt and odd containers that might come in useful one of these days, into a workshop and organised store as an apothiki is meant to be.
Posted by sibadd