The short municipal street, more an alley, that runs beside our house is called Κοινόχρηστη οδός, a generic title which, under municipal law, means a shared route 'from time immemorial'. I know it’s municipal because we have a street light attached to the corner of our house that turns on automatically at dusk. It also lights our balcony. The alley descends gently to the end of our apothiki, turns abruptly left and narrows to a weedy stony path. We have a garden gate, now painted, with oiled hinges, that opens to it. When we first saw the property this gate was so rusted and blocked by debris it might have passed notice. We asked the English sellers, a couple from Croydon, where the path beyond it led.
“We don’t know. We’ve never been down there”
It runs on downhill between our garden and a scruffy piece of fallow land dominated by a fig tree, brambles and bamboos, used as a place to dump trash that some people are too lazy to carry to the regularly emptied wheelie bins on Democracy Street. In winter the trash is hidden by greenery. In the summer, when this dries to fire-risk tinder, someone is paid to strim it to the rough ground – a task that here and across the village, and along the verges of its approach roads would have been done by a multitude of grazing sheep and goats aided by donkeys, horses and poultry.
There was a fire one night on the waste plot a year after we arrived; swiftly extinguished by neighbours before it spread. Though the scorched bark of a stunted almond is a reminder of the event, no-one seemed to know who owned the land, which by Greek law should have always been regularly mown to avoid such risk. Since then, the plot’s messy vegetation has been kept more or less under control, though for a few days, a couple of years ago, Lin was keen, without territorial ambition, to decorate the space with a Judas tree, dug for us from his garden by a friend in Ag Markos. It’s the only occasion when we have nearly been drawn into contention with our good neighbour, who suddenly spied the sapling, when hanging out washing. From inside our house we heard her calling with unaccustomed urgency
“Linda, Linda! Simon. Simon!”
She and her husband joined us on the path in embarrassed concern, pointing out in words and gesture that we must on no account continue with our activities on the derelict land. It belonged to someone; was shared by cousins. We at once removed the little tree and the small stones we’d laid around it.
A few months later a new anodised chain link fence ran down the opposite edge of the path that runs below our garden; a path that steepens and widens as it passes between two houses, one roofless, its core an inward collapse of beams mixed with rubble and weeds, the other gradually being improved with now a small vegetable garden where two ladies are often sitting out, swapping greetings with us as we pass. The chain-link fence beside their terrace is being replaced by a stone wall, built from stone recovered from the next door ruin by a local Albanian builder, who on one occasion has helped carry my bicycle over his work as I walk it up at the end of a ride. The path descends sharp right past the ruin, levels then joins a another path coming between houses further east. Here a few yards from where they join, a large cream coated dog is confined behind a five foot chain link. Our passing is some distraction. The stir-crazy animal, even before we appear, starts frantic barking, then as we come briefly in sight, hurls itself at the fence, snarling on the inbreath like a mad man spitting and cursing at anything that moves, leaping so its head and paws top the barrier before it falls back to try again and again, until we’re well down the next steep stretch of the path, close scored concrete, laced with exploring salad tips from brambles spreading from another unused garden, after which the slope lessens slightly past a steep terraced garden containing four beehives, and another, neatly walled, flourishing with tended shrubs, vines and flowers, to where we join the road that runs through the village below and parallel with Democracy Street. Οδός Εθνικής Αντίστασης, Road of the National Opposition – where there’s a nicely shaded bus shelter. 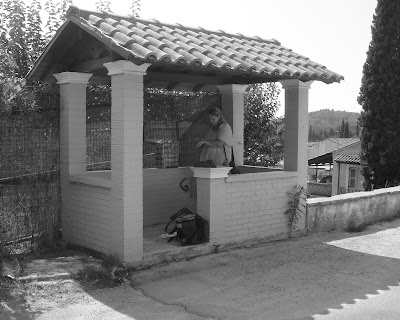 In summer the village gets four weekday buses into town via Ag Markos, Pyrgi, Ipsos, Dassia, and the dual carriageway south from Tzavros, at 7.20am, 9am,1.00pm and 5.10pm. The other way the buses leave town at 6.45am, 8.30am, 12.15pm and 4.30pm. There's a reduced service in winter, and one of the ways to get to and from the village is to use a more frequent service – one that runs on Saturdays too - between town and Sidari, and walk two kilometres to or from the Ano Korakiana turn off that road – well known to drivers. There’s even one Corfu Town-Sidari bus on Sunday which I guess would allow you a day by the sea up there.
I like buses. I wish we had more. I like the waiting – part apprehensive, part pleasant anticipation with the pleasure of hearing, or trying to hear, the bus approach, the ritual of boarding, paying fares - €2 per person to ‘πόλη, town, €1.60 to Ipsos - finding seats, greeting other passengers who may be familiar, being able to sit back and have someone do the work of travel.
Yesterday we went to Ipsos to do e-mail at Sally’s. Our return bus was supposed to arrive at the seafront around 4.50. An electronic sign predicted three buses, two to Korakiana and one to Porta, on their way, counting minutes to arrival until, at ‘0’, the announced bus disappeared from the board and further buses were predicted. The bus that did arrive, as noted on the schedule I collected two weeks ago from the city bus station, was ten minutes late, surging past us, braking twenty five yards beyond the stop.
These are the uncertainties of bus travel. Has there been a mistake, by driver or passenger? Is there a touch of grumpy malice on the part of the former, the face of the fare-taking driver world-wearied by a generation of disrespect for buses and the belittling of those presumed unimportant enough to rely on them?
Richard P who is entirely used to buses, between Perithia and town, tells of drivers on their phones for most of the ten mile journey along the often vertiginous corniche between Kassiopi and Pyrgi; that or a near constant stream of invective grievance about the state of world, for the benefit of one or two regular front seated passengers, amplified now and then by encounters with ill-parked cars beside the route.
I admire the panache with which our comfortable uncramped coach of a bus is manoeuvred between the sharp roof edges of the houses beside the narrow dog-legged road that goes through Ag Markos; the nonnegotiable meeting in the pass as a hapless car driver backs a hundred yards out of the village to let the bus go through.  One bus-driver meeting a car, necessarily steered by a woman unable to reverse or, perhaps, playing the ‘helpless card’, shrugged in mild patronage, dismounted, took over the car and did the backing for them. From Ag Markos our route to Korakiana is almost level and straight for two kilometres. The driver lowers a sunshade over part of his windscreen as he speeds us through a landscape of pure olive, blended, through the windows of the bus, into a spectrum that hovers between straw yellow and spinach green; penetrated now and then by the fiery dazzle of late afternoon sun, spraying us with hot sparks of light. 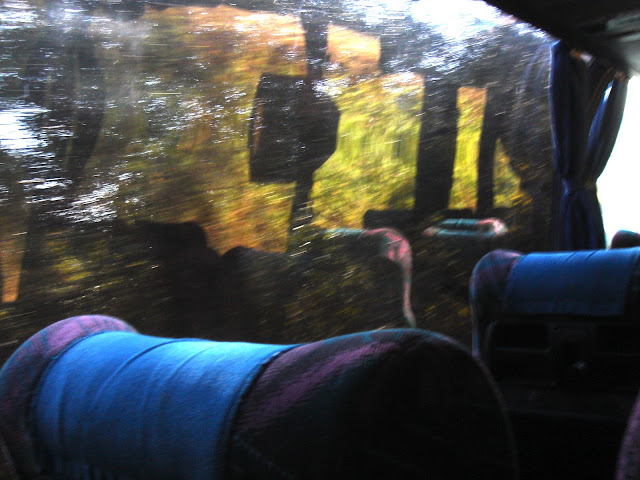