It feels like a sort of theft since Linda so detests being photographed.
"I don't like being called grandma. I don't like being called nan!"
I caught her unawares with our grandson two days ago when Amy came round so we could play with Oliver.
In his burbling way he's starting to try to make words. The wonder! Man the tool user; man who speaks; man who will walk on two legs; this astonishing set of senses processing experiences at inestimable speed, far beyond consciousness or future recollection but perhaps the intimation of memories of something enchanting, the freshness of a dream. Incognate understanding - seeing, feeling, tasting, smelling, hearing the new world; enveloped in unconditional love.
*** ***
On the allotment yesterday a touch of the feral, a vixen sat and stared at me as though affronted; so still I didn't see her until a red shape twitched in my peripheral vision and there she was beside a clump of redshank gazing at me, unafraid, out staring me before... 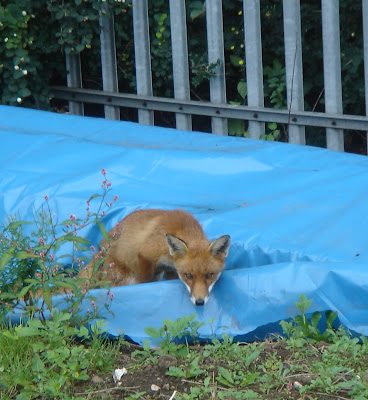 ...sauntering off through the same space under the railings between my allotment and the park, that unmistakable brush no dog sports that makes the name paused for a moment as she checked before leaving cover. I took her for vixen because there was nothing cubby about her yet she was slight and left no smell.
**** ****
There's a great chunk of railing and wall knocked out of the boundary fence by Handsworth Park gate on Hamstead Road, with skids on the tarmac and yellow smudgy police markers showing a track from the other side of the road. We'd been irritated the police helicopter hovering almost overhead beyond our street for at least half an hour in the early hours. Next day, seeing familiar twisted metal, rubble and brickwork piled up in the park compound, I asked what had happened... 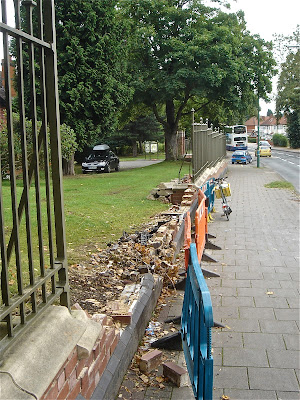 "It was two cars"
I'd noticed parts of vehicles in the rubble, the interlaced hoops of an Audi logo
"And a BMW"
"Insurance?"
"I doubt it"
"The driver was uninsured?"
"Deceased. There are no flowers. Odd that."
Flowers wilting by the site of a fatal crash is a habit here; our imitation of kandylakia; sometimes with a note of condolence from strangers. Nothing in the news.
"Apparently there was a lot of blood. Two cars - one chasing the other. Three dead."
Later I learned that the police would not disclose the vehicle registration numbers to the council so that they could draw up an insurance application, so this breach in the park boundary will go unrepaired for months, perhaps over a year.
*** ***
A plume of smoke from fires across Chios, born miles southward driven by a dry Etesian wind, passing over Mykonos, Paros, Naxos, Folegrandos, Ios, Kritiko Pelagos, the Cretan coast between Souda Bay and Rethimnon, drifting over her highlands into the Libyan Sea, spreading and dispersing above the deserted stone terraces of Gavdos, where summer campers may remark it on their smart phones. Men are likely to have started this and other fires across Greece. 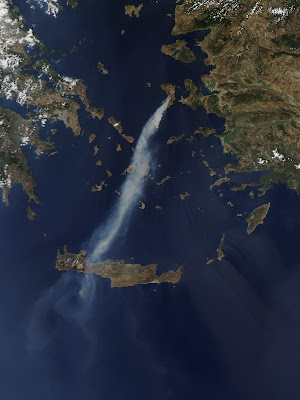 *** *** ***
Linda's summarised the results of a Handsworth Helping Hands meeting last week - with Nick Reid who oversees waste collection and street cleaning for the City Council in our neighbourhood:


Church Vale Litter Bins/Anti-Dumping Signage
HHH: What‘s happening about extra bins for outside the shops at Church Vale Triangle? How about the ‘orange bin’ theory? Could another sign, facing the pavement rather than the road, be put at the major dumping spot on the corner.
Nick: Bins have been ordered for by the shops at Church Vale. Not convinced about orange bins, but will look out for them. Yes, another sign can be put up.

Litter Bins
HHH: All litter bins seen by DF and LB on 16th August, en route from Putney Avenue to Turville Road, were full to overflowing. Looked like street litter – cans, sweet wrappers, etc.
Nick: Litter bins are often misused for household waste. Will review the number of litter bins in the area and the frequency with which they are emptied.

Mobile Cameras
HHH: What’s the possibility of having mobile cameras to catch fly-tippers in ‘hot-spots’ such as Church Vale?
Nick: The police have access to cameras, if there are any for the area. HHH need to speak to local police.

Street Sweeper (Cart)
HHH: Where is the street sweeper supposed to sweep and how often?
Nick: Will supply HHH with a copy of the route and regime.

Street Sweeper (Mechanical)
HHH: There have been reports of driver being seen sleeping when he should be working.
Nick: Mechanical sweeper is old – it’s off the road and awaiting repair at the moment. Will investigate sleeping on duty allegations. (There have been 2 dismissals recently for this.)

Annual Bulky Waste Collection
HHH: There is a great deal of bulky waste - mattresses, etc. - being dumped in the streets recently.  A lot of it comes from landlord-owned properties. When is this year’s collection due?
Nick: Unsure of date, but one is booked. The Councillors can allocate funds for an extra bulky waste collection if they feel it’s necessary. Cost is approximately £1000 (£3 per property) for a typical area.

Rubbish Collection Day Signs
HHH: Could rubbish collection day signs be put up in streets where people are putting rubbish out on the wrong day?
Nick: Yes they can. (But they don’t look very nice.  HHH: They’re better than the rubbish.)
Rats
HHH: There are reports of increased numbers of rats in the area.
Nick: Birmingham pest control service is free. Phone 303 6999.

Littering/Fly-Tipping Prosecutions
HHH: Have there been any prosecutions? Wouldn’t prosecutions be a good deterrent?
Nick: Birmingham prefers not to prosecute its residents and evidence which will secure a conviction is hard to get. We can’t prosecute anyway – it’s the Enforcement Officer’s remit. You could arrange a meeting with the Enforcement Officer. There may have been fixed penalty notices issued in the area. Will try to find out if so and how many.

35 Haughton Road
HHH: The rear garden is full of rubbish, which may present a health hazard. Residents are complaining. It’s a landlord-owned property.
Nick: Will speak to the Enforcement Officer about finding the landlord and issuing a notice to clear the rubbish.

Recycling
HHH: Some residents aren’t recycling. Report from resident of Putney Avenue that no-one in the street recycles.
Nick: Pilot of recycling ‘targetting’ being trialled at the moment, with leaflet distribution, boxes resupplied, etc. Too soon to tell if it’s been successful. If successful, could be used to target particular streets in our area. Results should be known in about a month’s time.

HHH to liaise with Nick and review progress in late October (approximately 10 weeks).

*** *** ***
By moving it again at Lin's suggestion, I've halved the monthly charge for storing the Out of Town films and tapes in the JH collection that John Rose and I moved from Plymouth to Birmingham in March. This time we took the collection it in the HHH van from the city centre to another store closer to home.
"When your in a white van you start behaving white van" said John engaging at the lights with another van driver on the subject of football, about which he knows nothing.
"Better start going 'Phwoah! Look at that!'" I said
Richard just smiled. We met Charlotte at the counter of Space Self Storage on Tyburn Road. Wandering around her desk was a Shih-tzu called Romeo checking visitors.
"Continuing white-van," said Richard "how about a KFC?"
The drive-thu was was half a mile up the dual carriage-way next to the Birmingham and Fazeley Canal, we ate on a grassy knoll by the water's edge.