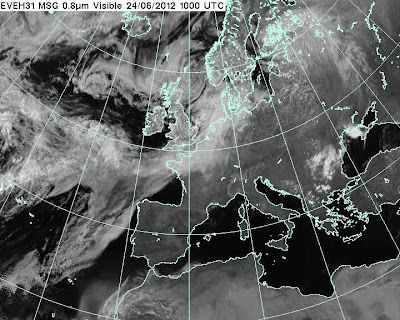 I flew back from Inverness. The jet went up and up and never quite broke out of the clouds. It's like having an animated conversation. Something in the background that's gone unnoticed distracts me momentarily is easily ignored but - continuing - begins to become irritating, until I'm forced to break off conversation and notice - the weather in June. There was a mild blue day or two in between relentless wind, rain, deep cloud that has run through the month. We need rain of course to fill aquifers and reservoirs across England. At the same time there are floods up and down the land, rained celebrations - the Diamond Jubilee weeks. Its the size and scale of these swings that suggest imbalance and the more our species in its fecklessness causes the climate to warm, the more uncertainty there is about how much warming there will be - a gift to those who'd rather believe there's no problem, that these variations are normal, that it's only the wettest June for a century. What an impossible task for a young science to send out warnings - like writing history on the basis of half a morning's conversation.
**** ****
Jim Potts on the blog Corfu Blues provides links to blogs by foreigners promoting Greece, including Democracy Street:


'From Corfu, Democracy Street, Simon Baddeley's blog (and its rich archives) is a treasure trove of  balanced Philhellenism, analysis and intelligent comment.

This pleasing flattery might be misleading since loving a place doesn't always promote it. Greece is infinitely more important to me than I could ever be to her yet I row with her as I do with my wife, and isn't it always her who starts the argument. The cartoonist Pont (1908-1940) would understand my views on tourists...
...and tourism - which Greece needs. This is a nice account of a short summer holiday on Corfu from the Buxton Advertiser - 'The Greeks are working hard to make your Euros work for you':


...Corfu may no longer be the completely undisturbed paradise which turned the young Gerald Durrell into a leading naturalist, but it is still one of the most beautiful places in the Mediterranean....

*** *** ***
Lin, Denise and I went, as reps of our voluntary group, to a rather daunting event in town...later i wrote to the MP Chris White who has successfully and against odds brought in legislation that may help us.


Dear Mr White
Handsworth Helping Hands is a small voluntary group based in central Birmingham which runs a transit van and holds a rich variety of power and manual tools and a lot of enthusiasm and a healthy control of transparent accounts.
We offer a free of charge, or reduced rate, small garden and maintenance service for vulnerable or limited means residents, moving furniture, cutting grass or branches, installing door chains and other security devices in homes and site clearances. We get referrals directly or from Councillors, Neighbourhood Forums, resident groups and local Police, and are known by word-of-mouth. We do street clean-ups and green space litter picks, having a refuse disposal concession at our local tip. We check eligibility for a free service but funding from grants or larger contractors like Housing Associations are required to help with costs incurred such as fuel, wear and tear and labour charges.
On Friday three of our group, attended a 'Meet the Buyer’ session organised by Midland Heart. An impressive programme of presentations led up to an overview of the EU Pre-Qualification Questionnaire (PPQ) and the Invitation to Trade* (ITT) procedures by the Housing Association’s Procurement Manager, John Crisp. We were ready to leave the event at this stage as it was worrying clear that there was absolutely no way we could meet the starting criteria to do paid work for Midland Heart and I suspect other agencies of this kind. We lack the capital, the equipment and the documentation required to go through a 6-9 month process. 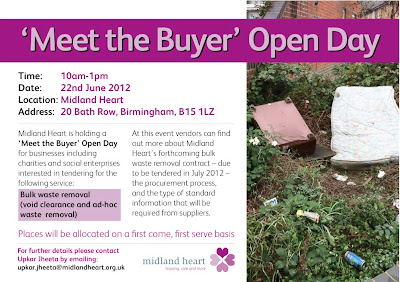 We fully respect the Housing Association’s need to set tough standards for those who work for it, and we believe that in our own way we have met good local standards on a mostly voluntary non-profit basis, using any funds received to pay for HHH’s running expenses - insurance, road tax, maintenance of tools and van etc.
John Crisp suggested we remain to hear from the next speaker Melanie Mills, CEO of Social Enterprise West Midlands. Melanie suggested that there was a tension between the requirements of the OJEU and the government’s wish to encourage organisations like ours. She then gave a brief explanation of your Social & Public Services Bill. We found this encouraging. 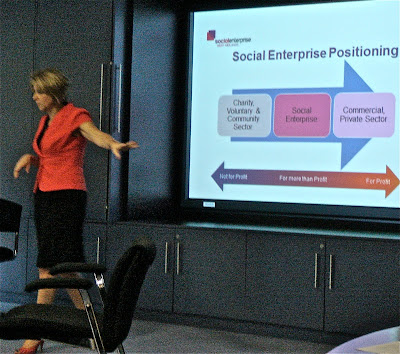 I am contacting you to try to get some idea of whether the Public Services (Social Value) Act 2010-12 offers offers modifications in current  procurement conditions that will allow an organisation like ours - with appropriate liability, appropriate H & S procedures and record of transparency (audited accounts etc)  will be able to bid for paid work with realistic opportunities of getting contracts that will help support our unpaid voluntary work? 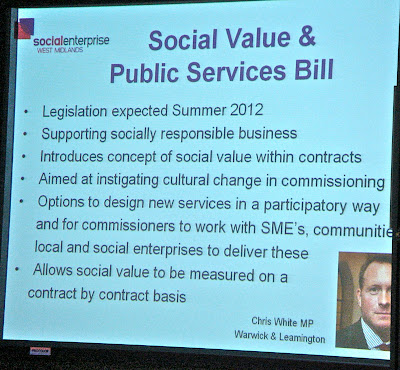 *or Invitation to Tender
*** *** ***
Dhiaa has communicated from Baghdad. My friend left Birmingham in December 2010 to serve for 8 months as a Minister of State in the Iraqi Cabinet. A devout Muslim he has never once questioned or challenged my lack of faith, and has often joined me in theological debates that matter within Christianity - especially the filioque schism between the Latin and Orthodox Churches. He managed - with gentle circumspection - to give me an explanation of the Christian conception of the Trinity. We looked at paintings in the Barber Institute and The Adoration of the Child Jesus by Rosselli which attempts to depict this enduring conundrum of three divine persons in one - ὑποστάσεις. 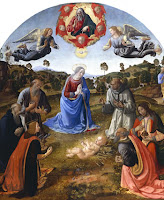 I have also begun- slowly - to understand the history of long differences between Shia and Sunni in Islam. From November last year Dhiaa's been Secretary General of the Al-­Ahrar political bloc - the biggest single political grouping in the Iraqi government. This account is from Niqash - a web newsheet covering all Iraq (Arabic). I doubt Dhiaa would use a word like 'oust'. His continuing doctoral dissertation, interrupted by the summons home - Shiísm, Politics and Development in post Saddam Iraq: A Study of the impact of Sadr’s socio-political ideas on the formation, roles and development of governance. I learned more in his first chapters than from anything else I've read on contemporary Iraq - and there's a lot. The complexity can be daunting, but his detailed draft left me breathless with the pleasure of at last beginning to see a way in which this might be understood, and more important, might offer opportunities for peace and stability...


(a tiny sample from a draft since revised)...Figures 1, 2 and 3 below show, the main faith groups possessing that possess power and resources in modern Iraq are religious Muslim Shiíte groups. These groups not only conflict with other non-religious, non-Muslim, or non-Shiíte groups, but themselves are subject for to various conflicts. These conflicts pose an insurmountable obstacle in the face of to the development and the rebuilding of the country. The main conflict is generated by, and around, different world views expressed though (?) by a diversity of discourses. These discourses have a common frame of reference and a common set of goals....

...The head of the Ahrar bloc in Iraq’s Parliament, Dhiaa al-Asadi, spoke to NIQASH about why he and his fellow MPS are standing behind a move to withdraw confidence from current Iraqi Prime Minister Nouri al-Maliki. The Ahrar bloc has 40 seats in Iraq’s Parliament and is particularly important because it is basically the political wing of the Sadrist movement, a multi-million-member group that follows crusading Shiite Muslim cleric Muqtada al-Sadr.
The Sadrist movement also incorporates the former Mahdi Army, a militia held responsible for much of the violence against American troops as well as the conflicts that nearly plunged Iraq into a sectarian, civil war following the 2003 US-led invasion of the country. Over the years, the Sadrist movement has disarmed and, as a political force in the form of the Ahrar bloc, has become a crucial part of al-Maliki’s current coalition government; it has also been engaged in community work and seems to be becoming popular with Iraqis that did not previously support it.
But now the Sadrists seem to be turning against the man who leads the coalition they are part of. In terms of current affairs, many have been interested to see the Ahrar bloc side with former political opponents to attempt to oust al-Maliki, a fellow Shiite Muslim. In doing so, the Ahrar bloc is on the same team as Iraqi Kurdish politicians and politicians from the Iraqiya bloc, a mostly Sunni Muslim bloc from the other side of the secular tracks...

'...there is a lot of politics going on in Iraq these days. Best regards, Dhiaa'  Sent from my iPad
Posted by sibadd