A problem - the promised playing fields

One of our most active ward councillors, Waseem Zaffar, sent a circular last week about a meeting this evening about youth provision in Handsworth.


Dear Friends.
Many members of the community and in particular young people living in Lozells, Birchfield and Handsworth have raised concerns with me relating to youth provision in the local area. Many have also asked about provision that will be available from the new MyPlace building to be opened soon located near the Aston Sixways Island.
Harry Fowler, the Head of Birmingham Youth Services has kindly accepted my invitation to attend a seminar and explain how youth provision in the local area is developing as well as plans for provision from the MyPlace centre. The seminar will take place on Wednesday, 6th June 2012 (6pm-8pm) at the Lozells Methodist Community Centre, 113 Lozells Street, Lozells, B19 2AP.
There will be an opportunity for those attending the seminar to ask questions. If you are unable to attend, but would like to ask a question, please email me waseem@waseemzaffar.co.uk and I would be more than happy to ask the question and get a response back to you.
Yours truly, Waseem Zaffar
Councillor for Lozells and East Handsworth Ward
Chair of O & S Committee for Social Cohesion & Community Safety
Birmingham City Council
Telephone: 01215513300
Mobile: 07790161889
Post: 16 Heathfield Road, Birmingham B19 1HB
Website: www.waseemzaffar.com 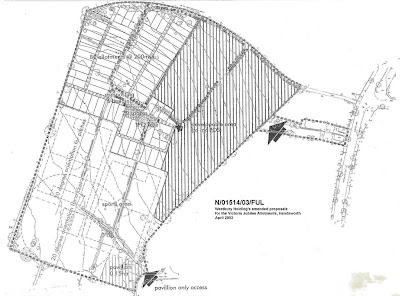 Dear Waseem
SPORTS SPACE ON THE VICTORIA JUBILEE SITE
It remains the case, despite a succession of explanations that go back over at least six years, that the playing fields and sport pavilion promised under the S106A concluded between the city and the developer in 2004 - N/01514/03/FUL - remain undelivered (see the plan associated with this application). The potential for youth provision of the Victoria Jubilee site (VJA) - for young people living in Lozells, Birchfield and Handsworth - cannot be over-estimated.
I understand that the developer - now Persimmon Homes - is forever seeking ways to evade the original conditons of the S106A concluded so long ago. I understand that objections by a vociferous minority of new homeowners on the Victoriana estate about the planned location of the children’s play area included in the S106A has give further excuses for delaying the larger project, as has the Council’s understandable unwillingness to be landed with the expense of a sub-standard set of playing fields and a cheaper version of the promised sports pavilion. The developer and the city are still arguing about these standards and the resulting deadlock is being paid for by all those young people who could be enjoying this space and by the community as a whole who face the collateral damage to social cohesion caused by lack of youth provision.
Forgive the asperity in my tone, Waseem. Forgive me repeating myself. For all the help you have been to the community of late this is the one issue over which I am inclined to feel you have not expressed sufficient anger or made sufficient enquiries into the relative spread of responsibilities. Now that we again have a Labour leadership in Birmingham, I hope you and fellow councillors will not only make your feelings known on this matter tonight, but pursue that matter even more conscientiously than you have so far.
My question for tonight is: When will the long-delayed provision for young people represented by the sports fields and playing areas promised under the Section 106 Agreement concluded in May 2004 between the City Council and the developer of homes on the Victoria Jubilee Allotment site between Holly Road and Hamstead Road in Handsworth be implemented?

You say you are more than happy to get a response back to questions submitted, but it is you and the larger community who should be getting the response. Of course I am interested in what emerges. if anything, by way of answers, but I now (at last) have my allotment. I now have no young family nor need for more exercise than I already get from digging! This is your problem. It is only mine in so far as I deplore the unfairness of this delay, given the surrender of scarce green space* from which the developer has profited without giving their agreed return under the S106A. Just to remind you again of the terms of that agreement:

I phoned Waseem to say I'd sent this letter. He said he'd phone me back in 5 minutes. He did.
"This is ridiculous" he said "we will do something about this"
He wrote, and posted at almost the same time he was on the phone to me, to the Chair of Planning and various others and asked me to come along to the church tonight to raise the issue.
"I promise I won't get angry" I said "but I am"
Waseem's letter with my letter to him attached, to which I've added job titles:

Dear Dick. Please see an email below from local community activist Simon Baddeley regarding an outstanding section 106 agreement for a development in my ward. How do we get about getting the developer to implement the agreement put in place some eight years ago? I am very concerned about this. Thanking you in anticipation.
Waseem Zaffar

*One of several films - this one by the BBC in 1999 - made about the campaign to prevent building on the Victoria Jubilee Allotments (VJA). Here's another - Losing the Plot - made by my friend Nick Booth in 2000, again focusing on the loss of urban green space to building.
*** ***
Later in the day Waseem copied me this letter to him from Ghaz Hussein, Development Planning & Regeneration Manager, BCC Ghaz Hussain Birmingham City Council


Dear Councillor Zaffar, l refer to the attached e-mails from Dick and Simon Baddeley. Although I helped negotiate the original S106 with the then developer (Westbury Homes), I have not had any direct involvement in this project for a number of years and given the time lapsed had assumed that the developer had met the necessary obligations. So it is a  little surprising to read Simon Baddeley's e-mail. I 'll therefore pick this up with my Planning Manager upon his return from leave next week to see how best we unlock the outstanding contributions from Persimmon Homes who have taken over from Westbury. I'll contact you as soon as I have established the state of play. Hope all is well otherwise and many congratulations on securing your Cabinet Member position. Kind regards. Ghaz Hussain

I got this letter on getting home from the meeting at Lozells Methodist Church. I said nothing at the two hour meeting. I was learning something of how youth provision worked, listening to an hour and half of questions to Harry Fowler, the Head of Birmingham Youth Services, who'd briefly presented a description of the soon-to-be-opened MyPlace centre in Aston... 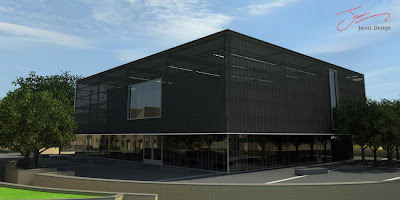 ...one of several £5 million buildings initiated by the previous Labour Government in 2007. Harry, a student of mine over ten years ago, told us that one of the challenges attached to this impressive building was the £350K annual cost of running the building, amid a funding famine. Harry spoke of the  work of the people involved, of the need for carefully selected partners, of finding a charging scale that was equitable. The meeting was uncontentious, all very grown-up and realistic about the world, and the several children there aged around 13-14 were attentive throughout, ready with intelligent questions.
As I took all this in I began to grasp a aspect of the problem of the delay in implementing the S106 Agreement on the playing fields on the Victoria Jubilee site. The capital side of the promised playing fields is given the agreement, but not the revenue side, and the scale of these - separate from other causes, explanations and excuses - gives pause for thought, indeed helps explain the delay in getting the playing fields up and running. Who will manage them, maintain them, organised their use, keep them secure, take responsibility for relationships with different users, decide who to charge for their use and how much users should pay...I need to understand this and take into account when lobbying on their behalf.
**** ****
Two hours on Plot 14. Tidying weeds from paths; planting runner beans and a marrow - between showers, which look to continue next week, while my mother tells me the weather in the Highlands is lovely. 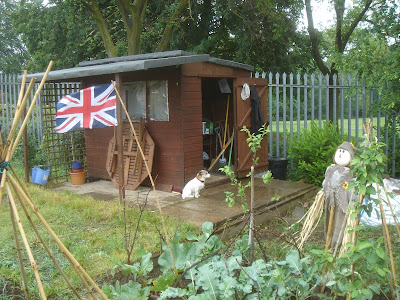 *** ***
The Greek Orthodox Church is strongly liturgical. Religious services are scripted, not improvised. Every ritual, prayer and genuflection is the tip of a theological iceberg. Faithless, in ways I don't understand, these ceremonies are embracing - especially now. I'm not alone. I recall the words:


...we may suggest that Orthodoxy in Greece may be better understood as a 'way of life' rather (than) as an attachment to metaphysical beliefs. Unlike what happens in other European countries, being a communist, atheist, or agnostic does not preclude someone from attending Church celebrations in Greece. This attitude of the Greeks towards Orthodoxy is graphically exemplified in the words of a Greek dentist as it is narrated by Ware*: "Personally I am an atheist; but because I am Greek, I am of course a member of the Orthodox Church"

In Ano Korakiana Nick and Sophia - του Νίκου και της Σοφίας Ζερβόπουλου - our neighbours up Democracy Street, whose son Antony's wedding to Georgia at St Nicholas Geronton in town we attended in April were at a service in one of the village churches, Ag.Triada, a small church nestling amid trees about a mile south of the village on a lane off the road to Kato Korakiana, to celebrate the Holy Spirit - του Αγίου Πνεύματος - celebrating Greek Pentecost - few days later than the Latin - involving the breaking of bread, specifically five loaves of bread...αρτοκλασία, artoklasia (artos - bread, klao - to break)...In the photo in red is the village papas Kostas with Dr Savannis standing tall on his right hand. 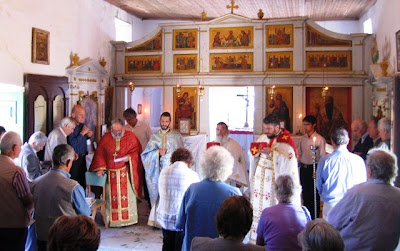 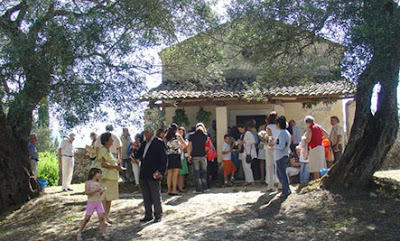 Yesterday morning a Matins Liturgy took place and later a Service held in the chapel of Agia Triada (Holy Trinity) on the very day of celebrating the feast of of the Holy Spirit. This year's celebrations were organised by the the family of Niko and Sophia Zervopoulos and almost all, bearing the name Zervopoulos, attended; some congregating on the forecourt of the tiny chapel, seeking the shade of the olive trees, since the chanting of the four priests and many cantors could be heard afar. The service also included the ritual of breaking bread led by Anthony Zervopoulos ...(Thanks to Aleko for help with translation).
*Ware, K., The Church: A Time for Transition, pp. 208-227, in Clogg, R. (ed.), Greece in the 1980s (Basingstoke: MacMillan, 1983)
*** ***
More and more this continental crisis, potentially global according to our public leaders, is about whether Europe should become a federation, its members pooling their sovereignty under an agreed rule of law (described by one cynic as a number of wolves and sheep getting together to agree what they should have for supper), with fiscal controls that apply across the Eurozone. The interesting paradox; that subsidiarity - delegation of power to the lowest place where the capacity to exercise it exists - may work better inside a supra-national federation, especially now that the smallest hamlet can be in touch with the world and we learning more every day about the working of villages - learning that can be shared without intermediaries between villages in Australia, Borneo, Korea, Greece, Iceland, Brazil, China, Egypt, Iran or Canada. These places are emerging in many places and they are in touch with one another advancing their understanding of the complex fractious challenges of self-government. A village is not just a clearly bordered cluster amid countryside; it can also be a reverse cancer within a dysfunctional autodependent city. See my Los Angeles friend Richard Risemberg's posting on Denver's good, bad and ugly. The process of making Europe into a workable federation may well be given a shove at the next European summit on 28-29 June. Angela Merkel is 'playing down' the significance of this meeting, anticipating that if any such initiative is to float its launch will last for ever.
Posted by sibadd