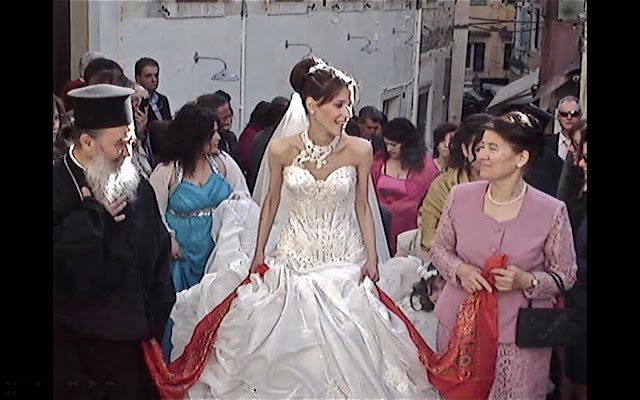 I was cycling down to Tzavros when I saw Mark in work clothes outside Sailing Holidays.
"I'm just going to post a letter and pay the electric bill"
"Now? It'll be closed"
"On Friday?"
"It's not Friday Simon" checking his watch to be sure as did I "It's Saturday"
"Heck! We're going to a wedding in town today. Bloody lucky I bumped into you."
I posted my letter and pedalled straight back to Ano Korakiana, to alarm Lin, get her wrapping our presents, get washed, dressed and spruced up for the wedding of Nico and Sophia's son Antonis to Georgia at St Nicholas Church in town. 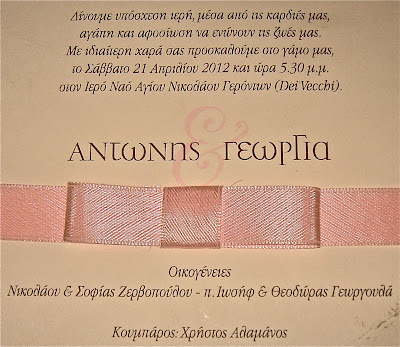 Luckily we had a couple of hours to spare. Panic subsided. By 5.00 we joined a procession of cars outside the family house in the village; followed close behind as they fairly whizzed down to park on the Liston. Like fools we thought the service started at 5.30 as it read on our smart invitation with a satin ribbon across the cream cartridge paper, but of course the bride's supposed to be late. She duly was - by at least 30 minutes, so we had time to enjoy the sun of an increasingly warm post-Easter day; outside the church at first, then in its dark-bright interior where we nestled in side pews with a canopy that shaded our eyes from the camera crew's flashing illumination. A gentle tune of lute, violin and accordion preceded the bride with her mother and father ascending happily and beautifully up the narrow cobbles to the church amid spectators, with bridesmaids, relatives and many friends in train. What a spectacular yet intimate event! Only our second Greek wedding in twenty years. 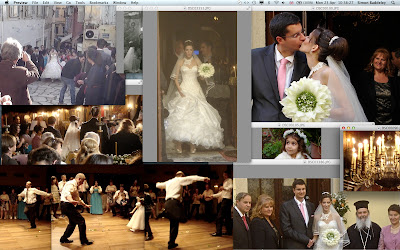 I'm sure I heard a fool say the Greeks are disorganised. Never was organisation done so impeccably. Yet it all looked easy, casual, relaxed, and even with delays (traditional and planned), it was like politeness, as opposed to mere etiquette, the kind of management that is invisible, that makes order seem natural and happiness something that just happens - as it ought.
Think of this! 300 guests at the Park Hotel... 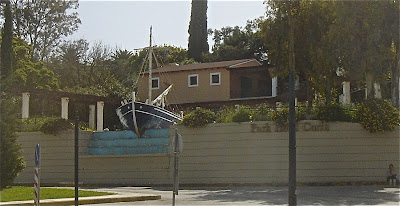 ... - the one with the caique bursting out of its frontage near Tzavros - mainly Greek, yet Nick and Sophia thought, and found the time, to place Lin and I at a table where we were sat next to a perfectly bilingual Englishwoman married to a Greek, so she could juggle chat with us while not having to abandon the rest of the table, whose English though better than our mangled Greek, was not as good as hers. Thanks Nick and Sophia, thanks Georgia and Antonis! Lovely to meet you Jill! And indeed all the other kind and funny and friendly strangers we encountered along with Ano Korakianers we are honoured to know already. Thanks too to Vasiliki and Lefteris next door for helping us write correct greetings on our small gifts, so that even we looked at least as if we were playing a full part in the celebrations. We danced and we watched the dancing and did not leave the hotel until 2.00am.
I'm amused that the church of St Nicholas of the elderly (Αγίου Νικολάου των Γερόντων, also San Nicolo dei Vecchi)  is up the steepest flight in town - but in fact the reference to 'elderly' is slightly innaccurate, γερόντων meaning 'the elders')