Things to do and done

My plate is full of things - of course Plot 14, several local government assignments, just short seminars; the next stage in transforming Central Handsworth Practical Care Project into Handsworth Helping Hands ...
and a new recruit to our advisory group in Rajinder Rattu and then - to our delight - an offer to allow us to park the tipper and store our rich inventory of mechanical and manual tools in Birmingham Parks and Nurseries  compound off the Holly Road gates of Handsworth Park, thanks to the trust of Gary McManus, Allen Broad and colleagues; my attendance with Denise at the Handsworth Housing and Environment Forum now overseen by Midland Heart, Jo Burrill in the chair; .... 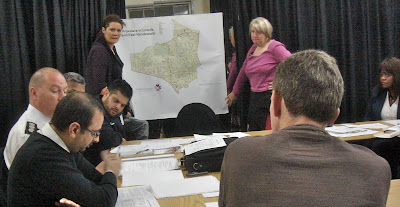 the incident that followed, that evening, when having borrowed Lin's car instead of cycling to Lozells Methodist Church, I got myself foolishly involved in a minor mudguard bump with someone whose BMW is their 'pride and joy'...

..so that Lin says "You can never borrow my car again"; my new involvement on the Supervisory Committee of the Handsworth Breakthrough Credit Union after a fraught but ultimately happy meeting, off Soho Road, ...
in which the Union has begun to pull itself out of a mire of local difficulties in hard times; a talk on Thursday morning to the congregation of Warley Baptist Church about the founding of Handsworth Park; ...
a meeting under the auspices of Inlogov's new Director Catherine Staite with Mari Davis to look for new areas of work - scrutiny and its role in helping develop localism (whatever that may come to mean); overseeing continued building work by Royston to make our home Rock Cottage in Lydbrook properly habitable; giving my 96th blood donation with the prospect I'll hit a hundred of these not long after my 70th birthday; preparing to be a grandparent of course; continuing the wonderful hopeless challenge - with Lin - of learning Greek under the tutelage here of Nikos and, in Corfu, of Aleko; our continued endeavours to save money by cutting down on heating, shifting suppliers of services - energy, insurance, telecommunications, and trying legally to avoid paying a penny more tax than we need to by assiduous maintenance of our domestic filing and recording of expenditures and completion - on line - of forms from HMRC, (this is us as the Pooters); keeping in touch with the nightmare tribulations of our dear friends whose just-18 year old son is on bail, tagged, curfewed and accused of involvement in a violent incident - his trial in late January. 'My wife Linda, a retired schoolteacher, and I, now a part-time university lecturer (previously full-time), have known B since he was born 18 years ago. We have seen him grow up to be a pleasant, good mannered, hard-working young man. X's parents, V and K, have given their son a stable, loving and supportive upbringing – one that has imparted to B a strong work ethic and a proven determination to succeed in his chosen career as a carpenter, evident in his commitment to his job and associated college work. In our experience of knowing him, B has always shown a mild, good-humoured temperament, with no indication of aggressive or violent tendencies. Both Linda and I would be more than ready to attest to B's good character in person, if required to do so.' (our note to the court that might have helped with the bail); my continued search for copies of my stepfather's films, some of which may now be re-released via a new licence, with attendant legal issues of my rights to control their release; ... 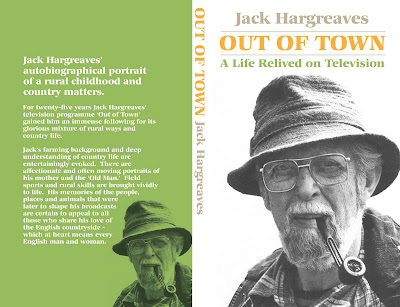 and now and then posting another film from those few I hold - this one about Mr Huskisson making a collar for Jack's horse Blue, that darling introductory music Recuerdos de la Alhambra, "Hello. What I love is to see something done by hand better than it can possibly be done with modern machinery"....

...looking out for an alternative way to look after dog Oscar in our absence now that John and Jo are finding this so difficult; Lin's current preoccupation with Arthur, her 90 year old Dad, who she's driving to Sheffield with my mum-in-law Dorothy, for an eye operation on Thursday. The nature of happiness in humans includes brief periods of languor, oblivion in sleep, constant endeavour with no obvious likelihood of success or conclusion, worries and uncertainty, occasional celebrations, good reading, constant learning, good food, friends and anxiety about small things. I guess that except for the reading that makes us not much different from other species. I left out the touching matter of intimacy - hazendo doz vezes con mi moher on grando pleasure to me and ella - because that's a regret I have about a blog as opposed to a written diary - that and having to be far more oblique diffusing gossip, slander, libel and confession. There must be someone out there who's got round this by encryption in the manner of Pepys.
*** ***
Everywhere the ground - lawns and pavements and gutters - are covered in dead leaves, some of which are unbagged by Plot 14 as future compost. I've come to like this time of year more than before. I'm not sure it couldn't be some poet's territory - Larkin? It's a scruffy time for gardens, the park and other public spaces; yet the details can be bizarre, even poignant; preparing for departure - but with time to spare. Once these would have been burned on bonfires. i liked the smell of burning leaves and their long smouldering into dusk. Now I wouldn't waste a fire. Leaves now go back to the ground not the air. Strange seeing Osama bin Laden among the plane, cherry, aspen and sycamore leaves fallen in our road. 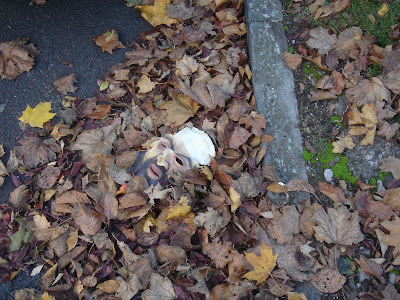 ****
I seem to have made so many journeys in the past few days between campus and Handsworth.  Compared to the road ride across town my journey goes via Richmond Road, Claremont Road,  The Crescent, up Goode Avenue, left along All Saints Road, over Pitsford Street, along Clissold Street, Clissold Passage to the towpath of the Soho loop canal that joins the Birmingham Mainline and so via Gas Street Basin to the Birmingham-Worcester canal (all without locks) running beside the main rail line to the West Country passing Birmingham University campus... 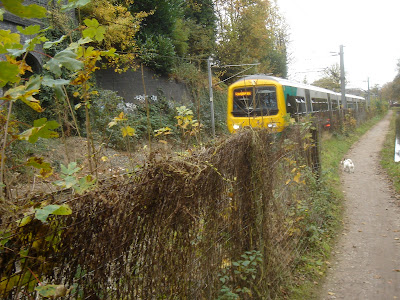 ...I shouldn't have it done it this way - get someone to clean my cherished Brompton's vital parts with a power washer but I pass this small business, on The Crescent in Handsworth, almost every day and couldn't resist having my man spray away several layers of encrusted dirt - a job that would take me near an hour, and ought to since I should remove wheels, chain and gears and do it all by hand with brush and cloth. All for £1. After the power wash I sprayed WD-40 generously, in hope of dispersing damp that might have got where it shouldn't.
I could describe much of what Linda and I have done over the years as voluntary work in the community - in fact our joint CV in that area - would look quite good but I'm not sure we would then want to be seen as advocates for the idea of The Big Society especially where this is a cover for cutting back on professional expertise in the provision of public goods at the ground level - environmental health inspectors, midwives, district nurses, gardeners, refuse collectors, park rangers, street wardens - or at strategic level in terms -  or people tasked with thinking strategically about service provision. Max Wind-Cowie at Demos is giving publicity to a recently completed report  on Britishness. This was just what we were debating last night at supper with Jill, concluding that being British was not talking about it; certainly not waving the union jack "We're private" said Jill. Wind-Cowie's less interested in defining than in understanding ‘practical patriotism’. Hm? Demos is launching a new report on patriotism A Place for Pride, with a debate featuring Lord Glasman on Monday 21 November. Max writes:


British people are proud of their country but don't see themselves as particularly 'patriotic'. The report argues that this dichotomy has been caused by a disconnect between political narratives of patriotism and ordinary citizens’ pride in Britain.

Notwithstanding Jill's point about privacy, there's an interesting piece in The Sunday Times. I find the quoted thoughts of Andrew Mycock, a reader in politics at Huddersfield University and a student of British identity, interesting:


“The way we feel about patriotism is very much a lived experience. Discussing kings and queens and wars is very abstract; we can’t feel an emotional tie.”....The poll (Demos') also suggests politicians’ understanding of what inspires patriotism is flawed. More than half of those questioned were proud of the contribution they made to society but many who took part in focus groups as part of the research were deeply suspicious of the big society initiative championed by David Cameron. ....The study, published tomorrow, accuses both the political left and right of failing to grasp the reality of modern British patriotism....Mycock said: “David Cameron and Gordon Brown were both keen to promote a type of Britishness that is abstract and lacking in emotion. Values and institutions are things we have no real sense of ownership over. Given the choice of things that make them proud, people will go back to their local communities." (Mycock last February on Cameron's ideas of Englishness)


...we must brace ourselves for many years of relatively low growth, perhaps 1% versus the 3% of the 16 boom years before the crash, because we no longer have the fuel of borrowing more and more every year.