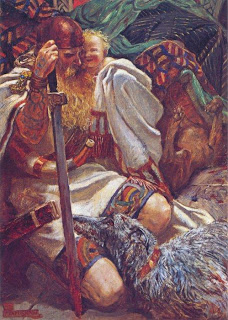 I have found that when depressed the telling of tales can be a consolation. Stavros sent a comment. I'd requoted Seferis substituting my country for Greece, 'wherever I travel England wounds me' -  <όπου καὶ νὰ ταξιδέψω ἡ Αγγλία μὲ πληγώνει> He could not have given a better reply <Αυτό που αγαπάμε πάντοτε θα μας πληγώσει&gt> 'whatever you love hurts you'. An apt consolation from a distant friend I've met only in cyberspace <Φυσικά αλλά ευχαριστίες, Σταύρος> So then I clicked to his story about Kukla, a Greek stray he remembered from long ago; read that and the comments that followed - all the tales about dogs I know and some I don't, adding one of my favourites - the story of Gelert. How Llewellyn, the prince who lived near the confluence of the Colwyn and Glaslyn in Wales, below Snowdon. came home to meet his missing hound and found him covered in blood, then found his child's empty cot covered in gouts of blood and in horror plunged his sword into the Gelert only to discover his son safe behind the cot beside the body of a great wolf killed by his faithful dog  - the consequences of abandoning trust, about love, loss of judgement and remorse. The legend's old, a parable, but notwithstanding its revival to bring tourists to Bedgellert, it has an edge that cuts through all such disenchantments and imputations of sentimentality.
Mark sent me pictures of puppies born to Tina sired by his black Labrador Teal, plus clips - one and two 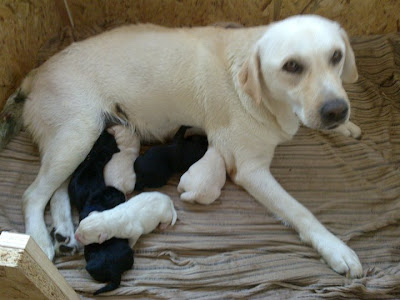 Three black and three white, just one bitch and the rest dogs.
And then I got a letter about a film of Jack's I'd posted on YouTube about rabbiting


I would like to thank you so much for sharing this, I have been trying to track it down for some time, my Dad is the young guy with blond curly hair and cap, sadly he passed away last week and he would have﻿ loved to see it again, but now I can see it you have made my day, Thanks again.xxx

Her letter. She lives on her father's farm but he died, and she must sell his horses, a pair I saw - a paint pony and its fowl and her lurcher, with Tilly 'the perfect running bitch':

Today Oscar and I, with a picnic, will catch a midday train from Inverness for the long journey home to Birmingham. Yesterday we were in Coignafearn beside the Findhorn. 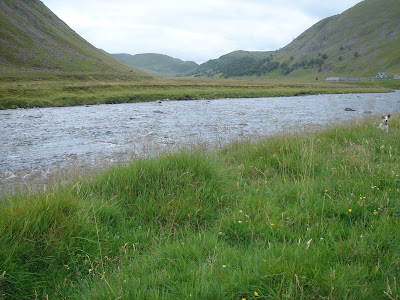 The wide river brings to mind John Ford, especially his cavalry trilogy, this the Rio Grande. As Oscar ran I collected puffballs nestled in patches of sheep-cropped grass; put them in my pocket to add to the chanterelles picked earlier in the woods above Inverarnie, to fry in butter with salt and pepper and lay on buttered toast for tea at Brin Croft. 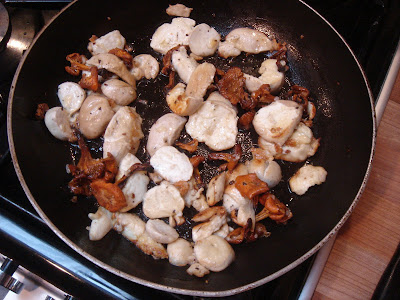 "You know" said my mother late at night just before she made her way to bed and after we'd been discussing when I'd come up again and the Maine books sent by Robin that she wanted to discuss with Minoti in September "when you have enjoyed so much happiness - travelled and seen and done so much. lived in special places and been with such fascinating people, and read and listened and never been bored for more than seconds, enjoyed so many many things, it is utterly impossible to understand what it must be like not to know, or even know what you have never known, perhaps only a little aware of an absence of the remotest possibilities. Wouldn't that make you go mad with despair?" As Russell Brand writes:


...and I had a mum who loved me, a dad who told me that nothing was beyond my reach, an education, a grant from Essex council (to train as an actor of all things!!!) and several charities that gave me money for maintenance. I shudder to think how disenfranchised I would have felt if I had been deprived of that long list of privileges. state of deprivation though is, of course, the condition that many of those rioting endure as their unbending reality. No education, a weakened family unit, no money and no way of getting any...

Having made two already, I've made another film of mum's memories, this time of Clavering, where I was born and spent some of my earliest years...

...and will start to edit it on the train, between reading Hal Crowther in Granta fulminating about the internet and mobiles and the social web. 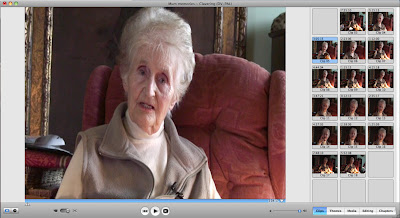 *** ***
In Skripero, four kilometres west of Ano Korakiana, they have been enjoying 'The Feast of the Frog' <Γιορτή του Κάρλακα> - the first time such an event has been celebrated - inviting neighbours and others from Ano Korakiana and creating interest in the surrounding area. Frogs seem to have been a familiar dish in Skripero for over a century, originally recommended by a group of Italian doctors concerned at local people's lack of protein, gathered from surrounding lakes, nourishing people in times of poverty. The organiser is the local schoolteacher, George Prifti, Γιώργου Πρίφτη. The event was free and well attended, held in the courtyard of the local school.