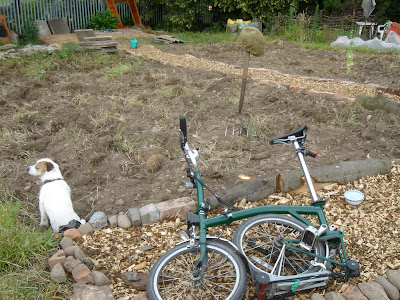 I finished breaking up the surface of plot 14. The dense carpet of dock and nettles and couch grass above and the roots below have been assailed, the surface ready to be raked and levelled, the uprooted greenery collected and barrowed to a growing heap from which we hope to get compost beyond the shed foundations. If I compare our progress to a game, it's like snakes and ladders, we've thrown the six, or if it were darts, we've at last thrown the double we need to start. That's a whole other game.  The books we read and the guidance we can get on the internet all help - in our case following Paul Peacock's podcasts rich with easily digested advice or chatting by phone to Simon at get-digging,  reading David Tresemer's Scythe Book 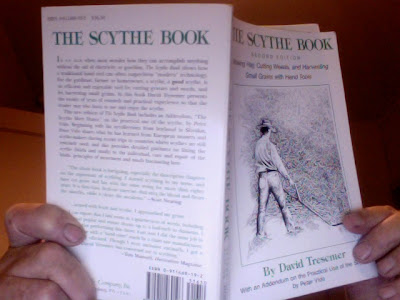 Far more gradually I can sense the seeds of another kind of knowledge, the kind of things some people just know; common sense - nous,νοῦς - that benefits from but also circumvents instruction.  I'm far from that. The process of work is itself a kind of lesson, one that includes frustration and disappointment. I've apprenticed myself to the Victoria Jubilee. The site is a classroom with teachers dotted around, most of them generous with guidance. It's like going back to school.
** ** ** 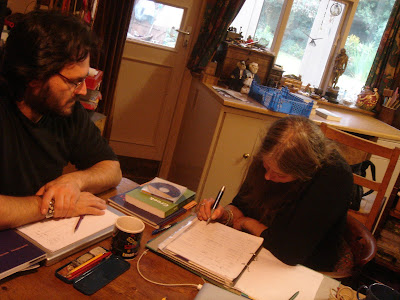 On Wednesday afternoon Niko was continuing our tuition in Greek. Linda was seeking a shorthand route to remembering how the form of a word changes in line with tense, mood, person, number, and gender, Greek being a highly inflected language. We were practising saying what place in what country we came from - Εγώ είμαι απ' την Ισπανιά, απ' τη Μαδρίτη - a line in our workbook, so I jumped in boldly with one that wasn't
"Εγώ είμαι απ' την Ήπειρος, απ' τη Ιωάννινα"
"Simon" said Niko "I would rather leave the improvisations until later..."
"?"
"..because, Simon" says Niko with his usual gentle patience "Epirus is a girl and Ioannina is a plural neutral"
"Sshhoot"

Before and after our lesson we gazed on a live feed from Syntagma - a scene like a disturbed ant heap of tiny figures, isolated and clustered, standing, walking, running amid clouds of tear gas, banners, flags, cameraman weaving between fragmented skirmishes, regroupings of police and protestors, masked figures lurking behind the uniforms.

ΣΥΝΤΑΓΜΑ 29.06 PART 1 by News247
The government of the Republic, as the world knows, has voted for a second bail-out., but disaffection and distrust seems to have spread far beyond the younger people of the city. What's going to happen now? For us it feels like a peaceful shore with waves gently rippling along the beach, while in the bars along the front big screens depict the havoc of distant tempests. Knowing of these things makes us watch the sea more closely. Was that last ripple unexpectedly loud? Are some waves getting slightly larger? Is there a rising swell? Is that only a local breeze stirring the seafront trees? What's happening over our peaceful horizon. There was that conversation in Adonis' and Effies' garden back in May and remarks by Paul when we with him and Cinta about places where it was becoming impossible to work on the island against a background of muttering about foreigners. Another small example is yesterday's comment on a YouTube clip of me testing my Greek, reciting Cavafy's poem Ithaca. The sea's wrong; but Aegean or Ionian, a point is made:

...the pensioner learns Greek so he can speak the language when he buys a view of the Aegean bought from the sale of our country - της χωρας μας. In a little while you'll learn and Μολὼν λαβέ (the famous quote from Leonidas which in English means literally 'come and get them (e.g our weapons)' but comes closer to the English phrase 'over my dead body' or the American 'nuts')


YouTube comment: @apsouuugitsesss Translation for people who don't speak Greek..(im Greek/Australian) "Look﻿ at what that son of a bitch did...the man simply told him to "leave the area", and he just cracked open his skull. You fucking cunt, coward..you think that a shield and a baton makes a real man. Prostitutes of the system, they fuck you and you even thank them on top!!