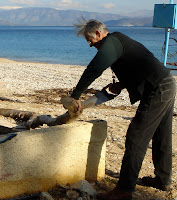 On Wednesday we collected more driftwood from a winter oasis below Barbati’s blighted sprawl of cloned villas, scarred earth and concrete skeletons awaiting cash part of me prays will fail to flow. We had a beach to ourselves, ripples over an azure sea barely stirring the pebbles; in the far ground – mountains and mountains. I sawed. Lin gathered kindling. Bags filled, we drove on towards the heights over the Corfu Channel down to Kassiopi strolling from the harbour along a path above the shore ending at a rocky pasture where three fine ponies were grazing. In the cities where I’ve spent most of my life I’m glad to see vestiges of countryside, tamed nature in public parks, tree lined streets and rich private gardens. Here the Ionian countryside can still overwhelm the despoiling energies of men. 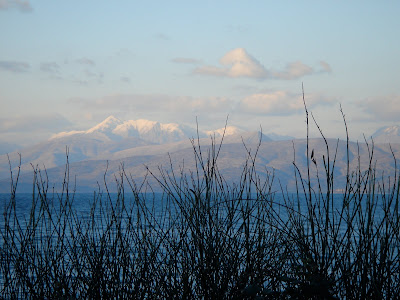 Albania from Kassiopi
* * *
We drove into town to Alpha Bank to sort out problems getting debit cards and PINs. Our address is not a postal address. Banks, unlike the electric company’s bill and the Demos’ water bill, can’t send card details to village shops. Getting cards and PIN together has been tricky. Cards came last September via friends who have a PO box but this is not always reliable when receiving mail to a different addressee. So no PINs.
I enjoy our Alpha Bank branch. It's in the poshest part of the city. We’d found an hour’s parking by the Spianada for €1; free after 1400. The bank’s high white marble interior is warm in winter and cool in summer. The queue at the counter is never that long. People are interesting, especially the smartly dressed, Junoesque, manageress who now welcomes us with a smile and beckons us to her desk with an authoritative “come, please” and copes efficiently with our fumbling deference as we sit together on comfortable, but slightly lower, chairs, before her immaculate desk. She's the kind of official who, were she searching our luggage at an airport, would overrule any concerns about intrusion with the strictest politeness so that after she’d satisfied herself - and us - that we were no threat to the security of Greece, we’d be thanking her for going through our belongings with such intimate thoroughness, even suggesting she check other parts of our lives.
“You have the cards? They were sent, yes?”
“Yes, but not our PINS.”
“They were definitely sent. The record shows."
“We think that the PO address didn’t work in that case. For the cards OK. For the PIN. No. Can you send them again?”
“No problem.”
“And can you include not only our name but the name of the PO box holder?”
“There’s not space in the computer form for two names.”
“OK. We'll keep our fingers crossed.”
Our bank book is always adequate for payments in and out at this and other branches, so the newish credit cards will, if they do at last become functional, make going inside the bank and meeting people there less necessary.
* * * 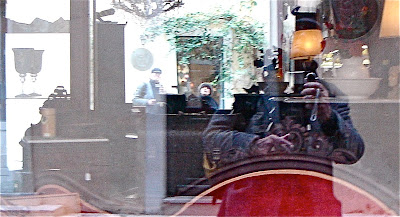 We strolled rich in time, looking at houses, shops, architectural detail – friezes, wrought iron door fittings, shutters, awnings, street signs, lampholders and posts, gates, plaques, windows, balconies, lintels, delicate joinery, curtains, plantpots, trees and climbers – old and new posters, graffiti, dogs, cats, statues, paving, kerbstones. I wanted to identify some buildings associated with government. We checked the Town Hall, a street west of Theotoki. An old porter reassured me this was Demos Kerkyrion – not the ‘Vourla Ionion’. The Town Hall is where Corfu’s governors deliberate, and where Jacinta and Martin were registered husband and wife after dashing downhill, her wedding party in pursuit, from the Ionian Parliament where a cleaner had told her – minutes before her registry office appointment – that they no longer did weddings at the Parliament. So how could we get to see the Parliament? At the National Bank of Greece that looks down towards the Town Hall a security guard said “It’s behind here. One more square”. Sure enough, after a minute’s walk the building stood before us, enclosed by parked cars. 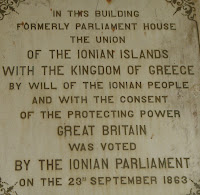 Its three front doors were locked but there were plaques in Greek and English that told me much of what I wanted to know. But how come Charles James Napier, often in disagreement with Maitland, described by Calligas as ‘the scrupulously fair’ Resident of Cephalonia, has recorded an incident where Thomas Maitland, his superior at the time, berated the Ionian Senate in his night-shirt. Energetic he was, but I doubted that, even inebriated, he’d walk half a mile across the city in his nightgown.
Behind the Ionian Parliament in the same building we found Holy Trinity Church, a large new Union flag, hanging outside. Ann, the duty warden, showed us inside – a small space, undecorated, serene.
From there we walked, window peering, along narrow streets we'd not seen before. In an antique shop I saw an 1850 print with maps of British ‘possessions’ in the Mediterranean – Corfu was listed with Gibraltar and Malta. It was priced too dearly at €120, and I’d taken the point about ‘possession’. The Ionian Islands were not supposed to be possessions or colonies but many British politicians and other members of our governing classes treated them as such.
Near Odos Theotoki again we had pies – mine spinach fresh from the oven, burning my lips. “I enjoy this” I said “One more errand. Let’s go back to the car via the Palace of St.Michael and St.George.”
Spread across the narrow sea's leaden horizon lay the mountains, more detailed than in summer. The higher peaks of Epirus and Albania were touched with snow over dark ravines receding into blue-grey haze. What a view from the residential quarters of the Palace. On a leaflet given me in the atrium of the Palace I noted a reference to the ‘British Occupation’ but also the fact that the building housed the Lord High Commissioner, the Ionian Senate and the Ionian Parliament. Of course the Senate was a small and more exclusive ‘upper house’ of Ionian politicians. The Senate stayed in the Palace, from where Maitland could have come downstairs from his bedroom. The larger Ionian Parliament moved to the other site. I’m not sure when. 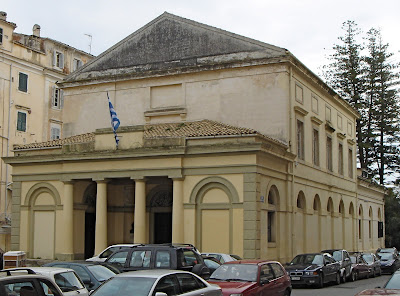 The old Ionian Parliament, Corfu
Lin drove home via the Beer Bucket to do email. Dusk was settling.
“Let’s buy giros at George’s.”
“No. We’ve got a stifado at Mark and Sally’s tonight.”
“Yes. Right. Yes. You do realise I’m half way through my Fred Vargas Lord have Mercy on Us All. What am I going to read next? I’ve left the rest in Birmingham.”
“I’ve picked you a Martin Beck from the bar book pool,” says Lin “it’s in my bag.”
I reach to the back seat and find The Laughing Policeman.
“I love you!” I say opening its weathered cover “What d’you think’s the first line? Go on!”
“The weather”
“In one! ’On the evening of the thirteenth of November it was pouring in Stockholm’. OK. I’ll put my last one in its place.”
We read for a while before supper then strolled up Democracy Street. 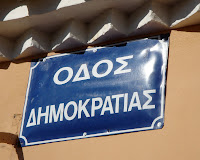 “Nico got the Demos to put that spanking new street sign on the corner of his house - ΟΔΌΣ ΔΗΜΟΚΡΑΤΊΑΣ. He told Paul he knew I’d be pleased by it.”
“You know there’s just these two shops left now”
“I do know. Hard work for them.”
Ancien Gil had bought a fish pâté to pass – a tasty blend of tuna, anchovies and unsalted butter which we passed around spreading on dry biscuits. We sat at table for the promised stifado - as good to eat as lobster. You do unhurried work, teasing away exquisite morsels of slow stewed rabbit from the bone. Our plates were generously supplied with shallots from the rabbit gravy, small roast potatoes and carrots. Then coffee, port, mint chocs and brandy and discussion – the economy, films too scary to watch all the way through, keeping a submarine in Gouvia to evade mooring charges, medieval detective stories, the lethal character of katabatic winds and the seacraft they demanded, Corfu history, absent friends, watching sunrise over the Pyramids in company with a bored Egyptian guide who wanted to talk about Man-U, our village, the success made by its owner of the only shop in Lydbrook, the local village that has said “stuff to OTE”, wired itself up with even “little old ladies on Skype”, the tedium of Twitter (“admitting to it will become as embarrassing as having a mullet haircut and bellbottoms”), the perfidy of the Welsh and the English - in equal measure. We also discussed where you put the cameraman in outdoor documentaries – especially those ones about survival in the wild or any supposedly realistic programme in which the individual talking to you from the screen is presented as all on their own in the landscape.
The sun appears over the mountains of Epirus

'...when the sun rises do you not see a round disk of fire somewhat like a guinea?' 'Oh no! no! I see an innumerable company of the heavenly host crying: “Holy, holy, holy is the Lord God Almighty!' from William Blake's A Vision of the Last Judgement 1806