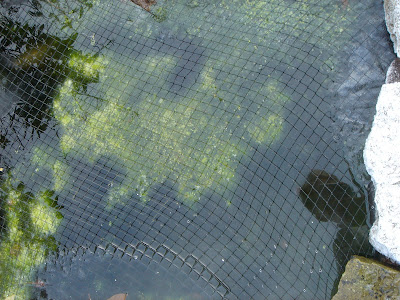 Our ponds are thick with ice you can't break with your hands and which mustn't be struck for fear of disturbing the fish; so water boiled to make a small hole so the Koi and Goldfish can breath. Birds peck nuts, from regularly filled dispensers that fool the grey squirrels. News filters in of disrupted travel on the roads of the prosperous south. Distantly reported troubles of others who you don't know adds warm schadenfreude, to mistletoe, holly, hot chestnuts, sunny frost rimed trees and a log fire, and it's nice to view cycling chic in Copenhagen.

I phoned Ian in Corfu. He's picked up the chimney pieces from Kommeno and will have a go at mending our stove pipe after Christmas.
While I pootle, Lin's shopping for Christmas, tidying and stacking things. Tomorrow she'll drive to Cannock to collect Dot and Arthur. I've sent few cards, received more; hung them round the kitchen. I've put a wreath on our front door, dug out the artificial Christmas tree, found a space for it in the sitting room, and gathered coal and wood for an open fire. There are fragments of chat on BBC Radio 4 about the platform ecology of broadcasting as different experts explore the complex shifting grammar of our electronic umbilical - new ways to maintain civil discourse in cyberspace, make or lose a lot of money and refine the delivery of pap to those unenthusiastic about political responsibility:

... the people who once handed out military command, high civil office, legions — everything, now restrains itself hoping fervently for just two things: bread and circuses.(Juvenal, Satire 10.77–81)

This morning after a request from SEEMP I put together a one-day seminar for a council south of London. There's a feel of election in the air already and people want their staff prepared.

MANAGING WITH POLITICAL AWARENESS
Seminar for xxx Council: 0900-1600, x January 2010
A seminar on the skills and values needed for working competently in a politically led organisation, that aims:
- to improve understanding of the skills and values involved in creating and maintaining political-management working relationships in xx
- to develop and fine-tune feelings for the boundaries between political, managerial and professional work in delivering high performing services
- to enrich managers’ vocabulary of political concepts and offer models of competence and integrity in politically charged situations
- to assist managers resolve dilemmas that can arise in giving impartial professional support to politically led agendas
Simon Baddeley, inlogov, will present general principles based on research and experience in local government across the country, to stimulate interest, as well as entertaining and encouraging those who need no converting, on the importance of managing with political awareness. Of course political awareness among managers should be matched by ‘managerial awareness’ among members – so xxx can combine the best of politics and management in pursuit of good government.
As well as short talks, handouts and points of reference on the web, Simon draws on a unique archive of film clips showing senior officers and councillors describing the way their work overlaps, while respecting the separation that marks good political-management leadership. While being entertaining, these films serve the practical purpose of enabling participants to explore the subtler elements of verbal and non verbal communication vital to constructing trust at the interface between politics and management.
PROGRAMME
Brief introduction - overview of the day
Reading the political environment of the Council
Constructing trust: negotiating the overlap
Discussion of film clips of member-officer conversations
Defining political awareness: skills and values
Work on ‘critical incidents’: facilitated by tutor
Summary and feedback: Q & A
Tutor: As an Hon. Lecturer at Birmingham University where he has worked since 1973, Simon Baddeley’s fascination is with the construction of trust between politicians and managers in making good government. He’s taught in Australia, Sweden, Japan, and Canada. He has invented many training approaches to this sensitive subject, including the ‘owl/fox/donkey/sheep’ model (co-author Kim James), and created a film collection of interviews with politicians and managers working across political-managerial boundaries. He does events for local councils across the UK on ‘political-management leadership’ and ‘political sensitivity’ for members and officers and carries out film research on political-management working relationships, and has just returned from a seven cities tour across Australia (an example) where he’s been co-tutoring seminars on political-management leadership for councillors and managers. He was a member of the 2005 SOLACE Commission, convened by Cheryl Miller CBE, examining the challenges of working in a political environment. Contact: s.j.baddeley@bham.ac.uk

And a Christmas email from Mark and Sally in Ano Korakiana:

Morning Simon and Linda. All well over here in Corfu, the weather has been mixed now for several weeks one day its like spring and the next it has changed straight back into winter mode.
I have been over to the marsh only on a few occasions because of the weather factor often it being too windy to cross over, with limited success but then every trip is worth it regardless of the bag at the end of the day. We are here for Xmas this year and had hoped to go away for new years but unfortunately not able to get into our favourite guest house. Spoke to Nick and Nancy just the other night...Missy their dog will soon be going over to them. That's all really , looking forward to seeing you both in the new year. Picture taken last year boxing day. Love to you both. Mark. oh nearly forgot. MERRY XMAS 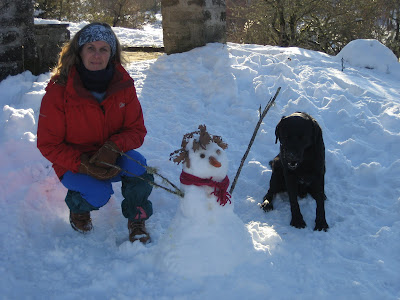 Sally, snowman and Teal in Greece
* * * On the subject of schadenfreude, I take no pleasure in Hellenic economic woe as explored in the FT and the NYT:


The Socialist prime minister, George A. Papandreou, has promised to fix the economy even in the face of resistance from his own supporters. But he has not completely convinced investors that he can shrink the government sector, which employs one of every four working Greeks (NYT 22 Dec '09)

[Back to the future: FT 6 Jan 2010: 'Commission officials grew infuriated with the Greek practice of sending misleading statistics to Brussels. Last year’s deficit was almost double the estimate made last July by the previous government.'

** ** ** ...and a clever and bitterly satirical viral of Jack Bauer interviewing Santa via TeacherDude Craig Wherlock. *** *** 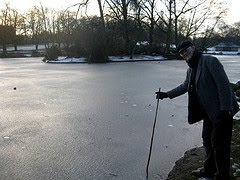