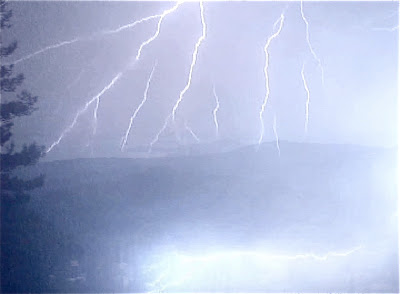 We’ve sat at the tables of friends and neighbours since arriving a week ago. A village offers proximity; what some want, and what some yearn to escape. Our first night home on Democracy Street we were sitting on a balcony at a table laden with food beneath a vine canopied balcony overlooking the darkened island. I’d climbed upstairs, burst on the assembled company, like a dog just released from kennels, tail wagging the rest of me. Kiss embrace kiss, arms outstretched, broad grin more kisses and handshakes

“Hi hullo hi, it’s so good to see you all. Hi Mark. Hullo Sally. Martin, Angela, hullo. Nick hi. Hullo Nancy!” - and a protest from little Estelle as my gross figure invaded her space.
“Sorry Estelle.”
“Slow down. Sit down. Have a beer,” said Mark

As we’d dropped off luggage at the house the Leftheris sat outside round joined tables finishing supper.

Later a night breeze let in through open windows cleared any staleness in the house. We slept without covers and let the fan work for us until we turned off the bedside lights, waking to the shifting sounds of radios, children playing, grown-ups chatting and a digger working on the lower road. To the shop for a loaf and milk but no cigarettes. “The police came. I have no licence.” The derelict space across the path where the cats roam and raise their kittens has been cleared and tidied for sitting out with a concrete path cleared, its stone margins painted white, a hammock slung in the shade of a walnut tree. Our garden, so bare when we left, is filled edge to edge with a hairy leaved marrow plant grown from a seedling bought in May and watered by Mrs L. The cats have multiplied – kittens mixing brindle, tabby and marmalade.
* * * 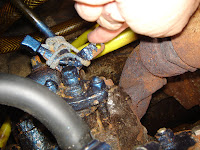 I went down to the harbour at Ipsos. Summer Song’s engine turns but doesn’t start. What is it with me and machinery? Dave, our boat’s paramedic, fiddles. “It was turning without compression.” The spring that holds a small lever to let the engine turn over had failed. Push the lever towards the bow. Turn the key. Engine starts. Despite the heat I set to putting on the sails, attaching the tiller, the sheets; put up the cabin hood; check the bilges are dry and the holes that drain the cockpit clear.
On Sunday evening came the storm, descending from the north west it bounced from Trompetta over to Albania, whose mountains hurled it back to the slopes of Pantokrator, and so forth, reverberating between mighty obstacles like a demented pinball. it descended with torrents of rain on the south side of the crags above the village laying on a display of lightning that compassed the sky, eventually rumbling off towards Paxos cuffing the mountains that got in its way.


Waiting at the bank in Corfu town last week we met Sophia from Ano Korakiana.

“Are you going to St Isidoras on Sunday? Every August on the last Sunday of the month. It’s the church on the way up to Sokraki.”

Sunday morning we rose earlier and walked through the village while it was cool, heading upwards through the narrows of little Venice. As we approached the seventh bend on the Sokraki road we heard chanting and so came to St Isidoras and to the door of the little church where a narrow mezzanine hangs over the road and we could lean on the sturdy spinach green railings for an hour as people of all ages came, lit candles, made the sign of the triple cross, bustled about the chapel, kissed the pictures of the saints – Isidoras and Fanarios. After the service the priests led a procession a little further up the hill to the boundary of Ano Korakiana and back. Tables and chairs were placed in the little square beside the church, invisible from the road, and cakes and coffee and sweet bread were passed around. A large man beckoned us to sit at the table. Places were made for us; plates brought. Another man who’s face I’d often seen at events in the village fetched us delicious custard pastries. “These are in honour of Saint Fanarios whose day was three days ago.” “Your name is Kirios...?” I asked “I am Mr Savvanis...gradually we are becoming friends." [Liana's translation from the village website tells me that Savannis is a name associated with Ano Korakiana since 1473, and I think I was speaking with Dr. Spiros Savannis, a paediatrician. Later note: Ano Korakiana's President living on the Platea, sitting centre left to the right of Pappas in the B & W picture] 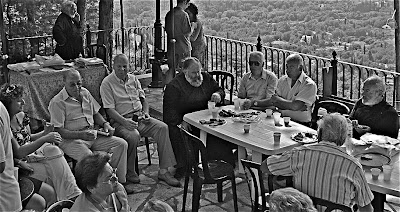 * * *
I am struck here by the familiar torrent of enraged and frustrated breast beating that has followed the latest fires in Athens which over four days devastated 20,000 hectares of forest and farmland and 150 homes in the expensive Athenian outer suburbs. The answers are here in the professional and managerial zones - prediction, prevention, staffing, zoning laws, inter-speciality collaboration, public education - but the gap between these measures and the political will and capacity to implement them is glaring. This is less about increasing managerial and professional competence though of course that’s vital, but much more on increasing political competence and capacity. 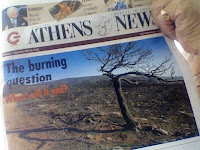 Law 3208/2003 in the Hellenic Constitution blurs the definition of 'a forest', suspending penalties for destroying forests and building on the land on which they grew. Some say the failure of the Greek polity to mature (and I should be humble following our scandals over MPs' expenses in the UK and vote-rigging a few years back in Birmingham) is because Greece has been for so long encouraged to play the part of a smaller piece on an international chessboard. Almost parented by greater powers, its political classes have never gained the momentum to abandon Greece’s history of suzerainty. When the Northcote-Trevelyan Report of 1854 introduced competitive exams for the British civil service, Greece had been independent for hardly 25 years, relying on a monarch chosen for them by the great powers. Athens had for centuries been a provincial town in the Ottoman Empire. If we are still struggling with the idea of government detached from the tribe, little wonder the Hellenic polity still privileges the nod and the smile that mark the grain of a village community; all the small gifts that amid the turbulence of the times, impart the sense of joining a larger family and the intimation that if you flow with that grain you will be protected and liked. The concept of professional neutrality and the mind-set that treats partiality with distaste even contempt and shame is far from being embedded here. Indeed it can seem like chilly detachment rather than a respected principal of daily conduct in public service. Jobbery's a norm. Clientalism, except among reforming journalists and diaspora Greek academics is not a tainted practice here. Patronage feels like reciprocity; favouritism a civil duty; nepotism a selfless commitment to family. Much that is wrong feels right. 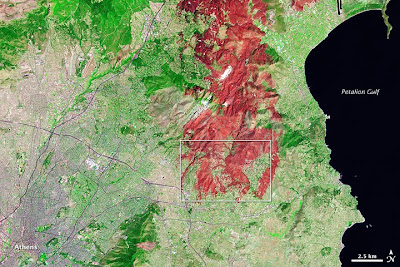 Letter on a forum commenting on this NASA false colour image showing the fire scar:

[Words on the fires from An American in Athens]
* * *
We were picking blackberries in the forest, eating as we went along. Ungainly – I’d clambered up a bank for richer pickings scratching my wrist on the hardened thorns of an old bramble coil, bringing up beads of bright blood. With one hand full of fruit, I slipped. My friend, one finger, similarly scratched, reached up and gripped my wrist helping me down to the path. Last week in England, Dhiaa and I were once again in the Barber among pictures made centuries before us to be looked at centuries after us. We stopped from time to time to discuss a picture’s provenance, the sensibilities of the times – scenery lying discretely, sometimes exquisitely, behind humans, who, over time, recede; even disappear, as landscape becomes the artist’s interest. Ruben’s Flanders was ‘picture of the month’ - a commentary for visitors telling of sun coming out after a shower.

“People have fought over this land for centuries – turning a lot of it to mud. It’s not as hilly as Rubens makes it.”
“There’s a man - hardly discernible.”

We peer at a farmer beside a hedgerow, locked, to the landscape by a few deft brush strokes. Trusted by the staff, we almost touch the precious canvas.

“Yet the country’s touched by humans; fields and hedges to the horizon.”

We looked at more unpeopled landscapes, marked by distant roofs, a hazy castle on a towering escarpment above cattle beside a ford, church towers or minarets, more meadows. Views like Wordsworth’s from Westminster Bridge. Kind pictures where the quiet of countryside matched the serenity of the place where we were quietly chatting, having as is often the case, the gallery almost to ourselves. I said

“Except for the news I have no images in my head of your country - its trees, gardens, marshes, rivers, highlands and desert.”
“I need to go back to Iraq for the next part of my thesis, to see people.”
“Can you not use email, skype, the phone?”
“Only so good.”
“I doubt anyone wants you to go” I said.
“That’s true and things are getting worse. The Americans are talking to Baathists who argue only they can rule.”

Dhiaa’s children’s English is coming on fast and his eldest had special commendation from his headteacher.

“But I have only so much longer of my grant then…”

Dhiaa’s sent me his completed literature review. We debated - as we do - differences between reason and religion; the evidence of research and of revelation; discussed my preference, my hope, that humans would be reasonable.

“But that’s why we arrived at the Absurd” he said gently. 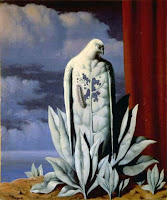 Dhiaa’s masters thesis from the University of Basra, one that won the highest of grades, was A Pragmatic Study of 'Directives' in Samuel Beckett's Waiting For Godot. In the Barber there’s a Magritte depicting grief, bought by the Barbers’ bequest after the 19th century fell into the 20th.

“You know that Mark Mazower’s proposition is that the 20th was only worse than Europe’s 19th because in its first half Europe experienced at the hands of its dictators what it had been dealing out to its colonies across the globe."

I mentioned crop circles to Dhiaa. He’d not heard of them. Rajinder who is comfortable with revelation has no doubt they’re man-made, while I puzzle, not because I don’t agree but because I don’t understand how people could be so clever, so crafty about being unseen when making such patterns.

“But people are clever” Rajinder said “They know they can’t make patterns with trees, so they use corn.”

I hadn’t thought of that. You can do a lot with corn over a midsummer’s night.
* * *
Paul phoned reminding us of Agiotfest'09 for which we've bought tickets. He mentioned that a piece I'd send to The Agiot about the Ionian Protectorate, about the tension within Ionian politics between the radicals who wanted enosis and those who wanted to see an autonomous Septinsular Republic, was in the September edition just out, along with publicity for concerts at Ag.Ioannis where we had wine with Lionel Mann last week.
Posted by sibadd