Kanun and the public law of Europe 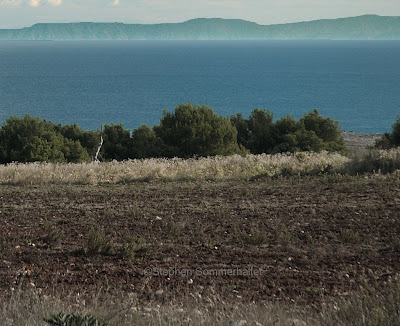 'a country in sight of Italy is less known than the wilds of America'
D'Anville quoted by Gibbon c.1788 Photo: Stephen Sommerhalter

Richard Pine, Director of the Durrell School in Corfu, has written in the Irish Times* about something new to me. His intriguing 'letter from Corfu' reminds me of a frequently repeated 18th century observation** that Albania, though visible from Italy, was less known than the interior of America: 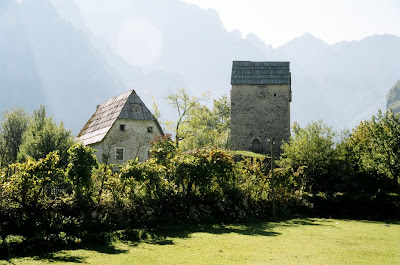 So Club Méditerranée have withdrawn from Kakome Bay, a few miles north of Saranda on the Albanian coast. A part of me thought that local villagers protesting against Club Med might have had an environmental agenda, but it was a long running complicated and divisive dispute over whether local families or the state had the right to profit from the sale of the land to build a resort, with Club Med agents unclear whether to deal with locals or the state Agency for the Restitution and Compensation of Property...


Drini Çano argues in stilted and stultifying Euronglish legalese that Albania’s incomplete property restitution process, under way for the past 20 years,  has violated the nation’s constitution and jeopardized its effort to attract foreign investments and accede to the European Union. To make his case, the author focuses on the Albanian Property Restitution and Compensation Agency (PRCA). Instead of a team of “administrative judges”, this is a board of potentially corruptible political appointees, a phenomenon that reflects on micro-scale the many pathologies of post-Communism.

As we approach important Albanian elections, on 28 June, the Prime Minister, Sali Berisha, speaks of flytipping and sewage problems damaging his country's formal application to join the EU.
To join the EU my colleague Gill Bentley tells me...


...applicant countries have to accede to the acquis, and meet the Copenhagen criteria, which includes such things as the stability of institutions guaranteeing democracy, the rule of law, human rights, respect and protection of minorities, a functioning market economy and capacity to cope with competitive pressures and market forces, and ability to take on the obligations of membership, including adherence to the aims of political, economic and monetary union (see).

Albania has various 'enlargement' projects in train, but see this, for example, on Tirana:

...estimated to be one of the most polluted cities in the world, behind New Delhi and Beijing...deaths due to illnesses caused by pollution have increased by 20% in Tirana in the past two years... respiratory system diseases came third on the list of causes of death last year. As Albania gears up to join the EU, pollution troubles get in the way. Albania is facing a humanitarian catastrophe due to growing pollution, 10 times above the tolerance level set by the World Health Organizations (WHO)....(ref)

Less public attention and equally, if not more problematic, is a different kind of pre-Islamic left-over that requires an understanding of Albanian - even Illyrian history - before the Ottoman Invasions of Europe - the lethal phenomenon of kanun. Uninformed outsiders may ask innocent questions about the stone towers - kullas - dotted around the country, unaware they were built as sanctuaries for the potential targets of blood feuds legitimated by the Code of Lekë Dukagjini five and half centuries ago - the basis of another Balkan 'big idea' - via the Kosovo connection. 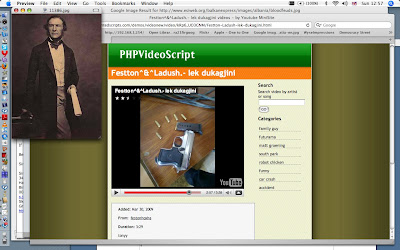 I was intrigued on looking further into this to find young Albanians (Shqiptarët), in our wired world, had continued the spirit of the kanun as hip hop, and I've just been told about the Albanian writer Ismail Kadare, who's novel Broken April I've ordered.


[see Tanya Mangalakova's paper for the International Centre for Minority Studies and Intercultural Relations (IMIR) THE KANUN IN PRESENT-DAY ALBANIA, KOSOVO, AND MONTENEGRO and this image and text]

As well as the EU, OSCE will presumably continue to give attention to creating and maintaining government in Albania' no doubt discussing her EU candidacy at the meeting in Corfu next weekend a hundred and fifty years after that twelve week visit to Greece by William Gladstone, a 19th century colossus of British politics. I’m studying his engrossment with the ‘public law of Europe’ via his extraordinary mission to the Ionian islands in 1858-59, seeing, in a biographer's words, ‘the Ionian microcosm' as 'a task worthy of macrocosmic devotion’. Richard Shannon wrote ‘it is possible to deduce much at large about Gladstone immersed in this small episode’, and I suspect it may be possible to find ‘much at large’ about Corfu immersed in what, for the Ionians, was a large episode in their 19th century history. 'In many ways, it seems to me, Gladstone's interlude as High Commissioner in the Ionian Islands encapsulates as well as anything his urge to hold the world in Peelite tutelage. ' (response to a review of his two volume biography of WEG). Gladstone, in his famous diaries, wrote of being utterly absorbed 'in the affairs of these little islands...The complexity of the case is inversely (so to speak) as the extent of the sphere.' (31 Dec 1858)
A very recent and welcome acquaintance, a scholar on Corfu, wrote to say 'He was like Durrell - a philhellene paid to do a brit's job - keep the islands safe from the Greeks, even though you know in your heart that enosis is the right path.'
This is going to be fascinating.
* * * I got news by phone on Saturday that Liz England has died. I dug out a photo (c.2001) of Liz - in the maroon raincoat on the right - when, as Chair of the Handsworth Park Association, she along with Dick Pratt and John Richfield, led our successful 12 year lobby for the park's restoration. 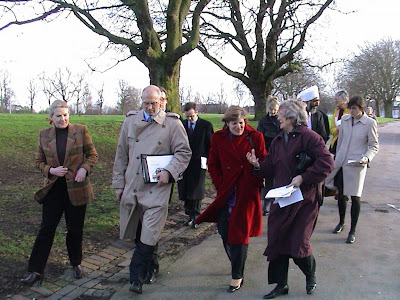 On the far left is Hilary Taylor of Hilary Taylor Landscape Associates who advised on Birmingham City Council's bid to the Heritage Lottery Fund and after its success oversaw the improvement work giving advice and making recommendations. The man centre left is Adrian Rourke, manager of Birmingham City Council's Landscape Practice Group who, over six years, co-ordinated the work of restoring Handsworth Park from preparation of the successful funding bid to the park's re-opening in summer 2006. I'm at the back, in a yellow top, chatting to a ministerial minder. In the red coat is the minister. I'm embarrassed that I cannot recall her name - her tenure was so brief. Liz, after being ill for the last year, died on 15 June 2009. She was a local hero, stalwart campaigner, politically astute, a friend and a good person. Her funeral will be at 1.00pm at West Bromwich Crematorium on June 30.
* * *
Εκτός από τισ τυφλέσ δυνάμεισ τησ φύσησ,
τίποτα δε κινείται σε αυτον τον κόσμο
το οποιο δεν είναι Ελληνικά στην καταγωγη
Meantime in Athens, sublime, wonderful, the opening of the New Athens Museum, another step in restoring the narrative of the contest between Athena and Poseidon.
The place it honours I knew from childhood schooling, on which I gazed on in 1957 through the small window of Yiayia's loo in her flat in Kolonaki after a train journey from London and on whose almost empty stone floor I walked that same April on a grey rainy day with my half brother George and Nigel Greenhill, son of the diplomat. As a paeon for Greece I know Maine's words are compromised by their context but they ring for me: 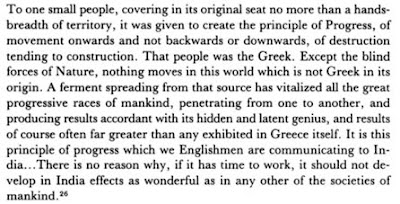 This quote is from Henry Maine's 1875 Rede Lecture - The Effects of observation of India on Modern European Thought - aimed at impressing upon a Cambridge audience the richness of India's contribution to world thought, through drama, comparative philology and mythology and the possibility that 'it may yet give us a new science not less valuable than the sciences of language and of folk-lore.' So Greece was a means, including the backhander - 'results far greater than any exhibited in Greece itself' - for Maine to talk of Britain's role in India.

[*I read Richard Pine's piece a week before it was published. A message from another informant suggests I learn about 'Arvanites and Qameria'. I am reminded of the scale of my ignorance. Yes I had heard of Chams but... ]
[Back to the future: see 'Albania: short on homework for joining the EU 15 July 2009]
[**This comment of Gibbon's was, so far as I can find, first quoted by James David Bourchier in the piece on Albania he wrote for the celebrated 1911 Encyclopaedia Britannica. It's in footnote 23 in Part 1 of Chap 32 of the fourth volume of History Of The Decline And Fall Of The Roman Empire (click footnote 23; search for 'Ambracia'). Gibbon relates a comment on Albania by the great 18th century cartographer Jean Baptiste Bourguignon d'Anville in his Memoires de l' Académie, tome xxxii, p. 513 - 528, illustrating the Gulf of Ambracia,


‘but he cannot ascertain the situation of Dodona. A country in sight of Italy is less known than the wilds of America.’

The Ambracian Gulf is by Preveza well south of Corfu. Dordona is level with Corfu but deep within Epirus. The reference to 'sight' refers to the view, on a clear day, from Italy, fifty miles over the fearsome Strait of Otranto to the 4000 feet mountains of the Karaburan Peninsular] 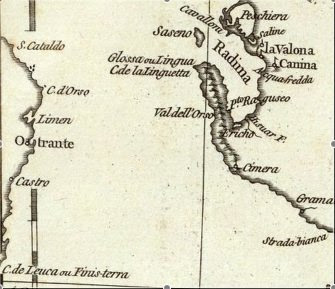 [5 August 09: See an account of the Corfu Channel Incident in October 1946]
Posted by sibadd